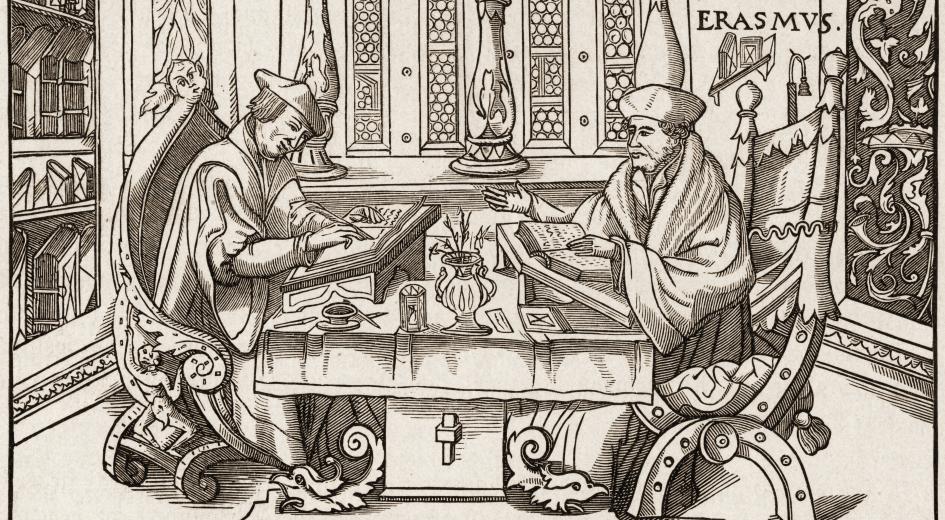 “I do not deny that I seek peace wherever possible,” Desiderius Erasmus (1466-1536) wrote at the start of the Protestant Reformation. “I believe in listening to both sides with open ears. I love liberty. I will not, I cannot serve any faction.”

No one else was talking that way from the pulpits or in the courts of Europe. In 1517, when Martin Luther nailed his 95 theses to the church door at Wittenberg, he was an obscure monk pleading for the church to reform itself. Four years later, his defense of the rights of conscience at the Diet of Worms—“Here I stand!”—created a social movement that terrified and incensed the Roman curia. Erasmus—philosopher, scholar, satirist—emerged as a singular voice urging peace, charity and mutual respect. “No one can deny that Luther calls for many reforms which brook of no delay,” he wrote. “Luther’s abrasiveness can be condoned only on the ground that perhaps our sins deserve to be beaten with scorpions.”

The authorities disagreed. The day after Luther’s act of defiance at Worms, the emperor declared him an outlaw. The Catholic Church excommunicated Luther; religious and political authorities burned and banned his writings. Princes began to choose sides in the widening Catholic-Protestant dispute. Soon all of Europe was poised for a religious-cultural war.

While declaring his fidelity to the Catholic faith, Erasmus came to Luther’s defense. Luther’s writings could not be suppressed, he said, without suppressing the gospel itself. Although Erasmus had no intention of being a martyr for Luther, he refused to call him a heretic: “The world is full of rage, hate, and wars,” he wrote. “It is no great feat to burn a little man. It is a great achievement to persuade him.”

Erasmus led a reform movement known as Christian humanism: a revival of classical learning to draw others into a deeper knowledge of Scripture and more authentic experience of faith. His philosophia Christi, “the philosophy of Christ,” was aimed at the individual believer, with an eye to the moral and spiritual transformation of society. “What else is this philosophy of Christ, which he himself calls being born again, but the renewal of a human nature well formed?”

In his satirical blockbuster, “The Praise of Folly,” Erasmus exposed the pretensions of clerics as scornfully as those of the political class. Referring to the academic hats of theologians, he warned, “Don’t be surprised when you see them at public disputations with their heads so carefully wrapped up in swaths of cloth, for otherwise they would clearly explode.” An unprincipled individual could not be a good governor, he said, because his venality would spread “like a deadly plague.” The just prince—rejecting the rage of factions and his own selfish ambition—must “give no thought to anything except the common good.”

As Christian unity began to disintegrate, Erasmus tried to avert violence. “You cannot conceivably address a credible prayer to the father of all men,” he wrote in “The Complaint of Peace,” “when you have just driven a sword into your brother’s bowels.” Erasmus constantly invoked the example of the love and mercy of Christ toward sinners, but he couldn’t prevent the religious wars of the 16th century. Protestants despised him for remaining loyal to Rome, while Catholic leaders condemned his pro-Lutheran sympathies. Luther called him “the king of amphibians,” and his works ended up on Rome’s Index of Prohibited Books.

Yet Erasmus’ spiritual outlook survived. The Netherlands, his birthplace, produced the most tolerant society in 17th-century Europe, and the English Reformation was shaped by his appeal for rational argument and moderation. English philosopher John Locke, an admirer, wrote his most important defense of religious freedom while in exile in Holland and in close contact with Erasmus’ disciples. Eventually, the Catholic Church embraced much of his spiritual vision. For decades the religious journal First Things, influential among Catholic intellectuals, has hosted an annual Erasmus Lecture.

The willingness to forsake partisanship in the pursuit of moral truth: Here is a partial remedy for the political and cultural rifts that seem to threaten our democratic republic. Jean Le Clerc, a Protestant scholar in Amsterdam, summarized the influence of Erasmus: “It cannot be doubted that he has contributed greatly to the enlightenment of his age and to preparing men to accept a day of which he himself has seen only the dawn.” America could benefit from another enlightenment, this time in the spirit of Erasmus.