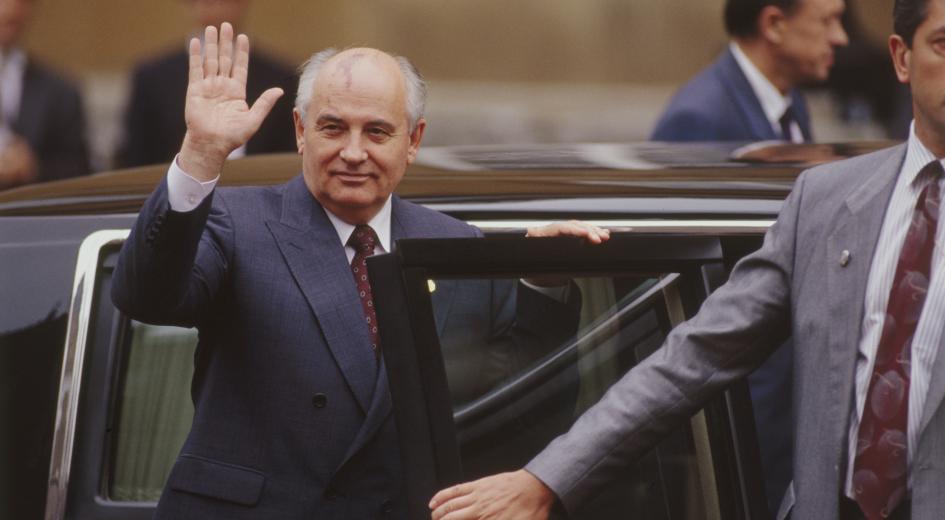 The Soviet Union’s revolutionary experiment in Marxism-Leninism was launched, at least in part, as an assault on the beliefs and ideals of biblical religion. Religion, according to Karl Marx, was “the opiate of the masses,” a fantasy enlisted to exploit the working class. Yet, on Christmas Day, 1991, it was Soviet communism that proved to be illusory: the day when Mikhail Gorbachev announced his resignation as president of the Soviet Union, marking its complete dissolution.

“This society has acquired freedom,” Gorbachev said. “It has been freed politically and spiritually, and this is the most important achievement that we have yet fully come to grips with.”

The irony should not be missed. Gorbachev, a lifelong atheist, personified the materialist assumptions of a political system that made its collapse virtually inevitable. The disintegration of the Soviet Union, following the 1989 democratic revolutions in Eastern Europe, was complete by the time Gorbachev made his farewell speech. Yet even in their final days, the communist leadership failed to grasp the importance of religious faith to the health of a political society.

Gorbachev entered office in 1985 as a reformer. His political manifesto, Perestroika, promised to make the Soviet Union “richer,” “stronger,” and “better.” With perestroika—restructuring—there would be “no stopping” Soviet society, and a “golden age” was ahead of them. At the same time, Gorbachev considered Marxism the inexorable force of the future. “We are motivated by the ideas of the 1917 October Revolution,” he said, “the ideas of Lenin.”

At the heart of the communist vision, however, is a degrading reductionism. Human beings, we are told, are motivated supremely by material needs. Communism strips them of those qualities that distinguish the human person from all other creatures: individualism, creativity, sacrificial love, the longing for transcendence.

“Capitalism can be utterly vanquished, and will be utterly vanquished,” Vladimir Lenin predicted, “by the fact that socialism creates new and much higher productivity of labor.” Joseph Stalin, who worshipped Lenin, accelerated the Soviet policy of converting “backward, individual farming” into large-scale “collective agriculture.” In a 1929 speech, “The Year of Great Change,” Stalin denounced the “sacred principle of private property,” which, he claimed, was “collapsing and crumbling to dust.” Two years later, the Soviet Union descended into a period of severe famine and horrific political violence.

What communism treated with contempt has proven to be one of the greatest sources of human flourishing in world civilization: the constitutional protection of private property, in all of its various expressions. This was one of the key insights of English philosopher John Locke, considered the father of political liberalism.

In Locke’s Two Treatises of Government (1689), he named “life, liberty, and property” as among the natural rights that governments were instituted to protect. By “property,” Locke meant much more than a person’s wealth and belongings. “Every man has a property in his own person. This nobody has any right to but himself,” he wrote. “The labor of his body, and the work of his hands, we may say, are properly his.”

Socialist critics of capitalism see only a clawing consumption, an economic theory fueled by greed. They ignore the profoundly religious outlook from which it emerged. Lockean liberalism insisted that every person was endowed by God with creative abilities and was called—in freedom—to engage in meaningful, honorable, productive work. “For men being all the workmanship of one omnipotent and infinitely wise Maker; all the servants of one sovereign Master, sent into the world by His order and about His business; they are His property.”

If God was the sovereign authority over all human life—the ultimate property owner—then robbing anyone of the fruit of his labor represented a crime against heaven. The West designed a political system centered on the individual as the sacred handiwork of the Creator. The chief aim of consensual government, therefore, was to safeguard individual rights, freedoms, and possessions. As Locke summarized it, “the supreme power cannot take from any man, any part of his property, without his own consent.”

Having dispensed with God, however, Soviet communism destroyed the “sacred principle” of private property. By treating individuals as means to an end—a workers’ paradise of equal social outcomes—the Politburo rationalized the systemic repression of human rights. Censorship, surveillance, show trials, purges, and reeducation camps became the norm. The result was economic stagnation and the collapse of civil society.

Most Western observers, however, failed to see what was happening. In his book After Brezhnev (1983), Robert F. Byrnes collected essays from 35 experts on the Soviet Union. Their conclusion: “The Soviet Union is going to remain a stable state, with a very stable, conservative, immobile government,” Byrnes said. “We don’t see any collapse or weakening of the Soviet system.” Harvard economist John Kenneth Galbraith proclaimed as late as 1984: “The Russian system succeeds because, in contrast to the Western industrial economies, it makes full use of its manpower.”

Ronald Reagan, whose deep Christian beliefs are often overlooked, discerned a religious dimension to the Cold War. “I believe that communism is another sad, bizarre chapter in human history whose last pages even now are being written,” he said in 1983. “I believe this because our source of strength in the quest for human freedom is not material, but spiritual,” and “it must terrify and ultimately triumph over those who would enslave their fellow man.”

In the end, even Gorbachev seemed to agree with him. In an astonishing confession, he renounced the entire communist apparatus as both a political and a moral failure. “The totalitarian system has been eliminated, which prevented this country from becoming a prosperous and well-to-do country a long time ago,” Gorbachev said. He praised the steps being taken toward democracy, privatization, and economic freedom. “We have paid with all our history and tragic experience for these democratic achievements, and they are not to be abandoned.”

The collapse of the Soviet Union was not merely a vindication of democratic capitalism, however. It offered a sober and ongoing warning to the West: Materialism, elevated to an ideology, destroys political and social life. Like any other idol, it breaks the hearts of its worshipers. “Man shall not live by bread alone,” declared the child of Bethlehem, “but by every word that proceeds from the mouth of God.”