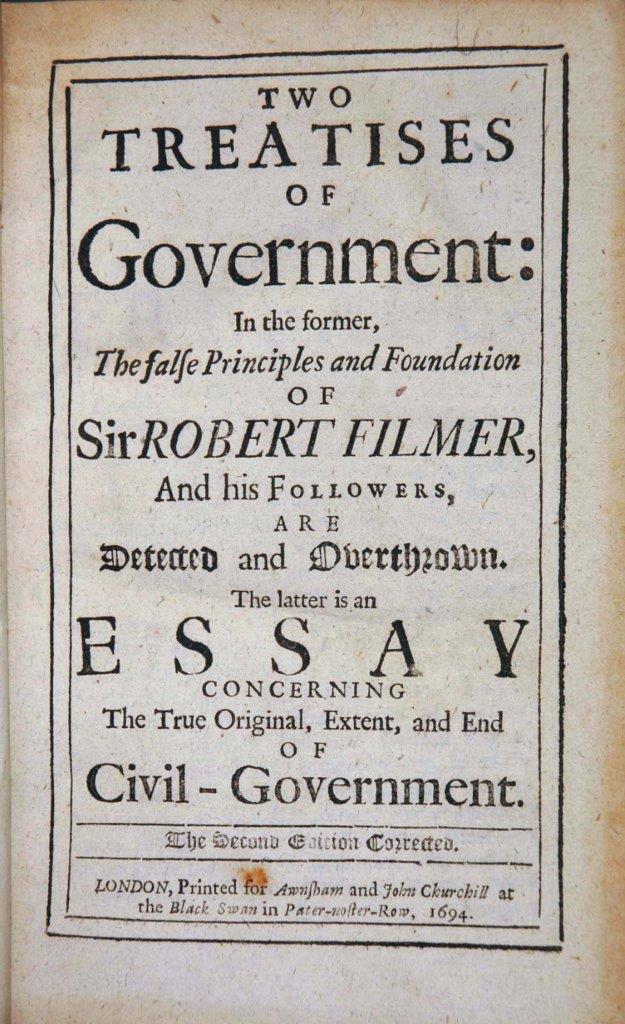 Ten years before the American Revolution, Charles Pratt, the chief justice of Common Pleas in Great Britain, took to the floor of the House of Lords to argue that members of the British Parliament “have no right to tax the Americans.”

Although the government had repealed the Stamp Act in March 1766, it immediately proposed the Declaratory Act, which insisted that Parliament had “full power and authority” to pass laws binding on the colonies. Pratt, also known as Lord Camden, saw a backhanded attempt to violate the “fundamental laws” of nature and of the English constitution by continuing to deny Americans representation in Parliament. At the heart of his argument was the political thought of one of Britain’s most celebrated philosophers: John Locke.

“So true are the words of that consummate reasoner and politician Mr. Locke,” Camden said. “I before have alluded to his book. I have again consulted him; and finding what he writes so applicable to the subject in hand, and so much in favor of my sentiments, I beg your lordships’ leave to read a little of this book.”

The book in question was Locke’s Two Treatises of Government (1689), the political tract that demolished the case for absolute monarchy and helped to set colonial hearts on fire. Indeed, the American Revolution was a Lockean Revolution: The Americans declared, for the first time, that a nation was coming into existence based upon a belief in human equality, freedom, and universal rights. Upon this foundation alone could government by consent be sustained. Wrote Locke: “The supreme power cannot take from any man, any part of his property, without his own consent.”

Camden spoke for nearly an hour and, although there is no transcript of his speech, he apparently quoted extensively from Locke’s Second Treatise. It is a good bet he made use of Locke’s ability to employ a grammar of natural rights grounded in biblical revelation. Unlike Thomas Hobbes, for example, Locke’s “state of nature” was framed by a moral order whose origin was the Divine will.

The state of Nature has a law of Nature to govern it, which obliges everyone, and reason, which is that law, teaches all mankind who will but consult it, that being all equal and independent, no one ought to harm another in his life, health, liberty or possessions; for men being all the workmanship of one omnipotent and infinitely wise Maker; all the servants of one sovereign Master, sent into the world by His order and about His business; they are His property…

Locke’s modern interpreters — from both the secular left and the religious right — often appear ignorant of his scriptural references. But American readers in the 18th century would have recognized lines from Paul’s letter to the Ephesians, describing men and women as the handiwork of God: “For we are his workmanship, created in Christ Jesus unto good works, which God hath before ordained that we should walk in them.” Locke based his entire approach to politics on an anthropology — a view of human nature — that drew its authority from the Bible, a book that most colonial Americans revered.

The governing authorities, Locke reasoned, must respect God’s relationship with the people he has created: They are “His property,” having been sent into the world “by His order.” Political absolutism, he wrote, robs God of His divine prerogative.

Thus, after “a long train of abuses,” when political rulers make their “design visible” for all to see, they “put themselves into a state of war with the people.” Whenever that happens, Locke warned, “it is not to be wondered that they should then rouse themselves, and endeavor to put the rule into such hands which may secure to them the ends for which government was first erected.”

The American revolutionaries found in this English theorist a political-theological ally. Governments preserve their legitimacy only by fulfilling the purpose for which they were instituted: the protection of our God-given rights and freedoms. To ignore these “self-evident” truths is to open the door to slavery and despotism — and revolution. As the Americans expressed it in their Declaration:

But when a long train of abuses and usurpations, pursuing invariably the same Object evinces a design to reduce them under absolute Despotism, it is their right, it is their duty, to throw off such Government, and to provide new Guards for their future security…

Why was Locke so influential in the American struggle for independence? No political author was cited more frequently. Ministers quoted him as enthusiastically as politicians: Samuel Cooper praised his “immortal writings”; Elisha Williams called him “the great Mr. Locke.” Even if Locke’s works were not explicitly mentioned, his rhetorical defense of human freedom, equality, and government by consent had permeated the thought of colonial America. In his groundbreaking book Locke: Two Treatises of Government (1960), Peter Laslett wrote that Locke established a set of principles for liberty and equality “more effective and persuasive than any before written in the English language.”

In his address to Parliament, Camden recognized Locke’s achievement with words that surely incensed his colleagues. In his “inestimable treatise,” he said, Locke had proved that “the people are justified in resistance to tyranny; whether it be tyranny assumed by a monarch, or power arbitrarily unjust, attempted by a legislature.” No wonder Camden’s speech was reprinted in numerous American newspapers and cited regularly in the pamphlet press.

The American Revolution is usually considered a radical event in political history, and it was. But it also exhibited a conservatism that is often neglected. In rebelling against their colonial masters, the Americans claimed their “chartered rights” as Englishmen and invoked a natural-rights tradition that Locke articulated with compelling power. “His principles are drawn from the heart of our constitution,” Camden explained, and formed the bedrock of England’s Glorious Revolution a century earlier. “I know not to what, under providence, the Revolution and its happy effects, are more owing, than to the principles of government laid down by Mr. Locke.”

Those principles — for which Locke became a fugitive and risked his life — included government by consent, the separation of powers, equal justice, and religious freedom. This English philosopher thus had a hand in two of the greatest political revolutions for human freedom in world history. That’s a legacy worth recalling this July 4.

Previous: National Review: Anti-Semitism Is an...