National Review: The Freedom Letter to the Romans 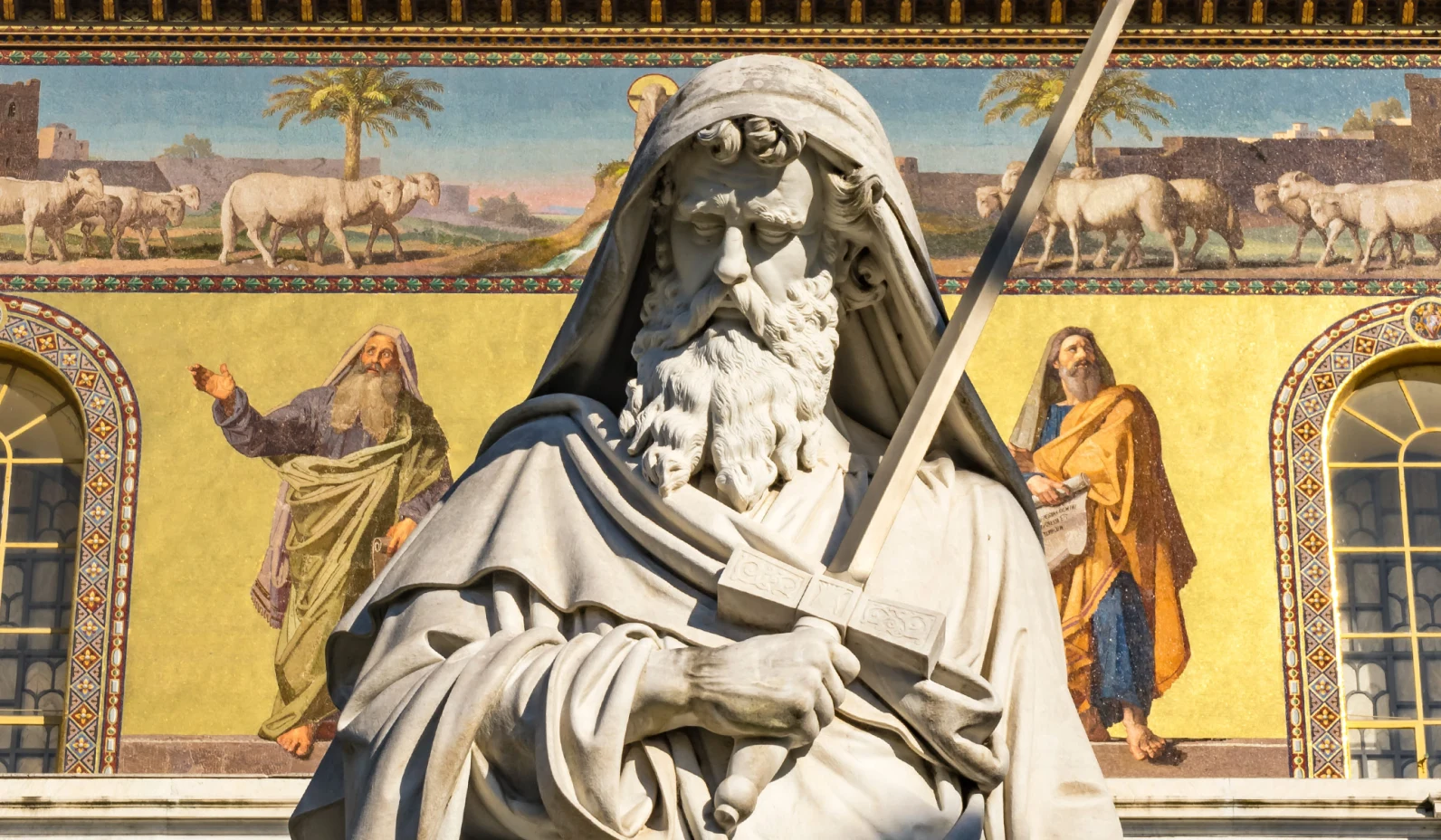 Rome, Italy — Outside the Basilica San Paolo Fuori le Mura, commonly known as the Basilica of Saint Paul, stands an imposing marble statue of a man who appears ready to do battle with the world. Bearded and hooded, he clutches a Bible in his left hand and a long cross in his right — but holds the cross over his chest as if it were a sword. It is a fitting representation of the man whose writings arguably have done more to rout the forces of bigotry and tyranny than those of any other figure in history.

Saul of Tarsus, an observant Jew who was renamed Paul after his dramatic conversion to Christianity, claimed a divine calling to bring the message of Jesus to those outside the Jewish faith, that is, to the Gentiles. His mission ended here when, according to tradition, he was executed by the authorities of Rome. Hence, the historical irony: Paul’s letter to the believers in Rome, the theological loadstar of the Christian church, helped to topple the regime that could not tolerate his uncompromising message of redemption.

A relentless evangelist with almost reckless courage, Paul is the dominant figure in the early decades of the Christian movement. Of the 27 documents that compose the New Testament, 21 are letters; 13 of them are attributed to Paul. His Letter to the Romans stands apart. Written around 57 a.d., near the end of his career, it contains the most thorough exposition of Christian doctrine in the Bible. It also advances concepts considered utterly radical for their time — ideas that would shape the course of Western civilization and the American political order.

In his Social Contract (1762), Jean Jacques Rousseau claimed that “Man was born free, and everywhere he is in chains.” Paul disagreed. To the apostle, every person was born into a state of spiritual slavery and death. Everyone stood guilty before a holy God, no matter what their achievements or circumstances: “All have sinned and fall short of the glory of God” (Romans 3:23). His second proposition remains as controversial today as when it first appeared: Jesus was sent by God to set people free, making salvation available to everyone through faith in his death and resurrection. “If you confess with your mouth that Jesus is Lord, and believe in your heart that God raised him from the dead, you will be saved” (Romans 10:9). The last proposition, which follows from the others, involves an astonishing universalism. “There is no difference between Jew and Gentile — the same Lord is Lord of all and richly blesses all who call on him” (Romans 10:12). The sacrifice of Jesus renders null and void the deep, cultural divisions within the human family; all are welcomed into God’s new spiritual community.

In a way no ancient text had contemplated, the Letter to the Romans introduced two great themes into the bloodstream of the West: human equality and human freedom. No ideas in the history of political thought would prove more transformative and ennobling.

Some of history’s most influential figures have considered Paul’s letter their north star. Scholars often draw attention to the role of the letter in the conversion of Augustine of Hippo. This saint’s Confessions (circa 400 a.d.) grew out of his meditations on Romans, Chapter 7, with its description of how faith in Christ empowers the individual to prevail in the struggle against sin. Yet Augustine’s epic defense of the faith, The City of God (426 a.d.), also owes an immense debt to the central themes of Romans. “In the city of the world both the rulers themselves and the people they dominate are dominated by the lust for domination,” he wrote, “whereas in the City of God all citizens serve one another in charity.”

More than a thousand years later, when Christendom was racked by a series of internal crises, an Augustinian monk turned to the Letter to the Romans in his own desperate quest to find peace with God. Martin Luther, a professor of the Bible at Wittenberg University, was initially terrified by the concept of the “righteousness of God” as described in Romans, Chapter 1. His insight — what he regarded as a recovery of the gospel of grace — completely upended his life:

I had greatly longed to understand Paul’s letter to the Romans. . . . I grasped the truth that the righteousness of God is that righteousness whereby, through grace and sheer mercy, he justifies us by faith. Thereupon I felt myself to be reborn and to have gone through open doors into paradise.

Unlike any work of literature or philosophy, it was Paul’s epistle that compelled Luther to launch what became the Protestant Reformation. He called the letter “the soul’s daily bread,” “the gospel in its purest expression,” and “a brilliant light, almost enough to illumine the whole Bible.” In his seminal treatise, The Freedom of a Christian (1520), Luther contrasted the liberty of the gospel, properly understood, with “the crawling maggots of man-made laws and regulations” imposed upon believers by church authorities. Luther’s teachings about spiritual freedom — what might be called a spiritual bill of rights — became a rallying cry throughout Europe.

In the 18th and 19th centuries, the themes of freedom and equality in the Letter to the Romans can be discerned in the beloved hymn, “Amazing Grace,” written by a former slave-ship captain, John Newton; in the social reform efforts of John and Charles Wesley; in the campaign to abolish the slave trade in Great Britain; and in the sermons that shaped the Protestant and democratic culture of colonial America. In the years leading up to the American Revolution, Jonathan Mayhew preached a widely disseminated sermon justifying rebellion against tyranny. His text was Romans, Chapter 13 — Paul’s instruction to believers to submit to political authorities:

Thus, upon a careful review of the apostle’s reasoning in this passage, it appears that his arguments to enforce submission, are of such a nature, as to conclude only in favor of submission to such rulers as he himself describes, i.e., such as rule for the good of society, which is the only end of their institution. Common tyrants, and public oppressors, are not entitled to obedience from their subjects, by virtue of anything here laid down by the inspired apostle.

John Adams, reflecting on the origins of the Revolution years later, cited Mayhew’s sermon as a factor in persuading pious believers of the legitimacy of political resistance. Mayhew may also have persuaded the more secular-minded Ben Franklin, whose proposed motto for the American seal was “rebellion to tyrants is obedience to God.”

The Letter to the Romans gained renewed prominence in the 20th century after the carnage of the First World War. In his Epistle to the Romans (1918), Swiss theologian Karl Barth shook off his attachment to theological liberalism and its illusions of human progress by meditating on the letter’s key doctrines. “The mighty voice of Paul was new to me,” he wrote, “and if to me, no doubt to many others also.” According to Catholic theologian Karl Adam, Barth’s recovery of the concept of man’s alienation from God and his need of divine grace dropped “like a bombshell on the theologians’ playground.” It is surely no coincidence that Barth was one of the first European theologians to recognize the apostasy of Nazism. He also was the lead author of the Barmen Declaration (1934), the first major ecclesiastical challenge to the racist ideology of the Nazi state.

The Reverend Dr. Martin Luther King, Jr. saw many parallels in his own life and that of the Apostle Paul. He used Paul’s Letter to the Romans like a battering ram in his campaign for civil rights. In a 1956 sermon in Montgomery, Ala., plainly modeled on Paul’s epistle, King warned American Christians, in the words of Paul, not to conform “to the pattern of this world,” but rather to recommit themselves to the binding moral and spiritual truths of the gospel:

Don’t worry about persecution America; you are going to have that if you stand up for a great principle. I can say this with some authority, because my life was a continual round of persecutions. . . . I came away from each of these experiences more persuaded than ever before that ‘neither death nor life, nor angels, nor principalities, nor things present, nor things to come . . . shall separate us from the love of God, which is in Christ Jesus our Lord.’ I still believe that standing up for the truth of God is the greatest thing in the world.

King’s citation, from Romans, Chapter 8 — about the relentless love of God in the face of great evil — was a spiritual anchor in his long struggle for justice. Like Paul, his sense of vocation led to persecution, imprisonment, and, ultimately, a violent death.

Historians debate Paul’s precise motives for writing his treatise to the Christians in Rome. By virtue of its location in the seat of the Roman Empire, the church at Rome was a thoroughly cosmopolitan congregation: a mix of Jews and Gentiles, rich and poor, citizens and slaves. Paul told the believers that he planned to visit them on his way to Spain. Instead, the apostle found himself under arrest and taken to Rome to await trial. He made good use of his confinement: He wrote four letters to other Christian churches that became part of the New Testament canon. As a Roman citizen, Paul was allowed a measure of freedom, and for two years he “welcomed all who came to him, proclaiming the kingdom of God and teaching about the Lord Jesus Christ with all boldness and without hindrance” (Acts 28:30-31).

Eventually, not even Rome’s emperors could resist the gospel message to which Paul devoted his life. As historian Ernle Bradford described it in Paul the Traveler, the apostle never hesitated to hurl himself into the center of the storm: “Rome was always what he sought, the heart of power, the heart of darkness, where he could set fire to the aspirations of millions.” Nearly 2,000 years after Paul’s martyrdom, the hope of freedom and redemption burns steadily in nearly every corner of the world.

Previous: National Review: A New Order for the...
Next: The National Interest: To Many Refug...