This article was originally posted at Law & Liberty. 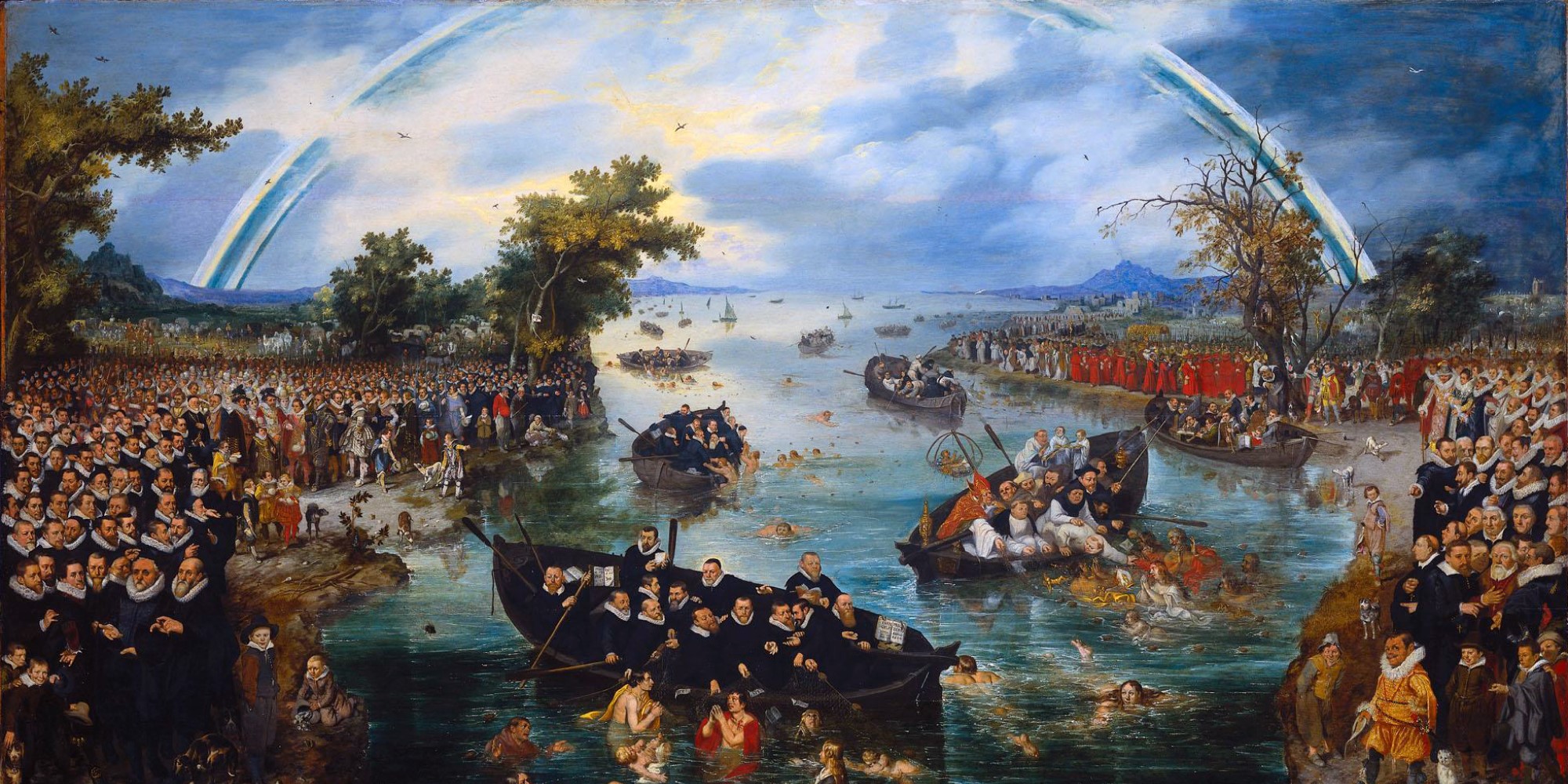 At the start of Europe’s wars of religion, a Dutch playwright advanced what was arguably the most visionary defense of freedom of conscience ever to appear during the first 1500 years of Christianity.

Dirck Coornhert, a patriot involved in the Dutch revolt against Spain, published Synod on the Freedom of Conscience (1582), a rebuke to both Protestant and Catholic belligerents in light of the moral demands of the gospel. Though rejected in his own day, Coornhert’s even-handed criticism of the intolerant policies of fellow believers would inspire the political outlook of John Locke and, eventually, the American Founders. In our own age of bitter partisanship, Coornhert’s Synod recalls the virtues necessary for a unified and just political order.

Coornhert was born 500 years ago, in 1522, when Martin Luther’s Protestant Reformation was sending shock waves throughout Christendom. By the time he wrote the Synod, the breach was irreparable. The Catholic Church had condemned Protestantism as a heresy at the Council of Trent (1545-1563). The French wars of religion (1562-1593) already had claimed thousands of casualties among the Catholic and Protestant communities of France. With the spiritual unity of Europe shattered, sectarian violence threatened to destroy the social fabric of European society.

“Hateful partisanship makes us give false testimony against each other and makes us often accuse others of shortcomings that we ourselves are guilty of inside,” Coornhert wrote. “When it comes down to our own sins we are mild judges, but we are unforgiving towards the sins of others.”

That’s a pretty apt summary of the state of affairs in cancel-culture America. Moreover, not unlike the intense tribalism of American life, Coornhert’s fictional Synod is set in the multi-faith society of the Netherlands, where Anabaptists, Arminians, Calvinists, Catholics, Libertines, Lutherans, Zwinglians and others lived in a state of frequent dispute and friction.

Modeled on the humanist colloquies of the period, the Synod is a nineteen-part dialogue between Catholic and Protestant spokesmen that exposes the hypocritical and intolerant policies of both camps. It is stocked with prominent religious figures, including the Spanish Dominican Melchior Cano; John Calvin, the Reformed leader from Geneva; and Johannes Brenz, a Lutheran minister from Germany. The Synod quotes verbatim from their works, and each session ends with a summary of the various positions. An alternative view is offered by Gamaliel—Coornhert’s alter ego—a figure based on the Pharisee in the New Testament who counsels restraint to religious leaders plotting against Jesus’s disciples.

The unifying thread to the Synod is the Golden Rule: treat others as you wish to be treated. Gamaliel reminds the Reformed delegates, for example, that their Catholic adversaries are members of the same human family. They “are fellow human beings who, just like us, prefer to be kindly tolerated rather than violently forced.” No follower of Jesus, Gamaliel insists, can escape the ethical core of his teaching: “This law applies to both, indeed to all parties. We are all subjected to this law and I wish fervently that we would all act in accordance with it.”

The Union of Utrecht (1579) had enshrined freedom of conscience as the basis of the Dutch Republic; no one was to be punished because of his religious beliefs. Nevertheless, the Reformed Church held an official religious monopoly and prohibited or penalized non-conforming faiths. Coornhert himself had been muzzled by the authorities for criticizing Reformed ministers in print, and he devotes an entire session in the Synod to defending freedom of the press and freedom from censorship. As biographer Gerrit Voogt summarizes it, for Coornhert “free debate and disputation were the lifeblood of a healthy republic.”

Although Coornhert emphasized the inner life of faith over traditional Christian doctrine, he was never flippant about religious belief or the desire to honor the teachings of the Bible in public life. The antidote to false or controversial teaching, he believed, was not state-sanctioned crackdowns. Rather, the remedy was “to kill the heresy by means of the truth”—that is, to discuss and debate the meaning of the Scriptures. If the goal was to lead people into a deeper commitment to Christ, he reasoned, “what weapons could then be more useful or necessary to you than the power of God?”

The Synod doesn’t explain how a multi-confessional state might function. But it articulates political principles that would supply the building blocks for a more liberal society. In a striking passage, Coornhert quotes a Reformed author who wrote that because men and women are spiritual beings by nature, no authority could “drive religion from the heart,” the realm over which God retains exclusive authority:

The prosperity of the kingdom requires solid and sincere concord among all inhabitants. Now we can only have solid concord when all inhabitants enjoy common and equal rights, and this especially in religion. That is why the king should embrace all his subjects with a common and equal love, and this especially in the greatest and weightiest matter of all, religion. It is rooted so deep in people’s hearts that one could not find a better or more lasting seal of concord anywhere.

We must not miss the radical quality of the Synod’s argument. The unquestioned assumption in Coornhert’s day, held by Protestants as well as Catholics, was that the prince should use his political authority to uphold the teachings of the favored, established religion. This meant enforcing doctrinal conformity and punishing dissenters—with civil penalties, prison, banishment, or execution. It was an article of faith that the alliance of church and state toward this end was the only hope of establishing political unity and social peace.

Yet Coornhert reproves Lutherans, Reformed, and Catholics alike for forbidding each other’s teachings whenever they gain political power and “have the magistrate on their side.” He then flips the argument for stability on its head. If the prince seeks political security, he must not play favorites in matters of religion: “But wise politicians call inequality among the inhabitants or citizens of a country a pestilence to the commonwealth, as by the same token equality is the strongest bond of concord and stability.”

In a way that almost no one in the West had ever attempted, Coornhert made a biblical argument that the flourishing of the state depended upon the principle of equal justice: Every person, regardless of religious belief, must enjoy equal rights under the law.

A century later, this idea, known as the “great rule of equity,” began to take hold. “In the course of the seventeenth century,” writes historian Perez Zagorin, “the Dutch Republic acquired the reputation of being the most tolerant, pluralistic society in Europe.” This concept became a central element in John Locke’s proposal for a multi-faith political community. When he was in political exile in the Netherlands in the 1680s, just before he wrote his great defense of religious liberty, Locke acquired Coornhert’s Synod along with other tolerationist works. The primary duty of the civil magistrate, Locke explained, was the “impartial execution of equal laws” for all citizens of the commonwealth. “The sum of all we drive at,” he wrote in A Letter Concerning Toleration (1689), “is that every man enjoy the same rights that are granted to others.”

It is true that Locke, though considered the father of the liberal project, would not extend equal rights to atheists. He shared the widely held view that “the taking away of God, though even in thought, dissolves all.” No one imagined that private morality and public virtue could be sustained without belief in a Creator. Nevertheless, in this principle of equity we can discern the political application of the Golden Rule, the moral taproot of constitutional democracy. Here is a vision of a pluralistic society, where the equal protection of fundamental rights creates a unified political community.

To reject this vision in order to defend “orthodoxy,” warned Coornhert, invited the judgment of heaven. “The prophets, the apostles, so many thousands of martyrs, and even the Son of God were put to death under the color of religion,” he wrote. “One day an account must be given of all this blood by those who have been shedding it so frivolously when they struck blindly during the night of ignorance.”

One could argue that the age of ignorance has returned: Coornhert would likely recognize the vengeful and apocalyptic rhetoric that characterizes American political discourse. He would challenge Americans to put aside partisan loyalties, treat one another as “fellow human beings,” and seek the good of the commonwealth. Other thinkers would play their part in the journey toward a more just and democratic society, notably in England and the American colonies. But it was a Dutchman, half a millennium ago, who pierced the darkness of his age and took a courageous stand for human freedom.