Weekly Standard: In Praise of Folly 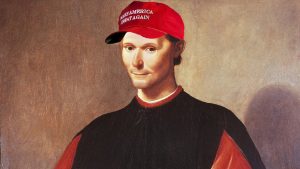 The presidency of Donald Trump, nearly a year old, has revived a political debate that began in earnest in sixteenth-century Europe: does a nation require leaders of good moral character in order to flourish?

Niccolo Machiavelli, who witnessed the violent collapse of the Florentine Republic, famously answered the question in the negative: Politicians must often commit acts of evil to maintain public order and unity—and they shouldn’t be troubled by this reality. “How praiseworthy it is for a prince to keep his word and to live with integrity and not by cunning, everyone knows,” he wrote in The Prince (1513). “Nevertheless, one sees from experience in our times that the princes who have accomplished great deeds are those who have thought little about keeping faith and who have known how cunningly to manipulate men’s minds.”

Trump is hardly the first president to put Machiavelli’s thesis to the test. What is stunning, though, is how he so easily has persuaded social and religious conservatives—the self-styled guardians of American virtue—that Machiavelli was right. How else to explain the enthusiasm among evangelicals for Trump, despite his unscrupulousness? They transformed Alabama’s Roy Moore, credibly accused of making sexual advances on teenage girls, into “God’s vessel” to advance Trump’s political agenda. They compare Trump, a conniving business mogul and reality television host, to Winston Churchill, the soldier-statesman who helped to rescue Western Civilization from Nazi barbarism.

Perhaps it’s time to recirculate a sixteenth-century blockbuster, In Praise of Folly (1511), the most trenchant rebuttal to the Machiavellian outlook ever written. Composed by the Christian humanist Desiderius Erasmus, it exposed the debased morality of the political and religious authorities of his day.

The work is narrated by Folly, wearing the costume of a fool and standing before an eager crowd to extol her own virtues. “I follow that well known proverb,” she explains, “which says that a person may very well praise himself if there happens to be no one else to praise him.” A leader can surround himself with flatterers and sycophants, she says, yet remain “a man ignorant of the law, almost an enemy to the common good, intent on advancing his own private interests, addicted to pleasure, a man who hates learning, who hates liberty and truth…”

In Praise of Folly skewers the idea that a perverse man could be a good governor: his corruption would spread “like a deadly plague” and infect the commonwealth. Public office imposed upon rulers a high standard of conduct, “so that he may either promote the welfare of his people by his spotless character, like a beneficent star, or he may, like a baleful comet, bring disaster upon them.” The just prince—rejecting the clamor of factions, the politics of tribalism, and his own private whims—must “give no thought to anything except the common good.”

In Renaissance Europe, where popes still functioned as kingmakers, political reform was nearly impossible without reform in the churches. Although a lifelong Catholic, Erasmus singled out the church establishment for its hypocrisy and spiritual pride. Folly chides clerics for “looking down from high above on all other mortals as if they were earth-creeping vermin almost worthy of their pity.” She upbraids believers for being “far more taken with appearances than reality.” She mocks theologians who wear close-fitting caps to distinguish themselves in public. “Therefore, don’t be surprised when you see them at public disputations with their heads so carefully wrapped up in swaths of cloth,” she explains, “for otherwise they would clearly explode.”

In Praise of Folly was condemned by the Catholic Church, excoriated by church authorities, and placed on the Index of Prohibited Books. It didn’t matter. The book’s subversive appeal could hardly be contained. During Erasmus’s lifetime, thirty-six editions appeared from the presses of twenty-one printers in eleven cities. His withering assessment of church and state touched a nerve, and arguably laid the groundwork for the Protestant Reformation.

Machiavelli effectively produced a how-to guide for cynically preserving the status quo. To maintain order, he wrote, a ruler “must often act against his faith, against charity, against humanity, and against religion.” To Erasmus, these were the tactics of Folly: the path to political ruin, social unrest, and cultural rot. There is truth in Machiavelli’s dictum that it is better to be feared than loved. But Erasmus believed that this brand of political realism, detached from religious conscience, would end in futility. As he warned elsewhere: “He who is feared by all must himself be in fear of many, and he whom the majority of people want dead cannot be safe.”

A man of letters and a counselor to princes, Erasmus was not naïve about the will to power. But, unlike Machiavelli, he was devoted to a program of social reform based on “the philosophy of Christ”—the teachings and example of Jesus—and rejected cynicism in all its forms. Against Machiavelli’s duplicitous secular prince, Erasmus wanted rulers trained in Christian ethics and morality. As Folly sardonically boasts: “I consider that I am being worshiped with the truest devotion when men everywhere do precisely what they now do: embrace me in their hearts, express me in their conduct, represent me in their lives.”

In the age of Trump, many have built a temple to Folly, burned incense, and bowed the knee at her altar. She has a habit, though, of betraying her worshippers and turning devotion into disillusionment.

One Response to Weekly Standard: In Praise of Folly