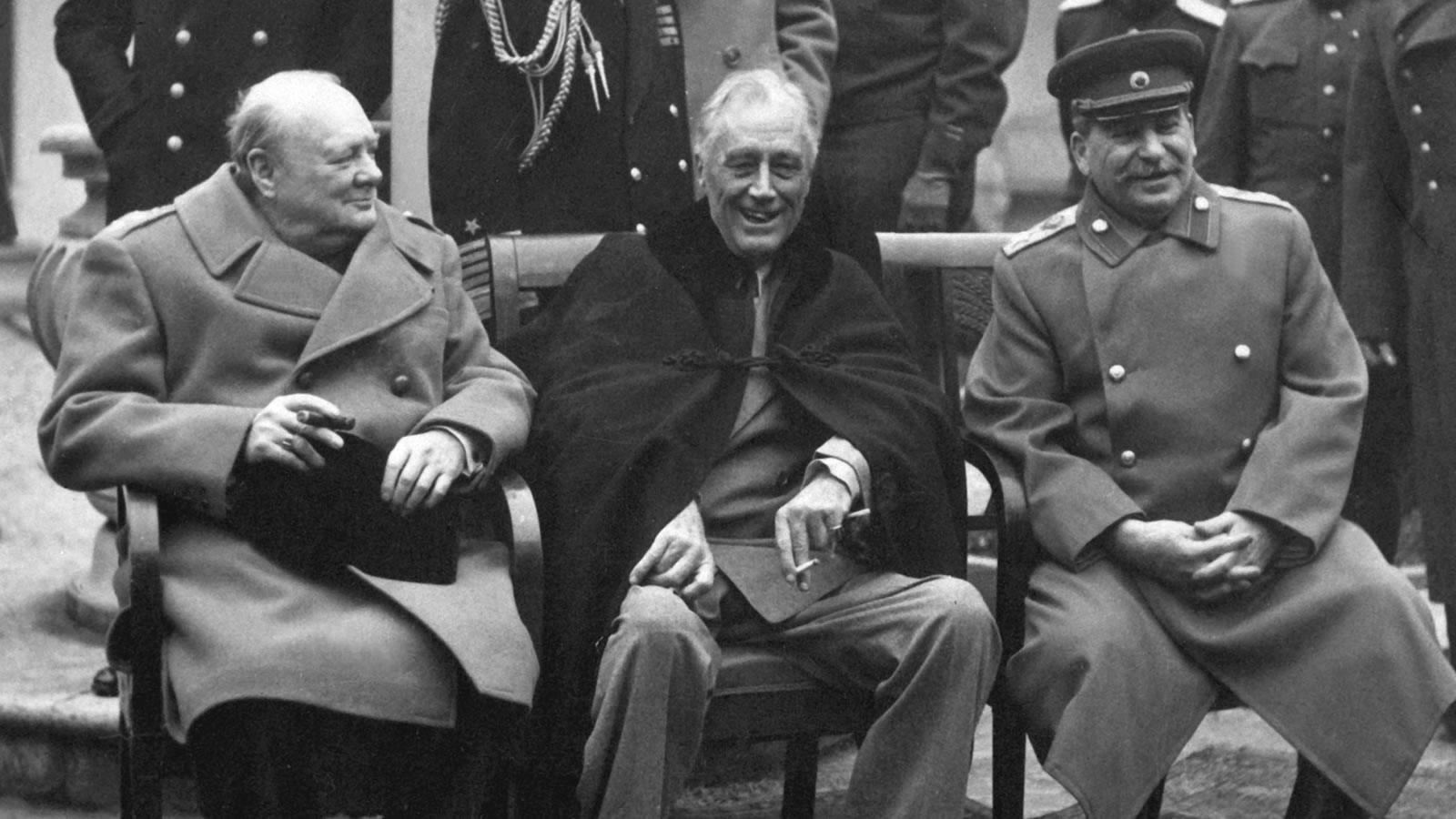 No speech from a foreign visitor ever created a greater uproar than that delivered by Winston Churchill at an obscure Midwestern college just months after the end of the Second World War. As it turned out, no speech proved more prophetic about the deadliest assault on human freedom in the history of world civilization.

Many expected Churchill’s talk at Westminster College in Fulton, Mo., on March 5, 1946 — modestly titled “The Sinews of Peace” — to reflect on the defeat of fascism by the three great wartime allies, the United States, Great Britain, and the Soviet Union. Instead, it was a message of foreboding. A new crisis moment for Europe, and for the world, had arrived: a struggle between communism and the democratic West. “A shadow has fallen upon the scenes so lately lighted by the Allied victory,” Churchill warned. “From Stettin in the Baltic to Trieste in the Adriatic, an iron curtain has descended across the Continent.”

Left-leaning historians blame Churchill’s address as the catalyst for the Cold War. Eleanor Roosevelt, carrying on the political legacy of her dead husband, was aghast, fearing that Churchill’s message would compromise the peacekeeping mission of the newly created United Nations. The liberal press denounced the talk as “poisonous” and Churchill as a “warmonger.”

A truly noxious speech, however, had been delivered by Joseph Stalin just a few weeks earlier to Communist Party apparatchiks in Moscow. Largely forgotten today, it did about as much to expose the unbridgeable divide between East and West as Churchill’s peroration.

“It would be wrong to think that the Second World War broke out accidentally,” Stalin began. “As a matter of fact, the war broke out as the inevitable result of the development of world economic and political forces on the basis of present-day monopolistic capitalism.” Thus, Stalin repeated Marx’s assault on capitalism for distributing resources unequally. He parroted Lenin’s claim that greedy capitalist states inevitably went to war with one another. Peace was possible, he suggested, but only after communism had triumphed around the globe. The message was clear: The historic contest between socialism and democratic capitalism was at a high-water mark.

Stalin’s address was a tissue of lies and omissions. He portrayed the Soviet Union as the fierce opponent of fascist rule in Europe. In fact, Stalin made a secret pact with Hitler’s Germany to divide up the continent among themselves. The agreement allowed the Soviet Union to invade and occupy eastern Poland in 1939 as Hitler invaded from the west, triggering the Second World War. For 22 months, in fact, the Soviet Union and Nazi Germany were allies; Germany sold weapons to the USSR and the USSR sold grain and oil to Germany.

Stalin also assured his audience that the policy of collectivized agriculture was “an exceedingly progressive method” to modernize the Soviet economy. In reality, the forced collectivization of private farms, begun in 1928, created a human catastrophe. Many peasants fought to hold onto their plots of land: five million were deported and never heard from again. The government seized their grain, and the result was a man-made famine. By 1934, upwards of 13 million Soviet citizens died unnatural deaths — from mass murder and starvation — because of Stalin’s communist vision.

Ironically, Stalin spoke the truth when he boasted that “no skeptic now dares to express doubt concerning the viability of the Soviet social system.” At least 700,000 “skeptics” — anyone even mildly critical of Marshal Stalin — were murdered during the “Great Purge” of 1936–38. The secret police, show trials, assassinations, torture, prison camps, ethnic cleansing: Virtually no tool of terror was left untried to silence dissent.

All these facts informed Churchill’s assessment of the Soviet Union. But the most alarming truth about Stalin’s Russia was its forcible absorption of Eastern Europe into the communist fold. For months, Churchill had watched with growing apprehension as Stalin violated the agreements he made with the Allies at their 1945 Yalta Conference, promising free and democratic elections in Eastern Europe. Communist fifth columns were now at work, wholly obedient to Moscow.

“The Communist parties, which were very small in all these Eastern States of Europe, have been raised to preeminence and power far beyond their numbers and are seeking everywhere to obtain totalitarian control,” Churchill said. “Whatever conclusion may be drawn from these facts — and facts they are — this is certainly not the Liberated Europe we fought to build up.”

Every description Churchill offered of Soviet designs over Europe proved entirely accurate. His judgment of communism as “a growing challenge and peril to Christian civilization” was being validated in every state that fell under its malign influence.

Indeed, America’s most important diplomat in Moscow had reached the same conclusions at almost precisely the same moment. George F. Kennan’s “Long Telegram,” arguing for a policy of “firm containment” against the Soviet Union, arrived at the State Department just days before Churchill arrived in Fulton. “It is clear that the United States cannot expect in the foreseeable future to enjoy political intimacy with the Soviet regime,” Kennan wrote. “It must continue to expect that Soviet policies will reflect no abstract love of peace and stability, no real faith in the possibility of a permanent happy coexistence of the Socialist and capitalist worlds, but rather a cautious, persistent pressure toward the disruption and weakening of all rival influence and rival power.”

Franklin D. Roosevelt’s delusional portrait of Stalin as “Uncle Joe,” a cheerful partner in building a global democratic community, was dead in the water. Nevertheless, it is difficult, from our historical distance, to grasp the feeling of dread that Churchill’s words must have caused in a war-weary population. He clearly sensed the enormous task he was asking his American audience to embrace: to engage its economic, military, and moral resources to check Soviet ambitions in Europe and beyond. “I do not believe that Soviet Russia desires war,” he said. “What they desire is the fruits of war and the indefinite expansion of their power and doctrines.”

The United States, he suggested, must not make the mistake it made after the First World War, when it abandoned the League of Nations and left Europe to its fate. It must help ensure that the United Nations will become an effective force for peace and security, “and not merely a cockpit in a Tower of Babel.” Most importantly, though, Churchill called for a “special relationship” between America and Great Britain: the sharing of military intelligence, mutual-defense agreements, and strategic cooperation to support and promote democracy.

Their common democratic ideals, he explained, were the basis for a unique partnership to thwart the despotic aims of Soviet communism:

We must never cease to proclaim in fearless tones the great principles of freedom and the rights of man which are the joint inheritance of the English-speaking world and which through the Magna Carta, the Bill of Rights, the Habeas Corpus, trial by jury, and the English common law find their most famous expression in the American Declaration of Independence. . . . Here is the message of the British and American peoples to mankind.

Critics denounced this language as rank chauvinism and cultural imperialism. Legendary columnist Walter Lippmann called the speech an “almost catastrophic blunder.” In an interview with Pravda, dutifully transcribed in the New York Times, Stalin compared Churchill to Hitler: “Mr. Churchill, too, has begun the task of unleashing war with a racial theory, stating that only nations that speak the English language are . . . called upon to rule the destinies of the whole world.”

Any frank assessment of how the Cold War ended, however, would admit the decisive role played by the United States and the United Kingdom, over the course of four decades, in resisting Soviet aggression. The Berlin airlift, the creation of the North Atlantic Treaty Organization, the defense of Western Europe, the support for the democratic revolutions in Eastern Europe that brought down the Soviet empire — in each case the “special relationship” between America and Great Britain tipped the scales toward freedom.

In a remarkable moment of candor, Mikhail Gorbachev, who presided over the dissolution of the Soviet Union, endorsed the central message of Churchill’s speech in his farewell address on Christmas Day, 1991. The Cold War, “the totalitarian system,” “the mad militarization” that “crippled our economy, public attitudes and morals” — it all had come to an end, and there was no turning back. “I consider it vitally important to preserve the democratic achievements which have been attained in the last few years,” he said. “We have paid with all our history and tragic experience for these democratic achievements, and they are not to be abandoned, whatever the circumstances, and whatever the pretexts.”

Seventy-five years ago, Churchill dared to imagine such an outcome. But it depended upon these two great democratic allies, Great Britain and the United States, sharing a “faith in each other’s purpose, hope in each other’s future, and charity towards each other’s shortcomings.” And, with history as a guide, such an outcome would not arrive without a supreme effort of national will. “If all British moral and material forces and convictions are joined with your own in fraternal association,” he said, “the highroads of the future will be clear, not only for us but for all, not only for our time, but for a century to come.”

One Response to National Review: Churchill’s Prophetic Warning: ‘An Iron Curtain Has Descended’