This article was originally posted on SE Cupp 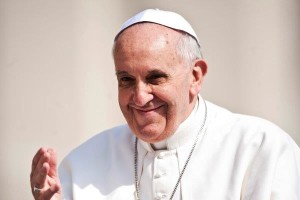 Should the Pope Address Climate Change?

This week Pope Francis will visit Washington DC, and on Thursday he’ll deliver a message to Congress that calls for more action on climate change. The Pope’s June encyclical on climate change, which was highly critical of Western consumerism, angered some conservatives, who argue the Pope should stay out of matters of science.

I asked my friend Dr. Joe Loconte, professor of history at The King’s College, to debate this with me. He is author of “A Hobbit, a Wardrobe, and a Great War: How J.R.R. Tolkien and C.S. Lewis Rediscovered Faith, Friendship, and Heroism in the Cataclysm of 1914-1918.”

The following is our conversation:

SE: Many of my fellow conservatives seem to take issue with the Pope addressing climate change. While I’m skeptical not of its existence but of the causes and proposed solutions, I think this is completely within the Pope’s purview. For one, the Vatican has long grappled with issues of scientific scrutiny. The Catholic Church endorsed much of Aristotle’s thinking on the natural world. If I recall, Galileo — a Catholic — met with the business end of the Church for insisting the Earth moved around the sun. (Incidentally, 350 years later, the Church would agree.) Why is climate change a topic that Catholics like Jeb Bush and Rick Santorum think the Pope must avoid?

JL: Christian leaders are on solid ground when they argue from the Bible to defend the dignity of every person, or the obligation to respect and care for God’s creation, the physical world that He has given us as a gift.

But Pope Francis has wandered into a swamp with some of his statements about climate change and what to do about it. “The Church does not presume to settle scientific questions or to replace politics,” he says. The Catholic Church, unfortunately, has a history of doing exactly that—and the pope risks repeating that mistake by endorsing much of the rhetoric and agenda of the ideological left. When the pope claims that there is “an urgent need of a true world political authority” to confront environmental problems, he succumbs to the lure of utopian politics—and invites the soul-destroying hand of the omnicompetent State.

SE: Ha! And here I thought Donald Trump was the “soul-destroying hand of the omnicompetent state.” But I digress.

Even if conservative Catholics disagree with the Pope’s political position on global warming, does he need to be “right” on the science or “right” on the politics to be impactful? Some Catholics may disagree with the Pope’s softened language on homosexuality or divorce or gun control. But I imagine it brings more parishioners into the flock when he addresses relevant issues in the news.

My concern, as a nonbeliever who nonetheless wants a strong and vital Church, is that divorcing the Pope from matters of scientific scrutiny only reinforces the secularists’ insistence that science and religion are mutually exclusive and cannot inform one another. Shouldn’t the Church look for ways to draw the two together and denounce the view that to be religious one must deny science, and to adhere to science one cannot believe in God?

JL: While we’re digressing, allow me, in a spirit of mutual fear and loathing, to agree that a Trump presidency would set loose a legion of demons, political and otherwise.

Look, I’m all for dismembering the secularist dogma that religious belief is incompatible with the scientific quest. Most people forget that all the early scientists—Galileo, Kepler, Copernicus, Newton—believed that human reason could discover the physical laws governing the universe because they believed that an intelligent and rational God had created it. I appreciate a pope who insists that people of faith take seriously the conclusions of the scientific community.

But the pope shouldn’t be naïve about how science is often politicized to advance social agendas. Francis Galton, the father of the eugenics movement at the turn of the twentieth century, represented the “scientific consensus” about the desirability of manipulating the human gene pool. “It [eugenics] must be introduced into the national conscience,” Galton said, “like a new religion.” It frankly stuns me that the spiritual leader of the Catholic Church does not see how the climate change agenda has become a substitute religion for many of its supporters. This fact alone ought to give us pause.

SE: I agree…expressing a modicum of skepticism of climate change science — an exercise science should endorse! — is an apostasy. But since you bring up Galton…

The abortion debate, for those of us on the side of life, has been bolstered by scientific technologies that help illustrate how early a baby develops. Pro-choice advocates might too argue that science has been politicized to advance a social cause. Should the Vatican use only the science that pleases political conservatives?

JL: Nice point: I like moral consistency (although I confess to liking it a little less when it seems at odds with my argument). And I don’t want to see the Catholic Church, in the name of “science,” become an appendage to any political party.

Part of the problem, I think, is that the scientific community has taken on an artificial aura of authority and infallibility. Science can tell us a lot about how our world works, but it can’t tell us how our world ought to work—it can’t settle those moral question for us. We have to work those questions out for ourselves, using our reason, conscience, and religion.

SE: Well, as an atheist, I think science can play a crucial role in informing moral and ethical arguments. Science, and not religion, has taught me the vastness of the universe, and the precarious nature of human life within it, to appreciate the interconnectivity of living things and the responsibility we have to better our shared communities. Science may be incomplete — there are plenty of mysteries still unsolved — but I think when someone as influential as the Pope attempts to bridge science and religion, it goes a long way in bringing two existentially vital communities together, instead of pushing them farther apart.

JL: I agree that science can help inform a debate about a moral issue. It can give us a sense of the frailty, and wonder, of our human existence—not a bad reason for humility and a thirst for meaning. But I don’t see how scientific theories teach us “the responsibility we have to better our shared communities.” If we applied a moral logic to evolutionary theory, we could end up with a Hobbesian war of the strongest against everyone else (which of course has been tried). As a Christian, I think religion needs the scientific mind to help check its excesses. But science needs a moral and spiritual outlook to keep it from reducing human beings to raw material.

SE: As usual, you make a beautiful and eloquent argument about the spiritual and intellectual fulfillment religion can offer. As for me, if you believe in evolution, as I do, you feel a real connectedness to fellow man and our shared evolutionary beginnings. Survival of the fittest is a reminder to invest in the common experience for the betterment of the individual and the collective. Evolution may occur gradually and slowly, but microcosmic investments make a difference. I find meaning in knowing I am here for a finite time, and so must make the most of it.