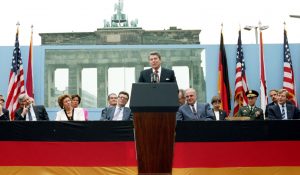 On June 12 — 31 years to the day after Ronald Reagan stood at Germany’s Brandenburg Gate and called on Soviet leader Mikhail Gorbachev to “tear down this wall” — Donald Trump and Kim Jong-un will hold a historic summit in Singapore. The significance of the date should not be lost on anybody.

The speed with which relations between North Korea, South Korea, and the United States have improved — superficially, at least — is extraordinary. Only a few months ago, President Trump was warning Kim that the United States was prepared to rain down nuclear “fire and fury” on North Korea. The world seemed poised on the brink of war. Two weeks ago, however, Kim entered the world stage as the model of conviviality, embracing South Korea’s president, Moon Jae-min, at Panmunjom. For Trump, Kim went from being “rocket man” to “an honorable man.” The headlines might have read: “Rocket Man Lands on Moon.”

But euphoria and naïveté must be avoided. Indeed, wisdom and caution will be required, along with boldness and creativity, if the possibility of ending the state of war that has existed on the Korean peninsula for more than 50 years is to be seized. Likewise, if the opportunity presents itself to stop North Korea’s nuclear program — and even move towards denuclearization — it would be foolish to reject it. Olive branches, when offered, should generally be welcomed, not trampled underfoot. That was one of the lessons of the approach taken by Ronald Reagan, Margaret Thatcher, and St. John Paul II in their dealings with the Soviets: From a position of strength, they responded to Gorbachev’s overtures with a generosity of spirit.

Yet there is one crucial aspect of Reagan’s Berlin Wall speech — and indeed the entire philosophy of Reagan, Thatcher, and John Paul II — that made them ultimately successful, and that so far appears to be missing from the North Korea narrative: placing the values of freedom, human dignity, and human rights at the heart of the conversation.

By virtually any measure, North Korea is the most closed and repressive society on earth. The United Nations has accused the regime of crimes against humanity that are “in a category of their own” and “without parallel.” In 2014, a UN Commission of Inquiry called for Kim Jong-un to be prosecuted at the International Criminal Court. At least 100,000 people languish in prison camps, subjected to slave labor, sexual violence, and torture. To be a Christian, to be found secretly worshipping or to possess a Bible, could earn you execution or a lifetime in a prison camp. Family members are routinely jailed for the political “crimes” of their relatives. Society is divided up and controlled by the “songbun” system of class structures, determined by political loyalty to the Kim regime. Any suspicion of insufficient loyalty to the ruling family can deny you access to employment, education, or health care. North Korea is the world’s ultimate Orwellian state.

Nevertheless, a recent report by Christian Solidarity Worldwide has found that, although the regime’s nature has not changed, the mindset of the North Korean people has shifted. The flow of information into the hermit kingdom — through radio broadcasts and the smuggling of DVDs and USBs containing South Korean soap operas — has created an awareness of the outside world. There is still no visible dissent, because to show dissent is to commit suicide, but within the privacy of people’s minds, discontent with the status quo is growing.

It is therefore essential, if the Singapore summit is to mean anything, that President Trump put human rights firmly on the table. He has no excuse not to, having met several North Korean escapees and invited one remarkable man, Ji Seon-ho, to the State of the Union address this year. As with the Helsinki process — which helped to open up the Soviet Union — human rights and international peace and security should be addressed together. For what peace can there be on the Korean peninsula if the terrible suffering of the North Korean people goes unchallenged?

It is worrisome that South Korea’s President Moon announced in advance of his meeting with Kim that human rights would be off the agenda. It is troubling that South Korea has not replaced the excellent Jung-hoon Lee as ambassador for human rights in North Korea, nor has it activated its foundation for North Korean human rights mandated by its own North Korea Human Rights Act. And there are warning signs that it is clamping down on the activities of Seoul-based human-rights groups focused on North Korea. Similarly, President Trump, 18 months into his administration, has not yet appointed a new special envoy for human rights in North Korea. Even more seriously, there is still no U.S. ambassador in Seoul. These gaps must be rectified urgently.

The Brandenburg Gate symbolized a country divided physically and ideologically. Panmunjom is similar: a stark dividing line between an open, democratic, economically liberal and prosperous South Korea and the world’s most totalitarian, repressive, and closed country to the North. President Reagan described the dreary Berlin Wall that stood behind him as “part of a vast system of barriers that divides.” The armed guards, fences and “a gash of barbed wire, concrete, dog runs and guard towers” that divided Berlin describe North Korea today.

As Trump shakes Kim’s hand, he would do well to bear in mind the words of Ronald Reagan: “There stands before the entire world one great and inescapable conclusion: Freedom leads to prosperity. Freedom replaces the ancient hatreds . . . freedom is the victor . . . freedom and security go together, that the advance of human liberty can only strengthen the cause of world peace.”

Freedom can be the victor again. But in the interest of peace and in the cause of humanity, President Trump must find the moral courage to help make it so.