This article was originally posted at Standpoint Magazine. 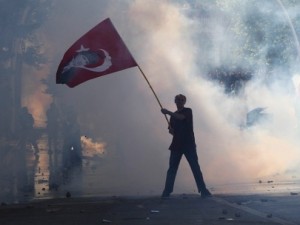 In 2013, peaceful protests in Istanbul’s Gezi Park were brutally put down by the Turkish government.

Sahin Alpay, a Marxist-turned-social democrat and longtime advocate of liberal democracy in Turkey, was profoundly anxious about the upcoming national elections when I met up with him at the upmarket Marmara Hotel in Taksim Square a few days before the June 7 vote. Though an early supporter of the Islamist-inspired Justice and Development Party (AKP), he became disillusioned with the increasingly autocratic rule of its leader, President Recep Tayyip Erdogan. “It’s a life or death election,” he warned. “We are faced with the greatest danger.”

The danger, at least for the moment, has been averted. An upstart left-wing pro-Kurdish party, winning parliamentary representation for the first time,  thwarted the ambitions of the AKP by helping to deprive it of a majority in the national assembly. Prime Minister Ahmet Davutoglu must either form a coalition government, try to govern without a majority, or submit to another general election.

While many commentators are stressing the political missteps of the AKP, it is important to reflect on the party’s met-eoric rise to power and the deep cleavages in Turkish society that made it possible. Hailed as a moderating force on political Islam, Turkey’s democratic experiment is by no means settled. In barely a decade, an openly Islamist party has challenged and transformed the nation’s secular political scheme — a fact left unchanged by the election results. Turkey could descend into religious militancy or civil strife, further weakening the cause of human rights and democratic ideals throughout the Muslim world.

Erdogan, a former mayor of Istanbul, established the “conservative democratic” party, the AKP, with the help of some friends in 2001. The next year, the party won a stunning two-thirds of the 550 seats in parliament, catapulting Erdogan into the role of prime minister. The AKP went on to win three consecutive parliamentary elections, by larger margins each time. In 2014, after two terms as prime minister, Erdogan was elected president with just over 51 per cent of the vote. The June election awarded the AKP 258 seats in the assembly, nearly double the Republican Peoples’ Party (CHP), the main opposition party and historic defender of Turkey’s secular system.

Media attention has focused on the surprise showing of the progressive Peoples’ Democratic Party (HDP) and its charismatic young leader, Selahattin Demirtas. Founded in 2012, the HDP has positioned itself as a champion of minority rights, chiefly that of the Kurds, but also of leftists, feminists and gays. Although the Kurdish minority makes up some 20 per cent of the population, it has lacked a political voice: the HDP could not previously overcome the 10 per cent threshold in national elections to place members in parliament. But this time the party won enough popular support — nearly 13 per cent — to gain 80 seats, making it a critical player in Turkish politics overnight.

Yet the AKP remains the most widely supported party in Turkey. The reason is that the secular paradigm of governance imposed upon modern Turkey by its founder, Mustafa Kemal Ataturk, has proven to be problematic for an overwhelmingly Muslim population. “Turkey’s twentieth-century experience with Kemalism — a Europe-oriented top-down Westernisation model — has largely come to an end,” writes Soner Cagaptay in The Rise of Turkey: The Twenty-First Century’s First Muslim Power (£16.71, Potomac Books). “Hard as it might be, secularist Turks need to understand and accept this fact.”

If so, much of the blame goes to the French model of secularism, or laicité, which Ataturk wrote into the Turkish constitution. Under his regime Islam was virtually purged from public life. “It’s based on the French Revolution, the thinking that religion represents backwardness and needs to be controlled and oppressed,” said Alpay. “It is an authoritarian kind of secularism.” In essence, Kemalism insisted that Turkey’s Muslim and Western identities were incompatible.

Enter Erdogan and the AKP, which swept to power offering a new vision, one that embraced Turkey’s Muslim identity. At first, the party promoted Islamic values while reaching out to Europe and courting membership of the European Union. Erdogan’s early political moves, aimed at reforming the authoritarian character of the Turkish state, were carried out in the name of “democratic” reform, not under the banner of Islam. With stable political leadership for more than a decade, Turkey has boasted historic economic growth, attracting record levels of foreign investment.

All of this led many Western leaders and observers to conclude that Turkey was on the path towards a liberal Islamic democracy, one that could influence the Arab Spring and reconcile the Muslim world to the West. President Barack Obama has praised Erdogan as one of five world leaders with whom he has the closest relationship. “For all his Islamist sympathies, Mr Erdogan is at root a pragmatist,” concluded the New York Times in 2011. “After working within Turkey’s democratic framework rather than outside it, he is recognised as perhaps the Middle East’s most influential figure.”

Few people still cling to such dreamy delusions. Ilter Turan, a political science professor at Istanbul’s Bilgi University, was blunt. “It is totally unrealistic to think that Erdogan could moderate the Arab Spring,” he told me as we sipped tea in his wine shop. He went on to warn that Turkey will not advance toward a fully liberal democracy with Erdogan in charge. “It is impossible as long as the president continues to wield enormous influence on the party.”

Even the editors at the New York Times have done an about-turn: they now compare Erdogan’s autocratic style to that of Vladimir Putin and complain about Turkey’s “battered democracy” under his rule.

Democracy has indeed taken a beating in recent years. In 2013 the government violently quashed demonstrations in Istanbul’s Gezi Park, where thousands had gathered peacefully to protest against the park’s demolition. Among the list of grievances against Erdogan and the AKP: a sustained crackdown on media critical of the government; prosecutions for “insulting” public officials; the sacking of hundreds of police and judges; and a new security policy that expands the use of police power and creates stiffer penalties for protesters. Even party officials such as Dengir Mir Mehmet Firat, one of the founders of the AKP, recently complained that Erdogan was “seeking to become a dictator.”

This fear became widespread among Erdogan’s critics when he announced his plan to transform Turkey’s parliamentary system into a presidential system, thus expanding and legitimising his presidential powers. That would have required the AKP to ram through parliament a constitutional amendment, which Erdogan fully intended to do had his party won the required 330-seat majority. “The election results mean that liberal democracy has taken root in Turkey,” Alpay, a columnist at Today’s Zaman, told me, “and that the people will not accept arbitrary and authoritarian rule.”

That may be so, but Erdogan and the AKP have altered the political culture in Turkey in ways that will not be easy to undo. Consider the new education agenda. The government has begun to convert secular state schools into imam-hatips, religious schools that dedicate up to 30 per cent of class time to Sunni Islamic study. Erdogan, who attended an imam-hatipschool as a child, told an assembly of AKP youth: “We want to raise pious generations.”

Piety or not, the government has vastly expanded the number of imam-hatip schools. In 2002, when the AKP took power, there were about 65,000 students in the religious schools. Today there are nearly a million. In addition, the state has made religion classes — promoting Sunni Islam — mandatory throughout state schools, involving about 17 million students. As recognised religious minorities, Christians and Jews can opt out. But Alevis, who follow a mystical branch of Islam and are the second-largest religious community in Turkey, are unrecognised and hence required to attend.“

It looks like religious indoctrination,” Isil Oral, an analyst at the Educational Reform Initiative, told me. As we spoke in her office at Sabanci Universtity, Oral worried that the new religious agenda will weaken a public school system already struggling with issues of quality and equity. In 2012, the government launched a controversial information and technology initiative in the schools known as the Fatih Project, evoking the Ottoman Sultan Mehmet II, the “Fatih,” or conqueror, of Constantinople. As Oral put it: “There is a trend in this country that being religious pays off.”

Erdogan has been the chief trendsetter. His speeches are infused with religious references, recalling Islam’s glorious past. At the AKP’s fourth party congress he evoked the Battle of Manzikert (1071), in which the Seljuk Turks dealt a decisive blow to the Byzantine Empire and went on to conquer most of Anatolia. At a March ceremony honouring army veterans, Erdogan delivered a fiery mix of Turkish nationalism, Islamism and paranoia. “Don’t even think that the struggle that began 1,400 years ago between truth and fallacy is over,” he said. “This long-standing struggle is going on and will go on.” Erdogan warns about “those who want to turn Turkey into another Andalusia” — a reference to the fall of the Muslim city of Granada to Catholic forces in 1492, ending nearly eight centuries of Muslim rule in the Iberian Peninsula.

In all this Erdogan seems to fancy himself as a new caliph in a rejuvenated Turkish Ottoman empire. “The Ottoman caliph was the standard bearer and he wants to restore Turkey to that historic mission,” Mustafa Akyol, an author and columnist at the Hurriyet Daily News, told me over lunch. “That’s why Erdogan needs these conspiracy theories.”

Erdogan’s opponents are in two minds about his ultimate motivation. For some, he and the AKP have become intoxicated with power and exploit Islam in the pursuit of it. “It has nothing to do with Islam,” Alpay said. “It is sheer corruption that is driving the AKP machine.” Corruption charges were levelled against top-ranking government officials in December 2013, and have left a cloud of suspicion.

For others, Erdogan’s early reformist talk was a mere façade for his hardcore Islamism. “He wants Islam to be the main determinant in society,” said Hursit Gunes, a former deputy chairman of the CHP. “That has always been the agenda.” The state has doubled the budget of the Religious Affairs Directorate (known as the Diyanet) and added tens of thousands of new employees attached to Sunni mosques around the country.

Of course, both theories may be correct. The lust for power corrupts religion, just as the quest for piety is vulnerable to hubris. As Cengiz Erdogan, a CHP member who runs a car repair workshop, put it to me: “He’s power-hungry and he’s dedicated to the Islamist way.” Or, as C.S. Lewis once warned: “Of all bad men, religious bad men are the worst.”

​That may be reason enough to cheer Turkey’s election results: they offer the hope that corrupted religion will find it harder to derail the nation’s experiment in democratic self-government. More than hope, of course, will be needed. For if secular authoritarianism has left the stage in Turkey, its religious counterpart is waiting hungrily in the wings.

Joseph Loconte is an associate professor of history at the King’s College in New York City and the author of A Hobbit, a Wardrobe, and a Great War: How J.R.R. Tolkien and C.S. Lewis Rediscovered Faith, Friendship, and Heroism in the Cataclysm of 1914-1918 (forthcoming).