Joseph Loconte » Commentary, Featured » Law and Liberty: The Rule of Law vs. the Militias

Law and Liberty: The Rule of Law vs. the Militias

This article was originally posted at Law and Liberty. 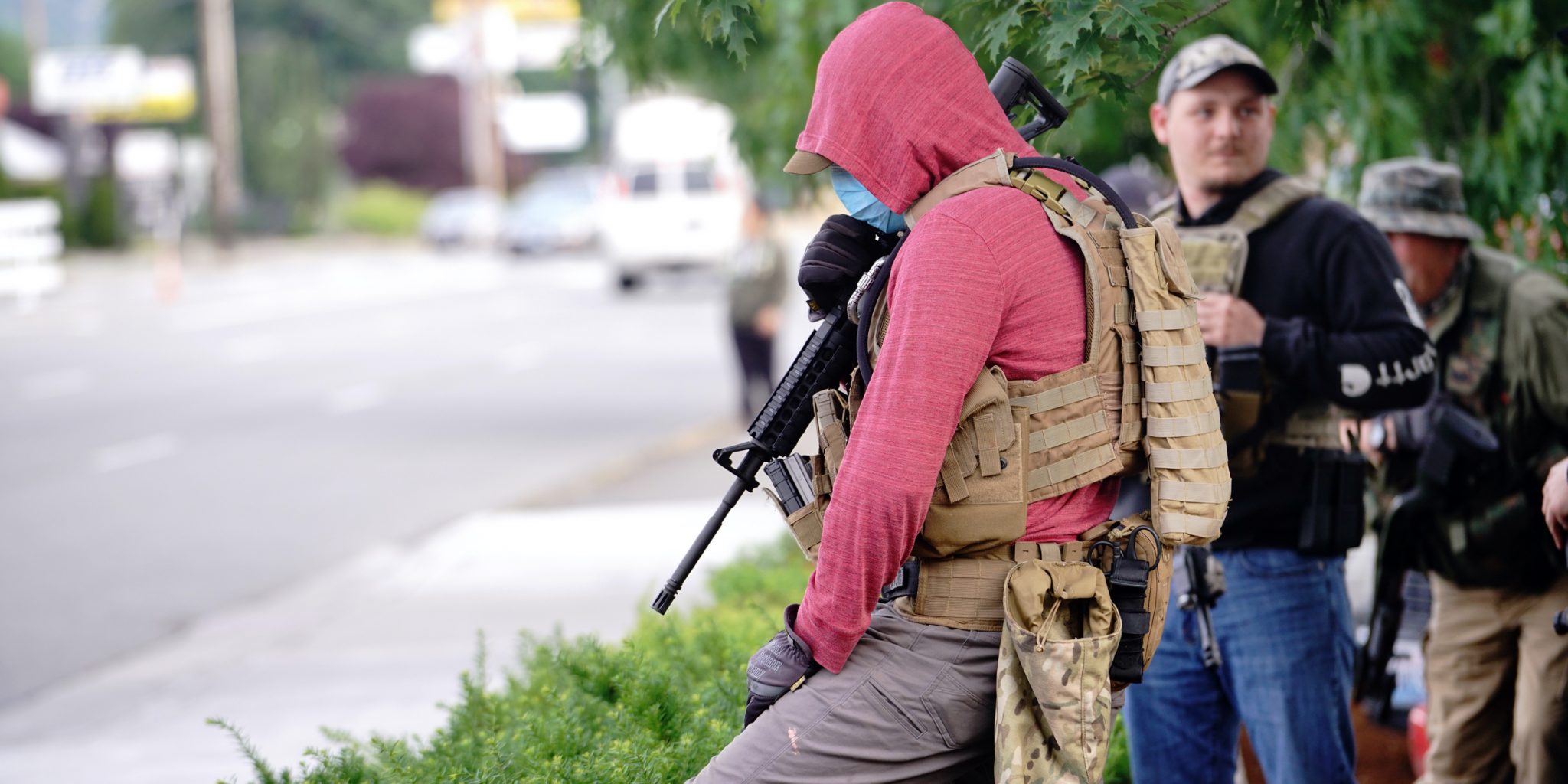 In no presidential election since 1860 has the fear of post-election violence been so palpable. Indeed, the politically inspired violence ravaging many of our cities over the last several months marks the beginning of a new and dangerous chapter in American history: the potential unravelling of the rule of law.

The plot to kidnap Michigan Gov. Gretchen Whitmer is among the more outrageous episodes. In cities such as Philadelphia, Minneapolis, Seattle, Portland, Kenosha, Louisville, and Washington, D.C, the threat or recourse to force has been the order of the day.

This situation is untenable. In a healthy democratic system, citizens must make up their minds on public matters and elections free from intimidation and coercion. Such is no longer the case in America, where representative democracy is now in trouble.

Descriptions of the turn to the use of force in democratic systems—which is nothing new, sadly—range from the outbreak of a “mobocratic spirit” to the advent of “militia politics.” In one of his earliest public speeches, Abraham Lincoln, reacting to the sudden rise of violence in Missouri and parts of the South, addressed the Young Men’s Lyceum in Springfield, Illinois. He spoke of people gathering “to burn churches, ravage and rob provision-stores, throw printing presses into rivers…and hang and burn obnoxious persons at pleasure, and with impunity.”

The spread of mob action in the 1830s, redolent of what is occurring today, was a spontaneous spasm born of anger, boredom, and the opportunity to loot and pilfer. The ensuing chaos, Lincoln went on, might feed on itself, gather momentum, and spiral out of control, until the public’s attachment to the political order disintegrated. The result, he warned, is that “government cannot last.”

“Militia politics” calls to mind a more deliberate kind of activity, in which groups form with a clearer chain of command and a more fixed set of tactics. Historical accounts of the role of militias in the collapse of political regimes sometimes assign more structure for these groups than they actually possessed in their initial moments, when things were in flux between mobs and full organizations.

Two infamous instances in Europe in the aftermath of the first World War illustrate the rise of militia politics.

In Italy, the constitutional monarchy was widely unloved. Beginning in 1919, disgruntled former soldiers gathered into different groups, with those from the Right engaging in street violence against socialists and groups from the Left. All over Italy, strikes and riots against the cost of living broke out. Mobs attacked banks and public buildings. Eventually the Right came together under Benito Mussolini, a disillusioned socialist. These Fascist “black shirts” went on to stage a massive march on Rome in 1922, which led to Il Duce’s taking full control of the government in 1925. Mussolini later boasted that his revolution had “curtailed useless or harmful liberties while preserving those which are essential.”

In Russia, Vladimir Lenin had no power base before the Marxist revolution in October 1917. Even after the toppling of the Tsarist regime, in the waning hours of the Republic, there was no mass support for a “revolution of the proletariat.” But Lenin understood how to use terror to mobilize disaffected peasants, factory workers, ex-soldiers, and other groups. “We’ll ask the man, where do you stand on the question of the revolution? Are you for it or against it? If he’s against it, we’ll stand him up against a wall.” He wasted no time in establishing his own security force, the Cheka, to engage in “counter-revolution and sabotage.” A vicious civil war raged until 1923, when Lenin’s Red Army emerged triumphant.

After more than 230 years of living with success under the same constitution, few Americans have any inclination for authoritarian government, coming from either the Right or the Left. But in today’s climate with mayors and governors acquiescing to or siding with the mobs and militias, and with so many citizens abandoning the cities for safer havens in the suburbs or in more orderly states, it is none too soon to begin to worry.

Corporate America, sports moguls, advertisers — they all seem to be focusing on their own immediate well-being while ignoring the social disintegration occurring outside of their gated communities. In an upper-class version of fiddling while America burns, they are ceding to extortion while hoping that a change of national leadership will buy them a return to normalcy.

Mainstream media sources have likewise adopted an approach of promoting the interests of their favored political party. Instead of reporting on the disorder that has been occurring in cities like Portland and Seattle, they have chosen to deliberately censor reality.

Incredibly, the greatest loss in property in civil disturbances in the last century, the large-scale destruction of local businesses, and the injuries and deaths of citizens have been swept under the rug. Only in those instances where it is thought that a killing is the work of a right-wing activist, or where it is alleged that federal action initiated by President Trump has precipitated the disorder, or where a white nationalist group is charged with a plot against the governor, are the events given serious attention.

For the most part, however, it is no secret that the greater part of the recent violence in the cities has originated from mobs linked to Leftist militias affiliated in some fashion with Antifa activists and Black Lives Matter. It is perhaps to be expected in an election year that liberal political leaders would not acknowledge this fact, but place the emphasis, in Michelle Obama’s words, on the “overwhelmingly peaceful movement for racial solidarity.” This observation may be soothing, but it does not obviate the amount of real violence that has taken place.

Nor does it deny that the groups bent on creating disorder have often blended themselves into the larger demonstrations, and used them to supply cover and—let’s be honest—to receive, up to a point at least, a measure of political support.

In the presidential debate in Cleveland, Joe Biden continued the same general strategy by insisting that Antifa—a self-proclaimed anti-fascist movement that employs tactics that most Americans understand to be fascist—should be considered an “idea,” not an “organization.” This contention was intended to diminish fears of any real danger from this group. Attorney General William Barr has taken a contrary view: “I’ve talked to every police chief in every city where there has been major violence, and they all have identified Antifa as the ramrod for the violence.”

Rule of Law or Rule of Mob?

The main objective in the study of mobs and militias is not, however, to decide which political disposition is most responsible for instigating violence. From what analysts in this field have surmised, the principal actors in America over the years have moved from side to side, as the actions of right-wing groups in Charlottesville in 2017 might indicate. The most important lesson to consider transcends partisanship. The U.S. Constitution authorized the establishment of the national guard and state defense forces, dedicated to upholding the rule of law. The actions of these militia groups, by contrast, represent law’s negation.

Indeed, an increase in militia activity, whether coming from the Left or the Right, together with the growing belief that such activity is inevitable, saps public confidence in government and in its ability to quell disorder. Unless it is resolutely countered by legitimate political authority, it opens the door to the disintegration of public order, as events in Europe in the 1920s showed.

The highly publicized incident in Portland at the end of August that preoccupied partisans on both sides—in which U.S. Marshals gunned down a fugitive who allegedly murdered a Trump supporter during a protest—was in the larger scheme of things a distraction. It missed what was most important for defending the government.

The more that the militias on the Right and Left are involved in open struggles with each other, the better the chances that one of them, and not the legitimate government, will win out. Militia group activity from one side tends to boost militia group activity on the other.

Nothing better illustrates the loss of legitimate government authority than what has been on open display in Portland and Seattle. The feckless politicians in both cities, with the assistance of their governors, pulled back from using the power of government to defend law and order, sold out their police departments, and caused the “retirement” of their police chiefs. They preferred to garner political support from those who favored the militia forces of the Left.

From the point of view of the militias, it has become clear that maintaining their own following is best served by continuing the struggle and the use or threats of use of violence. They gained local influence by showing that they were in charge of many of the streets and that they exercised as much or more control over parts of the city as the police. They could compel local officials to de-fund the police and “re-imagine” the local system of prosecuting what were once counted as crimes. They intimidated and in instances humiliated the politicians, showing the influence they had with large parts of the local populace.

In short, beneath the surface, the militias, not the government, were running the show.

The activities of militias on the Left are often linked to forces on the Left in the universities and to those in intellectual circles exercising the sanction of the so-called cancel culture. No doubt in many instances this connection is direct, as some of those active in the immediate political arena are themselves former or current students. The canceling of speeches and events on university campuses by “enemy” intellectuals, sometimes by the threat or use of coercion, has also involved participation by those connected to militias.

And yet, as important as it is for those who oppose these actions on campuses to resist them, it would be a mistake to think that by defending a speaker or protecting the right of a university event to be held, the battle against leftist militias is materially affected.

Tragically, we have moved beyond symbolic conflicts on campus to real struggles in the streets. New forces have been set loose, not unlike those that were unleashed in Italy and Russia a century ago. What will be the results of this presidential election? Will we reap the whirlwind from the growing contempt for the rule of law? We should ponder carefully Lincoln’s Lyceum address, delivered during another season of violence and lawlessness: “Let every man remember that to violate the law is to trample on the blood of his father, and to tear the charter of his own and his children’s liberty.”