Providence: 1919: Wilson, the Covenant, and the Improbable League

This article was originally posted at Providence. 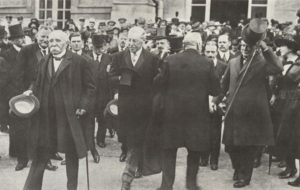 VERSAILLES, France—From a window in the Hall of Mirrors at the Versailles Palace, the view of its famed gardens and fountains is a welcome reward for negotiating the crush of tourists throughout the palace chambers. Here is a haven of natural and man-made beauty, serenity, and order. Yet a hundred years ago the view from this room would have been much different.

Beginning early in the day on June 28, 1919, onlookers gathered outside the palace, waiting for the outcome of diplomatic negotiations that had dragged on for months. The scene was a swirling mix of emotions: anxiety, grief, bitterness, resignation, and hope. Collectively, they had endured the industrialized slaughter of their youth, the near collapse of their economies, the shattering of their political institutions. The diplomats, who had assembled in the Hall of Mirrors at 3:00 pm, emerged less than an hour later to announce that the Treaty of Versailles—the agreement officially ending the First World War—had been signed. The crowd showered the delegates with flowers and erupted into cheers and shouts of relief.

The man of the moment was US President Woodrow Wilson. More than any other statesman, Wilson imposed his will upon the Versailles Treaty: a breathtaking attempt to redesign the entire international order based on democratic ideals.

Wilson’s brainchild and crowning achievement, the League of Nations, offered a new vision for international relations: a peace-loving “community of power” to replace the “balance of power” that had dominated European politics for centuries. It would be based on “the principle of justice to all peoples and nationalities, and their right to live on equal terms of liberty and safety with one another, whether they be strong or weak.” This was the central democratic truth that the League was meant to embody. “We have accepted that truth,” Wilson said, “and we are going to be led by it, and it is going to lead us, and through us the world, out into pastures of quietness and peace such as the world never dreamed of before.”

Diplomatic historians invoke the phrase “Wilsonian idealism” to describe the American president’s outlook as he tried to reimagine the new world order. Yet many fail to grasp how Wilson’s humanistic and religious assumptions turned his democratic project into a fool’s errand.

Up until the First World War, European diplomacy was based on practical and materialistic factors, such as economic competition, access to markets, and military strength. It was rooted in realpolitik: in the observable fact that nations were engaged in the acquisition and maintenance of power, and that they made alliances and went to war to defend their national interests. After the defeat of Napoleonic France, the equilibrium in Europe was maintained by a balance of power, a network of alliances that sought to prevent any single state or combination of states from dominating the continent.

Wilson was determined to tear away and rebuild the entire foundation for international politics. He seemed to have recent history on his side. The political machinations of the European powers had failed to prevent the catastrophe of 1914–18, the costliest and most devastating conflict ever fought. No rational individual, Wilson reasoned, would want to undergo another global war—nor would any rational nation. “There is only one power to put behind the liberation of mankind, and that is the power of mankind,” Wilson said in a 1919 speech defending the League. “It is the power of the united moral forces of the world, and in the Covenant of the League of Nations the moral forces of the world are mobilized.”

It is a remarkable proposal, underscored by Wilson’s insistence on the use of the phrase “covenant,” an effort to endow the League with a sacred aura. (Wilson was a lifelong Presbyterian, though his commitment to historical Christianity is debated by his biographers.) Under the terms of the treaty, an act of aggression anywhere in the world created a moral and political obligation upon all other League members: a willingness to mobilize their economic and military resources to confront the aggressor state, whether or not their national interests were threatened. Unlike any other international arrangement in human history, Wilson’s League would be an alliance based not on national interests, but rather on the principle of peace and the defense of democratic ideals.

Although the US Senate failed to ratify the treaty, 63 other nations adopted it. Gilbert Murray, a British classical scholar who served on an advisory committee to the League, suggested that Wilson’s view was embraced by a growing number of politicians and ordinary citizens throughout the 1920s and ’30s. “The whole enterprise of the League is a great adventure, and an adventure based upon a great Repentance,” writes Murray in The Ordeal of This Generation (1928). “The abolition of war among the civilized nations is not yet assured, but it is within human power. It is almost within reach.”

The concept of national “repentance” has a long historical pedigree, of course, but it is fraught with intellectual confusion. Nation-states, after all, are not like individuals; they do not possess an immortal soul, with an individual conscience, to which they are held accountable to God. Yet Wilson seemed to believe that what applies to individuals applies to nations. He apparently believed in the essentially rational and pacific nature of man:

The most dangerous thing for a bad cause is to expose it to the opinion of the world. The most certain way that you can prove that a man is mistaken is by letting all his neighbors know what he thinks, by letting all his neighbors discuss what he thinks, and if he is in the wrong you will notice that he will stay at home, he will not walk on the street. He will be afraid of the eyes of his neighbors. He will be afraid of their judgment of his character. He will know that his cause is lost unless he can sustain it by the arguments of right and of justice. The same law that applies to individuals applies to nations.

It follows that members of the League will dissuade other members from taking aggressive action against their neighbors; their collective moral judgment, expressed through an international tribunal and other institutions, will deter international conflict.

Yet Wilson’s first premise—the belief that an individual ready to commit an act of aggression will be thwarted by the threat of public shame—is verifiably untrue. It might describe some members of the faculty at Princeton University, where Wilson served as president before entering politics. It does not describe human societies as we have known them since the dawn of civilization. And what is not true of the individual inclined toward evil could not possibly be true of nation-states, with their potential for collective evil magnified by the tools of modern science and technology.

Nevertheless, historian Margaret MacMillan writes that “Wilson kept alive the hope that human society, despite the evidence, was getting better, that nations would one day live in harmony.” Henry Kissinger, the quintessential realist during the Cold War, saw in this a deficient understanding of human nature. “European leaders had no categories of thought to encompass such views,” he writes. “Neither their domestic institutions nor their international order had been based on political theories postulating man’s essential goodness.”

Wilson’s League could not reckon with the ways in which the Great War had damaged the moral and spiritual outlook of European society. As Winston Churchill described it, “The fire roared on till it burned itself out.” Nations that had been so devastated by the mechanized horror of the war could not easily quell the resentments and grievances of their populations. Thus, the tragedy of Versailles is twofold. First, there was the belief that governments would be prepared to transform their foreign policies into expressions of the Sermon on the Mount. Second, there was the notion that a “community of power” would be capable of acting collectively to face down the inevitable threats to international peace and security.

“Truly, this was a peace which had the tragedies of the future written into it as by the devil’s own hand,” writes George Kennan, US ambassador to the Soviet Union. “This was the sort of peace you got when you allowed war hysteria and impractical idealism to lie down together in your mind, like the lion and the lamb; when you indulged yourself in the colossal conceit of thinking that you could suddenly make international life over into what you believed to be your own image.”

Under this humanistic vision, no treaty, no covenant, no league of nations could effectively confront the Will to Power. By 1919, when the Treaty of Versailles was signed, the forces of totalitarianism were already on the move: Italy’s Benito Mussolini founded the first fascist party in Europe; the German Workers’ Party, the precursor to the Nazis, was launched in Munich; and representatives from two dozen countries met in Moscow at the Founding Congress of the Communist International.

Perhaps an insight from the character of Elrond in J.R.R. Tolkien’s The Lord of the Rings, about the nature of our mortal lives, offers a measure of Christian realism in the face of Versailles: “And the Elves believed that evil was ended forever, and it was not so.”

Previous: National Review: Mussolini and the E...
Next: Wall Street Journal: The Versailles ...

One Response to Providence: 1919: Wilson, the Covenant, and the Improbable League