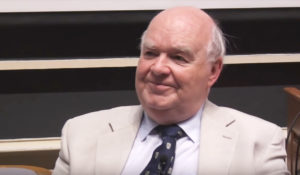 Oxford, England — John Lennox, emeritus professor of mathematics at the University of Oxford, leans forward in his chair, his blue eyes brightening, as he explains how his peculiar profession nearly shipwrecked the academic career of one of his intellectual heroes, Christian author and apologist C. S. Lewis.

Shortly before he disembarked for France to fight in the British Army during the First World War, Lewis failed his “fearsome” qualifying examination in algebra to continue his studies at Oxford. “He had to go to a crammer, which is an ancient word for a school where they crammed the information into you,” Lennox tells me. “But the world war intervened.” When Lewis returned to Oxford in January 1919, the university waived the mathematics requirement for him and other war veterans. “So, we were in a hair’s breadth of never having Lewis’s literary genius and output because of algebra — the subject I love,” he laughs. “There is something ironic in that.”

Perhaps something providential as well. By the time Lennox arrived at Cambridge University as an undergraduate in 1962, he already had devoured many of Lewis’s writings. He couldn’t resist sneaking out of his math lectures to hear Lewis lecture on John Donne before a packed auditorium.

More than any other thinker, it was Lewis — an atheist who converted to Christianity with the help of J. R. R. Tolkien — who gave Lennox the conceptual tools to confront the materialist objections to faith in God. “I thought it was very important to try to walk inside the shoes of someone who knew atheism from the inside, and Lewis provided that guide to me,” he says. “In all his questioning, there was the slow development of his impression that there was a God who could be taken seriously. All of that became very important to me.”

Now, at 75, Lennox has distinguished himself internationally for his intellectual defense of Christianity. He has debated — and, according to his admirers, bested — celebrated atheists such as Christopher Hitchens, Richard Dawkins, and Peter Singer. A fellow in the philosophy of science at Oxford, he writes books that explore the essential compatibility between the scientific quest, rightly understood, and religious belief. Newton, Copernicus, Kepler, Galileo: All believed in a God who created and sustained the universe. “Instead of the founders of modern science being hindered by their belief in God,” Lennox reminds me, “their belief in God was the motor that drove their science.”

Citing Lewis’s approach in works such as The Abolition of Man, Lennox assails the notion that science is the only pathway to truth, or that it can explain the mystery of the human condition. In his sights are thinkers such as Peter Atkins, a professor of chemistry at Oxford who claims that “there is no reason to suppose that science cannot deal with every aspect of existence.”

Lennox discerns in this a self-defeating materialism. In books such as God’s Undertaker: Has Science Buried God? he argues that the scientist’s confidence in reason ultimately depends on the existence of a rational and purposeful Creator. Otherwise, our thoughts are nothing more than electro-chemical events, the chattering of soul-less synapses. “If you take the atheistic, naturalistic, materialistic view, you’re going to invalidate the reasoning process,” he says, “because in the end you’re going to say that the brain is simply the end product of a blind, unguided process. If that’s the case, why should you trust it?”

The materialist view inevitably gives birth to a form of determinism that appears to mock our essential humanity. Richard Dawkins, evolutionary biologist and atheist, expresses the modern scientific outlook thus: “The universe we observe has precisely the properties we should expect if there is, at the bottom, no design, no purpose, no evil and no good. Nothing but blind, pitiless indifference. DNA neither knows nor cares. DNA just is. And we dance to its tune.” Yet biological determinism, Lennox explains, robs human beings of any claim to dignity and freedom. Free will, we are told, is an illusion.

“Free will,” he writes, “is that gift of God that gives us the capacity to come to God with empty hands.” By insisting that every decision and action in the world has been brought about by divine fiat, religious determinists make God the author of unspeakable evil. “It is hard to imagine that anyone could believe that such extreme deterministic ideas are even remotely Christian,” he writes. “They seem infinitely far away from describing the God of love revealed to us in Jesus Christ.”

In all of this Lennox follows in the footsteps of his theological mentor, C. S. Lewis. From his post at Oxford, he continues to communicate — in clear, compelling, and persuasive prose — the essential truths of the Christian faith to a wide and diverse audience. With a mathematician’s passion for logic, he embraces one of Lewis’s most famous maxims: “I believe in Christianity as I believe that the sun has risen: not only because I see it, but because by it I see everything else.” Before our conversation ends, I am reminded of another link between them: Like Lewis, Lennox was born in Northern Ireland and made England his permanent home, while retaining his Ulster charm.

“C. S. Lewis was a brilliant intellectual. But he was an Irishman, you know,” he says with a smile. “There’s a warmth there, a visceral nature . . . he had a deep interest in understanding where people were coming from, and to relate his Christian faith to helping them.”