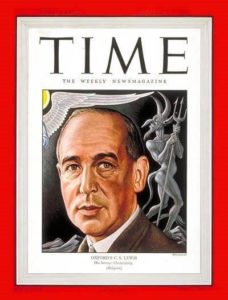 ‘The lecturer, a short, thickset man with a ruddy face and a big voice, was coming to the end of his talk.” That was the opening sentence of the Time magazine cover story for September 8, 1947. The subject of the story, who swiftly exited the classroom for the nearest pub, was the Oxford University don and best-selling author Clive Staples Lewis. How did a scholar of medieval literature, with no formal theological training — a strident atheist in his youth — become, in the words of Time, “one of the most influential spokesmen for Christianity in the English-speaking world”?

This is one of the questions taken up by James Como in C. S. Lewis: A Very Short Introduction, a recent title in the Oxford University Press series of compact introductions to wide-ranging topics. Como’s unlikely achievement is to deliver a brief (under 200 pages) yet compelling literary survey of Lewis’s works, which include over 40 books, 200 essays, 150 poems, short stories, a diary, and three volumes of letters. I can think of only a handful of authors qualified to take on such a project, and Como is among them. A professor emeritus of rhetoric at York College (CUNY), a founding member of the New York C. S. Lewis Society, and the author of Branches to Heaven: The Geniuses of C. S. Lewis (1998), he is a leading Lewis scholar.

Nevertheless, the task is daunting. Lewis’s writings — his fantasy, science fiction, apologetics, and theological essays — were as diverse as his public personae. He excelled in his roles as a university lecturer, literary historian, broadcaster, debater, preacher, and public intellectual. His series of children’s books, The Chronicles of Narnia, has sold over 100 million copies in over 40 languages. Though he was a lifelong Protestant (Anglican), his works could be found at the bedside of Pope John Paul II. Como puts it nicely: “Withal it is easy to lose sight of just how complex, productive, influential, charismatic, and steadfast this portly, rumpled man was.”

Indeed, Lewis was a force of nature — and, we are entitled to suspect, of something beyond nature. As Como notes, Lewis’s first published writing was a collection of poetry, Spirits in Bondage (1919), a work he began when he was serving with the British Army in France during the Great War and which bears the imprint of the soldier turned cynic:

Come let us curse our Master ere we die,
For all our hopes in endless ruin lie.
The good is dead. Let us curse God most High . . .

We built us joyful cities, strong and fair,
Knowledge we sought and gathered wisdom rare,
And all this time you laughed upon our care . . .

Lewis’s diary, All My Road Before Me (1922–27), offers clues about what lured him away from his egoism and materialism. The last line of the diary reads, “Is there never to be any peace or comfort?” He would find both in the teachings of the Bible. But only with the help of many Christian authors and friends — including George MacDonald, G. K. Chesterton, Owen Barfield, and J. R. R. Tolkien — did Lewis overcome his fierce doubts and embrace the Christian faith. Explains Como: “The great value of his diary is this: it shows us the man Lewis converted from, and the reader is relieved to be done with it.”

What offended and confounded many of Lewis’s peers at Oxford was his supernaturalism: an unapologetic belief in the traditional Christian doctrines of heaven and hell and in Jesus as the incarnate Son of God. The concepts are embedded in his science-fiction mythology, The Space Trilogy. The series begins with Out of the Silent Planet (1938), which traces the adventures of Dr. Elwin Ransom, a Cambridge philologist who battles the forces of evil that have turned earth into a quarantined and “silent” planet in the cosmos.

As Como reminds us, the sin of pride, and its fatal consequences, lie near the center of the story. Ransom travels to Melacandra (Mars), a planet with a benevolent guardian spirit, the Oyarsa, who presides over creatures untouched by sin. To the inhabitants Ransom tries to explain earth’s history of hatred, war, slavery, and oppression.

“It is because they have no Oyarsa,” said one of the pupils.

“It is because every one of them wants to be a little Oyarsa himself,” said Augray.

Ransom’s adventures continue in Perelandra (1943) and That Hideous Strength (1945), in which the malignant powers of perverted science endanger the entire human race. “Finally we understand what is at stake,” Como writes. “Earth may be one small part of a larger design, yet the reader sees with fresh eyes the enormity of the Fall and the magnitude of the forces that range both against us and for us.”

Walter Hooper, Lewis’s personal secretary and renowned editor of his works — to whom Como dedicates his book — observes that many of Lewis’s best books were conceived under the shadow of the Second World War. He began writing The Problem of Pain (1940) in the summer of 1939, on the eve of Hitler’s invasion of Poland. In the same year, within weeks after the first air-raid sirens were sounded in London, Lewis wrote a fragment of what would become The Chronicles of Narnia, probably his best-known work. The first book in the series, The Lion, the Witch, and the Wardrobe (1950), tells the story of the Pevensie children, who travel through a magic wardrobe into Narnia, the kingdom ruled by Aslan, the Great Lion: “This story is about something that happened to them when they were sent away from London during the war because of the air-raids.”

Likewise, it was during a church service on Sunday, July 21, 1940—at the start of the Battle of Britain — that Lewis got the idea for The Screwtape Letters (1942), the fictional correspondence between a senior devil, Screwtape, and his apprentice, Wormwood. His most significant apologetic work, Mere Christianity (1952), was based on a series of radio talks he delivered over the BBC, beginning in 1941, when the survival of Western civilization was an open question. Like no one else, Lewis could transform dry religious dogma into something plausible and appealing. Not only has Mere Christianity been bought, translated, and quoted more than any of his other works but, Como says, it “has catalyzed many conversions.”

Comprehensive, lucid, rich in moral insight, C. S. Lewis pays homage to Lewis’s talent for uniting Christian teaching with the deepest yearnings of the human heart. In his autobiography, Surprised by Joy (1955), Lewis describes what he calls “the dialectic of desire,” when we experience a sudden stab of joy and longing, which quickly vanishes and sends us on a search for its source. “Joy itself, considered simply as an event in my own mind, turned out to be of no value at all,” he wrote. “All the value lay in that of which Joy was the desiring.”

Lewis concluded that this experience, which he mediated through books, or music, or nature, could not be a cruel fiction. Thus we read in Till We Have Faces (1956), a retelling of the myth of Cupid and Psyche: “The sweetest thing in all my life has been the longing — to reach the Mountain, to find the place where all the beauty came from. . . . Do you think it all meant nothing, all the longing? The longing for home?” Como writes that Lewis “lost interest in Joy itself after his conversion.” Perhaps it is better to say that Lewis redirected his attention: from his own experience to that of his fellow travelers.

Joy was the subject of probably his most famous sermon, “The Weight of Glory.” Preached on June 8, 1941, in the Church of Saint Mary the Virgin in Oxford, it must rank as one of the most profound and poignant messages about divine love ever delivered from any modern pulpit:

At present we are on the outside of the world, the wrong side of the door. We discern the freshness and purity of the morning, but they do not make us fresh and pure. We cannot mingle with the splendors we see. But all the leaves of the New Testament are rustling with the rumor that it will not always be so. Some day, God willing, we shall get in.

If Lewis’s vision of God’s glory is correct, then perhaps no other author over the last century has done more to help others to taste the divine happiness, to find their way home, to reach Aslan’s country. “A cleft has opened in the pitiless walls of the world, and we are invited to follow our great Captain inside,” Lewis wrote. “The following Him is, of course, the essential point.”