National Review: Mussolini and the End of Liberal Democracy 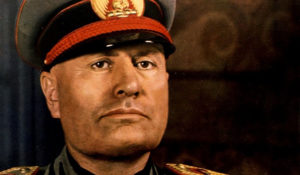 One popular myth about European fascism is that its roots were planted in the rancid soil of Versailles — the Treaty of Versailles, that is, signed a century ago, on June 28, 1919, which officially ended the First World War. The punitive terms of the agreement, we are told, enraged and demoralized a defeated Germany, making the rise of Hitler and Fascism inevitable. In fact, the origins of Fascism can be traced here in Milan, in the Piazza San Sepolcro. It was here, three months before Versailles, that Benito Mussolini, a former soldier who had fought on the winning side of the war, launched the Fascist movement.

It was a ragbag of a gathering. On Sunday morning, March 23, Mussolini addressed a group of perhaps 120 men and several women: dispirited socialists, ex-soldiers, futurists, anarchists, and other unclassifiable revolutionaries. What united them, among other things, was a belief that Italy’s horrific sacrifice for the Allied cause in the Great War — over 650,000 killed and 950,000 wounded — demanded national regeneration. She must not be denied the spoils of war: no vittoria mutilata, or mutilated victory. Barely three years later, 25,000 black-shirted followers marched on Rome, sweeping Mussolini into the government. “Liberalism denied the State in the name of the individual,” he proclaimed. “Fascism reasserts the rights of the State as expressing the real essence of the individual.”

The Italian journey from constitutional monarchy to Fascist dictatorship is a cautionary tale for both liberals and conservatives. Although he is viewed as a creature of the political right, Mussolini often enlisted the ideals and tactics of the political left. His success — he ruled for 20 years — is not only a warning about the fever of nationalism. It is a reminder that leftist promises to create perfectly egalitarian societies can reap a whirlwind of violence and disillusionment.

Mussolini began preaching revolutionary change in February 1918, after returning from the front and resuming his job editing Il Popolo d’Italia. Although he had abandoned his socialism a few years earlier, he understood its appeal: “It is a question of organizing the state to ensure the greatest individual and social well-being.” Italy’s parliamentary government, he suggested, should be dominated by “a man who is ruthless and energetic enough to make a clean sweep.”

Bombastic, charismatic, visionary: Mussolini presented himself as that man, ready to seize the historical moment. He organized his followers into a fascio di combattimento, a fighting group, who took the Roman fasces, the term for a bundle of sticks bound with ropes, as their symbol of unity. “We demand the right and proclaim the duty to transform Italian life,” he said at the Milan meeting, “if it proves inevitable using revolutionary means.”

Italy’s post-war economic situation, though not as severe as the one in Germany, was ripe for exploitation. There were painful divisions over Italy’s participation in the war. Parliament — denounced by Mussolini as “invincibly nauseous” — was widely discredited. The monarchy was unloved. Writes historian R. J. B. Bosworth in Mussolini’s Italy: “For Italy, least of the great powers, poorest of the great economies, most fragile of the great societies . . . the conversion from war to peace entailed a sea of troubles.”

The war appeared to ravage the assumptions of the old order. All over Eastern Europe, political legitimacy was in doubt and national borders were being contested. Meanwhile, the violence and disorder created by the advance of international Communism was causing a panic. The Bolsheviks had plunged Russia into a vicious civil war, and although Italian socialism proffered a more humane face, to many Italians it led to the same future: class warfare, the erosion of property rights, mob violence, and contempt for national and cultural identity.

Italy’s economic woes accentuated the socialist appeal. Inflation was rising faster than it had during the war. Hundreds of thousands of soldiers returning from combat — including 220,000 who were disabled — struggled to find work. On a personal note: My Italian grandfather, Michael Loconte, was living and working in the United States when war broke out. He opted to fight with the American military in France, was naturalized as a U.S. citizen after the war, and settled with his family in New York City. His instincts were good: In the summer of 1919, of the 1.5 million Italian soldiers still serving in the army, roughly a quarter were deployed within Italy to guarantee public order. There was a palpable fear of a socialist revolution.

Those fears were magnified in the general election of November 16, 1919. Mussolini and his Fascist allies were on the ballot, but they suffered humiliating losses. Meanwhile, the socialists won roughly 1.8 million votes and claimed 156 seats in the Chamber of Deputies, making them the largest political party. The left-wing paper, Avanti!, declared Mussolini a political corpse; his coffin was paraded through the streets of Milan, along with dirge-singing demonstrators.

The funeral celebrations were premature. Efforts to reconvert the war economy were flailing; strikes and riots over the cost of living accelerated. All over Italy, trains, banks, and public buildings were attacked by mobs. Local “Soviets” were announced, and some areas of the country fell under complete Communist control. But neither the Socialist party nor the Italian Popular party (composed of Catholic socialists) offered any effective polices. Fascism found nourishment in socialism’s weakness. Writes Christopher Hibbert in Mussolini: The Rise and Fall of Il Duce: “The Fascists put themselves forward as saviors of the country, the only force by which Bolshevism could be checked and strangled.”

There was a good deal of strangling to be done. Squads of Fascists, the squadristi, armed with knives, rifles, and revolvers, assaulted Communists and their sympathizers. With government complicity, roughly 3.000 anti-Fascists were murdered between October 1920 and the March on Rome in October 1922. Mussolini did not have to seize power; he was offered it by King Victor Emmanuel III. Immediately after forming a coalition government, he demanded from the Chamber of Deputies unrestricted authority to implement his reforms. He was granted these powers by a majority of 275 votes to 90.

It would not be long before Mussolini articulated his view of the state, which would captivate Adolf Hitler:

The Fascist conception of the State is all embracing; outside of it no human or spiritual values can exist, much less have value. Thus understood, Fascism is totalitarian, and the Fascist State — a synthesis and a unit inclusive of all values — interprets, develops, and potentiates the whole life of a people.

Thus, it was Mussolini, not Hitler, who introduced the Fascist disease into the bloodstream of Europe. And he succeeded not because Italian diplomats failed to deliver the goods at Versailles. Whatever his motives in his campaign to rebuild a battered nation, Mussolini understood something of the human longing for purpose and community. Perhaps our current political culture is not so immune as we think to the cant and propaganda of Il Duce’s Italy.

Italian Fascism, after all, promised national greatness, unity, spirituality, and a “third way” between capitalism and socialism. Instead, it brought to the Italians World War II, the bombing and occupation of their cities, widespread poverty, and the loss of basic civil liberties. While claiming that the Fascist state “defends and protects” religion, Mussolini despised the teachings of Christianity and manipulated the Vatican to consolidate his power. Italy’s political unity was short-lived — achieved by a singular Duce with a violent disregard for dissent — and it left behind a deeply divided society.

With no sense of irony, liberals now invoke fascism as an epithet to dismiss their conservative critics. But is the echo of Mussolini more likely to be heard among the political Right? The animating spirit of fascism — its martial zeal for a statist utopian vision — seems quite welcome in the citadels of modern liberalism. The fascist negation of religious truths, by which all political choices are to be judged, has found countless disciples in progressive circles. The Fascist state “has curtailed useless or harmful liberties while preserving those which are essential,” Mussolini declared. “In such matters, the individual cannot be the judge, but the State only.”

Benito Mussolini was the first political leader to write the epitaph for liberal democracy in Europe. Yet it was liberal democracy, through a recovery of moral vigor, that managed to defeat Fascism. In the Piazza San Sepolcro in Milan, the building in which Mussolini and his followers first vowed to overthrow the established order still stands. It houses a police station. The rule of law has replaced the rule of the dictator. Once worshipped like a god, Mussolini became a pariah because of his disastrous alliance with Hitler’s Germany. He fled Milan in April 1945 but was caught and executed: Shot in the chest, his body was strung up to cheers and mockery.

It was, according to an eyewitness, “as if the whole thing was a dream from which we would awake to find the world unchanged.”

One Response to National Review: Mussolini and the End of Liberal Democracy