This article was originally posted at the National Review. 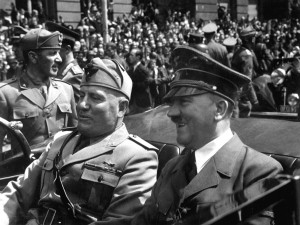 Sorrento, Italy — Even here, in this coastal haven of sun-drenched serenity, there are reminders. In the center of the Piazza della Vittoria, overlooking the Gulf of Naples, is a monument to the victims of “Mors Immortalis, 1915–1918.” It pays homage to Sorrento’s fallen, a tiny remnant of the more than 600,000 Italian soldiers who perished in the furnace of the First World War. Italy’s catastrophic decision to become a combatant in the war would echo feverishly through time: Though it emerged as one of the victors, an impoverished and embittered Italy gave birth to European fascism in a modern totalitarian state.

Italy’s foreign minister, Antonio di San Giuliano, wanted no part of the crisis that broke out in July 1914. He viewed Austrian demands on Serbia as needlessly provocative. Though Italy had an alliance with Germany and Austria, their behavior, he claimed, released his nation of its obligations. But San Giuliano died in October. By the beginning of 1915, after more than six months of slaughter and stalemate, the major Allied nations — Great Britain, France, and Russia — were desperate to lure neutral Italy into the imbroglio.

They found an ally in Prime Minister Antonio Salandra, who took over Italy’s foreign affairs. As G. J. Meyer explains in his book A World Undone: The Story of the Great War, 1914 to 1918, Salandra was a future fascist who “regarded his country’s neutrality not as a gift to be treasured but as a negotiable asset to be sold to the highest bidder.” The Allies outbid the Central Powers: In the secret Treaty of London, signed April 15, 1915, they promised Salandra numerous territorial concessions once victory was secured.

The Italian government prepared for war, mobilizing an astonishing 5,615,000 men. Hurled into the storm and steel of the Western Front, roughly 650,000 were killed, another 950,000 wounded, many grievously. My paternal grandfather, Michele Loconte, was a recent Italian émigré living in the United States when hostilities broke out. He might have been drafted into the Italian army, but instead joined the U.S. expeditionary force and was sent to France in the summer of 1918. The success of his 91st Division formed a vital part of the Allies’ “grand offensive” that crushed German hopes for victory and produced the armistice on November 11, 1918.

From the ashes of the First World War rose the modern secular zealot: the violent revolutionary who seeks to impose his vision of human perfection on society.

Political divisions were tearing the nation apart. The parliamentary government was hopelessly corrupt, the monarchy despised. There was a startling degree of poverty and one of the highest inflation rates in Europe. Many soldiers who returned to take up jobs as factory workers, clerks, or shopkeepers found civilian life frustrating and uninspiring. Erich Remarque, in his classic war memoir, All Quiet on the Western Front, described a generation of men “broken, burnt out, rootless, and without hope.”

Enter Benito Mussolini. On October 28, 1922, with 40,000 “Black Shirts” under his command, Mussolini marched on Rome. King Victor Emmanuel and his embattled government lost heart, and Mussolini’s Partito Nazionale Fascista swept into power. “Il Duce” became the first European leader to dispense with multi-party democracy and proclaim in its place a fascist regime. “The century of democracy is over,” he said. “Democratic ideologies have been liquidated.”

What strikes the modern historian is the brazenness of Mussolini’s totalitarian vision. As he put it in his treatise on fascism:

Liberalism denied the State in the interests of the particular individual; Fascism reaffirms the State as the true reality of the individual. And if liberty is to be the attribute of the real man, and not of that abstract puppet envisaged by individualist Liberalism, Fascism is for liberty. And for the only liberty which can be a real thing, the liberty of the State and of the individual within the State. Therefore, for the Fascist, everything is in the State, and nothing human or spiritual exists, much less has value, outside the State. In this sense Fascism is totalitarian.

Many found its principles compelling. By the mid 1920s, fascist groups took root all over Europe. In each case they brought with them Mussolini’s totalitarian agenda and taste for political violence. Within a decade, fascist or quasi-fascist regimes established themselves in Spain, Portugal, Poland, Hungary, Austria, Greece, Romania — and Germany. What explains its appeal in the post-war years?

Part of the answer is that the Great War discredited not only the democracies that waged it but also the religious institutions that legitimized its ruthless ferocity. In Italy, as in much of Europe, the breakdown in historic Christian belief proceeded with the collapse of liberal democratic ideals. In their wake was a yearning for a mythical national past: the desire for a life that could fulfill the destiny of the nation, to recall its ancient glory. Fascism seemed to speak to this spiritual need.

Thus from the ashes of the First World War rose the modern secular zealot: the violent revolutionary who seeks to impose his vision of human perfection on society. In a way no one could have foreseen, Italy’s tragedy became the world’s tragedy.

Its victims, though, are not hard to find. We can encounter them in places seemingly untouched by the horrors of war, in Sorrento, where a stone memorial in a quiet piazza bears their names: Esposito, Izzo, Lanza, Russo, Scarpato, Toscano. We just need eyes to see them.

Joseph Loconte is an associate professor of history at the King’s College in New York City and the author of A Hobbit, a Wardrobe, and a Great War: How J.R.R. Tolkien and C.S. Lewis Rediscovered Faith, Friendship, and Heroism in the Cataclysm of 1914-1918 (forthcoming).