National Review: Classical Liberals vs. National Conservatives in the Age of Coronavirus 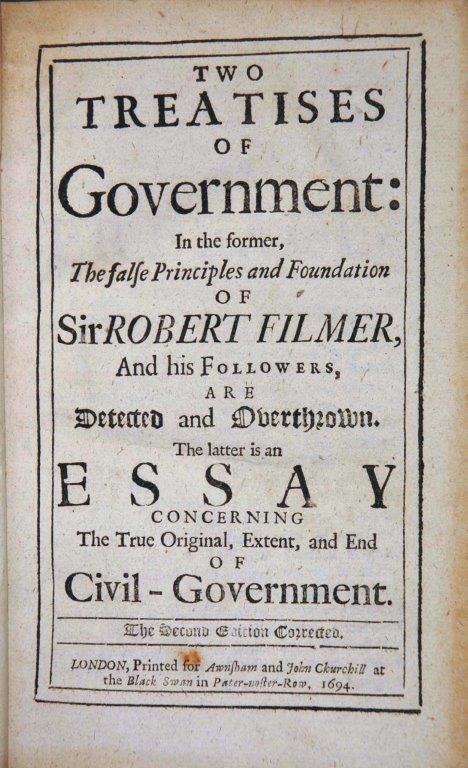 Over the past few years, a small but growing cadre of religious conservatives has decided that classical liberalism — grounded in a belief in the natural rights and freedoms of the individual — is a grotesque mistake. The coronavirus pandemic should prompt this crowd to do a little soul-searching.

Despite their differences, liberalism’s right-wing critics are united in their fierce antagonism to John Locke, whose doctrine of government-by-consent inspired the American Revolution and informed the Founding. According to Yoram Hazony, the Jewish philosopher and author of The Virtue of Nationalism, Locke’s account of human nature amounts to “a far-reaching depreciation of the most basic bonds that hold society together.” Similarly, Patrick Deneen, a Catholic political scientist and author of Why Liberalism Failed, denounces Locke’s theory of consent as “one of liberalism’s most damaging fictions,” a solvent of community, morality, and religious belief. Locke’s vision of human flourishing, they say, was really no different than that of Thomas Hobbes.

All of this talk began before the onset of the coronavirus pandemic, which has given most of us a more intimate taste of what it might be like to live under Hobbes’s Leviathan: “For by this authority . . . he hath the use of so much power and strength conferred on him that, by terror thereof, he is enabled to form the wills of them all, to peace at home, and mutual aid against their enemies abroad.”

Most states have imposed severe lockdown measures, constraining and disrupting the lives of hundreds of millions of people. Public gatherings — including peaceful protests — have been outlawed. Schools and colleges have closed their doors. Religious services have been banned, and would-be worshippers harassed by local police. Thousands of businesses — in every state — have been indefinitely shut down. Earlier this week, a Dallas woman was arrested, fined, and sent to jail for trying to operate her hair salon in defiance of the Texas governor’s stay-at-home rules. “Feeding my children isn’t selfish,” she said. “I am not closing the salon.”

In Locke’s Second Treatise of Government (1689), he named “life, liberty, and property” as among the natural rights of man that governments were instituted to protect. By property, he meant much more than a person’s wealth and belongings. “Every man has a property in his own person. This nobody has any right to but himself,” he wrote. “The labor of his body, and the work of his hands, we may say, are properly his.”

Locke’s critics, who often appear not to have read his actual works, see only mindless and clawing consumption at the root of his worldview. But the Second Treatise leaves no doubt about the divine prerogative and the moral obligations that flow from it: Our equality “by Nature” forms “the foundation” of “that obligation to mutual love amongst men” and “the duties they owe one another,” namely, “the great maxims of justice and charity.” Locke then cites the golden rule to insist upon “a natural duty” to love our neighbors as we love ourselves. In a slap at political absolutism, he invokes the authority of the God of the Bible: “For men being all the workmanship of one omnipotent and infinitely wise Maker . . . sent into the world by His order and about His business; they are His property, whose workmanship they are made to last during His, not another’s pleasure.” Locke’s conception of human flourishing ultimately depends upon his belief that every person is endowed by God with creative powers and is called — in freedom — to engage in meaningful, honorable, productive work.

The Leviathan — now embodied in government at all levels — inevitably has other ideas. About 30 million Americans have filed for unemployment since the onset of the coronavirus. The unemployment rate for April is expected to top 15 percent, the highest since the Great Depression. Tens of thousands of small business have been devastated, and many will never recover. The human suffering involved in this cataclysm — drug abuse, depression, suicide, and the delaying of surgeries, cancer treatments, etc. — cannot be calculated. The virus would’ve taken a severe toll on American society regardless of the public-policy response to it, but evidence is mounting that the government’s Draconian pandemic-response measures have played a role in making things worse.

Said measures have been undertaken in an effort to “flatten the curve” and “save lives.” It’s a rationale Hobbes would surely applaud: “And though of so unlimited a power men may fancy many evil consequences, yet the consequences of the want of it, which is perpetual war of every man against his neighbor, are much worse.” Having lived through the English Civil War, Hobbes did not believe that people could be trusted to govern themselves. Aided by a phalanx of medical authorities, neither do many of our political leaders, regardless of the facts on the ground.

Locke took a different view, devoting his political career to the defeat of the authoritarian forces that were trampling basic civil liberties, ruining economies, and destroying the social fabric of Europe. His remedy was a political society designed — and limited — to preserve our natural, inalienable rights to life, liberty, and property.

Government by consent involves risks, but the alternative is a life of dependency, passivity, and servitude. Progressives, ever restless for centralized authority, have tried to negate Lockean ideals for decades. In a recent editorial, “The America We Need,” the New York Times derided classical liberals for taking “an impoverished view of freedom,” and called for a “muscular conception of liberty” that would make government the “guarantor” of universal health care, housing, and employment. What is new, and worrisome, is that some prominent religious conservatives are now singing a similar tune, while blaming Locke’s principles for unleashing selfish individualism at the expense of the common good.

According to Patrick Deneen, classical liberalism has produced “an acquired ability to maintain psychic distance from any other human.” It apparently does not occur to him that Locke’s conception of freedom — rooted in reason and Revelation — might be the best protection against a state, say, forcefully mandating our physical isolation from one another. Meanwhile, conservative Catholics such as Harvard law professor Adrian Vermeule want the Church’s theological tenets to guide the state, “because strong rule in the interest of attaining the common good is entirely legitimate.”

In short, these religious conservatives have sought an approach to political life that would treat Lockean freedoms with contempt. And the pandemic has given us a fearsome preview of what such an approach might look like.

No one should treat the lethality of this contagion lightly: We must do everything feasible to protect the most vulnerable among us. Seventy thousand deaths in a matter of months are a shocking tragedy. But only a rank materialist would disregard the social, moral, and spiritual consequences of the government’s unprecedented efforts to fight the virus. Indeed, the greater tragedy may turn out to be the subjugation of a free, prosperous, and just society by the nightmarish political creature Hobbes imagined, “that mortal god to which we owe, under the immortal God, our peace and defense.”

Previous: The Hill: Pandemics and the survival...
Next: National Review: What Winston Church...

One Response to National Review: Classical Liberals vs. National Conservatives in the Age of Coronavirus