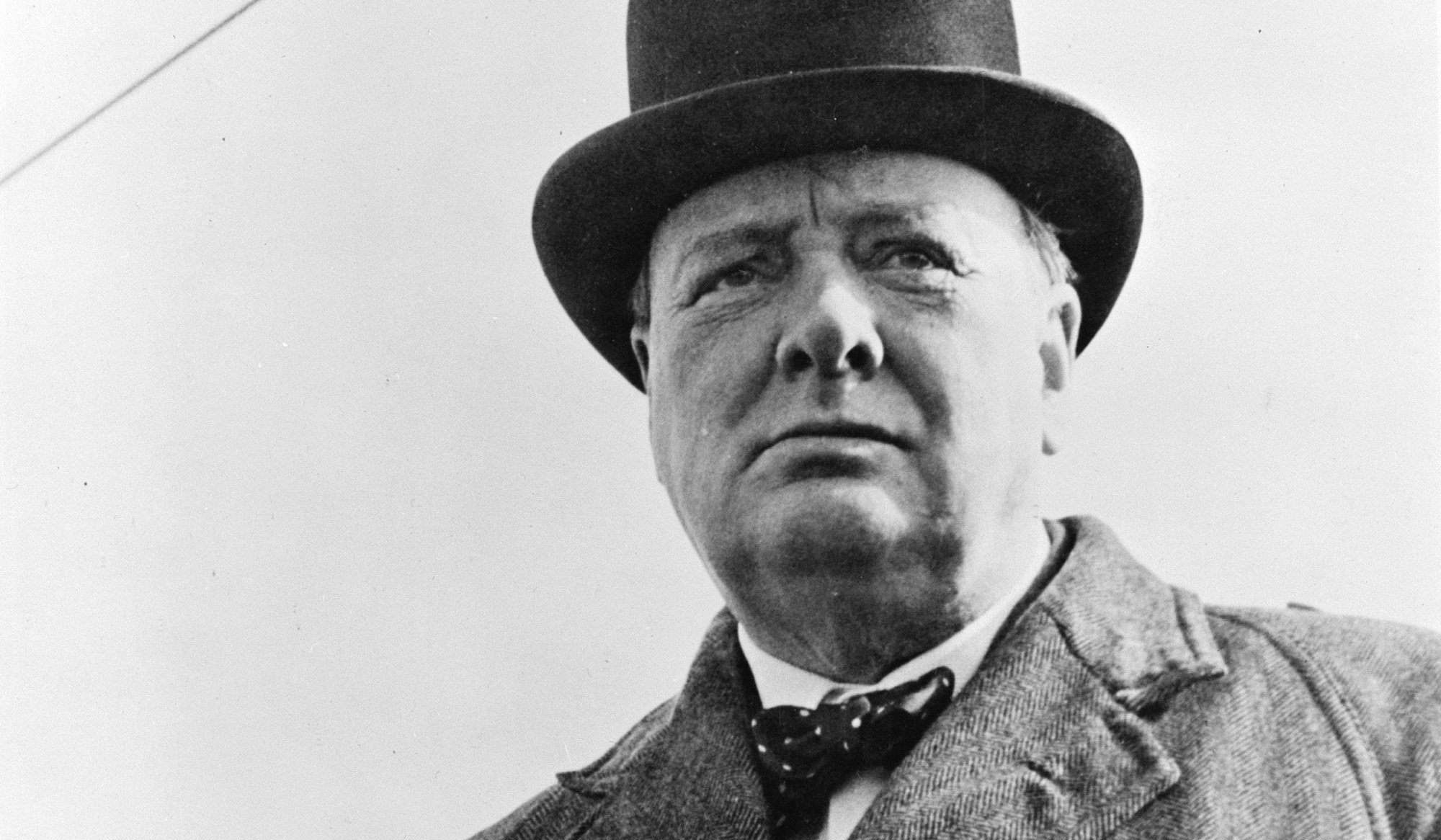 Within weeks after Nazi Germany invaded Poland, on September 1, 1939, triggering the Second World War and throwing the survival of Western civilization into doubt, Oxford scholar C. S. Lewis delivered a sermon at St. Mary the Virgin Church urging his audience to maintain “an intimate knowledge of the past.” Without such knowledge, he warned, they would be vulnerable to “the great cataract of nonsense that pours from the press and the microphone” of their age.

Those words have become a prophecy. Last week we observed the 75th anniversary of the end of World War II, but the high priests of our cancel culture do not even dimly perceive what was at stake and how our civilization ultimately survived. They do not understand that Nazism was first dealt a serious blow — perhaps an ultimately fatal one — because of the fierce resistance of the British people at a moment of existential crisis, led by a prime minister of indomitable courage.

Beginning on September 7, 1940, the citizens of London endured 57 consecutive nights of bombing raids, otherwise known as the Blitz. On the first night of the attack, 200 bombers struck the city, killing 300 Londoners. By the end of the month, 6,954 civilians would perish. Before the Nazis relented, at least 40,000 lay dead; thousands more became homeless. Every night, fires illuminated the London skies, while residents sought shelter in the city’s underground. But Londoners refused to yield.

Many explanations have been offered for their resilience, but at the heart of their story was a singular leader: Winston Churchill.

The radical Left, of course, despises Churchill as a “racist” and “imperialist.” Mobs have threatened his statue in London’s Parliament Square, which was boxed up in June ahead of a Black Lives Matter protest in Westminster. But even some conservatives downgrade Churchill’s famous eloquence as a “popular cinematic explanation” for Britain’s capacity to endure the Nazi onslaught. Writing in The Atlantic, David Brooks argues that a key to Londoners’ resilience can be found in the “intense social connections” they shared during the onslaught. “In 1940, Britain faced a uniquely evil foe. Building a sense of moral purpose was relatively easy.”

Of all the myths surrounding the triumph of Great Britain during the Second World War, perhaps this one is most removed from historical realities. Every country that had been invaded by the Nazis by the summer of 1940 — Czechoslovakia, Poland, Denmark, Norway, Belgium, Holland — was aware of the unique evil of Nazism. Every one of them collapsed, most in a matter of days. France — which had battled Germany for four ferocious years during the First World War and possessed the largest army on the continent at the start of the war — succumbed in six weeks. France’s leaders, reflecting the mood of most of the population, were under the sway of military defeatists.

Building and sustaining a sense of national purpose in the jaws of Nazi terror, rather than being “relatively easy,” was one of Churchill’s most stunning achievements. His task was made more difficult by the pacifist and progressive assumptions that fueled the culture of appeasement throughout the 1930s. Horrified by the industrial slaughter of the Great War, an entire generation of Europeans viewed Western society, in the words of T. S. Eliot, as a “wasteland” of capitalist greed, sham patriotism, and spiritual hypocrisy. Churchill was appalled when, in February 1933, the Oxford Union Society approved by a wide margin the motion: “This House will under no circumstances fight for King and country.” Oxford’s C. S. Lewis recalled the mental climate thus: “A man whose mind was formed in a period of cynicism and disillusion, cannot teach hope and fortitude.”

Moral purpose? Even after Germany’s invasion of Poland in 1939, Britain was deeply divided over its purposes on the world stage. The socialist Left was a prime source of the confusion: Having rejected democratic capitalism, they saw little distinction between Great Britain and its fascist enemies. In The New World Order (1940), H. G. Wells perfectly captured the progressive-socialist outlook: The “Chamberlain-Hitler War,” he wrote, was being fought by the “influential ruling-class people” whose “uncontrolled business methods” were facing a new reckoning. The problem, Wells explained, was not the Nazis. “It is the system of nationalist individualism and uncoordinated enterprise that is the world’s disease, and it is the whole system that has to go. . . . For in the world now all roads lead to socialism or social dissolution.”

Try to imagine Britain’s prime minister rallying his nation to fight the Nazi war machine armed with this progressive pabulum. Indeed, after the heroic but humiliating evacuation of British and French forces at Dunkirk, Churchill faced enormous pressures to meet Hitler at the negotiating table. But even such a “colossal military disaster” brought out the best in him: an iron will to meet the difficulty, whatever the costs, and carry on the fight. “Churchill repeatedly said both during the war and after that all he did was to reflect and articulate the British people’s determination to fight on until victory,” writes Andrew Roberts in Churchill: Walking With Destiny. “But he did much to create, sustain, and direct it too.”

The playwright and novelist Somerset Maugham was just one of many who experienced the force of Churchill’s vision upon the population once he became prime minister. “It was a very different England from the England I had left a few weeks earlier,” he recalled. “It was more determined, more energetic and more angry. Winston Churchill had inspired the nation with his own stern and resolute fortitude.” In Churchill: A Life, Martin Gilbert, Churchill’s official biographer, emphasized Churchill’s stubborn faith in the British people. “His finest hour was the leadership of Britain when it was most isolated, most threatened and most weak; when his own courage, determination and belief in democracy became at one with the nation.” William Manchester in The Last Lion (Vol. 3, the last volume in the series), concludes thus: “Churchill’s defiant spirit set the whole kingdom afire.”

How did he do it? We need not exaggerate the sway of Churchill’s radio broadcasts during this period. From May until December 1940, Churchill delivered only seven speeches over the BBC. Erik Larson, in The Splendid and the Vile, downplays their effect on British morale, pointing instead to symbolic actions such as the introduction of anti-aircraft guns into London. Nevertheless, by virtually all accounts, the combined impact of his wartime speeches was enormous. Churchill’s address on September 11, 1940 — a speech quoted by New York mayor Rudolph Giuliani after the September 11, 2001, terrorist attack that killed 3,000 Americans — was a sublime example of his wartime leadership. Warning soberly about the likelihood of a Nazi invasion, Churchill praised the Home Guard, “determined to fight for every inch of the ground in every village and in every street.” Hitler, he said, believed falsely that the indiscriminate bombing of civilians would turn the British people against their government:

What he has done is to kindle a fire in British hearts, here and all over the world, which will glow long after all traces of the conflagration he has caused in London have been removed. He has lighted a fire which will burn with a steady and consuming flame until the last vestiges of Nazi tyranny have been burnt out in Europe . . .

Churchill’s physical presence in London during the Blitz — his frequent visits to scenes of intense human suffering — connected him to the British people in ways that Franklin Roosevelt would never experience with the American public. The morning after the first raid on London, Churchill spoke to people at a bombed-out air raid shelter where 40 had been killed. When he got out of the car, survivors and relatives mobbed him, saying: “We thought you’d come. We can take it. Give it ’em back.”

It was a scene that repeated itself throughout the Blitz, and it surely contributed to the resonance of his message to ordinary Londoners. Indeed, his words conveyed a moral authority unlike that of any other wartime leader of the 20th century. Like no one else, Churchill had a mastery of the English language, a profound historical sense of Great Britain’s contribution to Western civilization, and an unshakeable confidence in the capacity of the English-speaking people to confront with nobility and bravery the darkest forces of their age.

“Churchill possessed the ability, through his oratory, to invest with majesty the deeds and even failures of mortal men,” writes Max Hastings in Winston’s War. His weaknesses could be worrisome; he did not always command the respect of the entire British population. “But he empowered millions to look beyond the havoc of the battlefield, and the squalor of their domestic circumstances amid privation and bombardment, and to perceive a higher purpose in their struggles and sacrifices.”

His words were not without effect. As soon as Hitler realized he could not bend England to his will, he turned his gaze eastward. His invasion of the Soviet Union on June 22, 1941, proved to be his undoing. Historians of this epochal moment agree: The high moral purpose of the British people did not emerge spontaneously, as if it were a sociological inevitability. In fact, it is impossible to imagine the citizens of London standing firm during their supreme hour of crisis without Winston Churchill in the center of the storm. Their unexpected defiance bought the Allies the precious gift of time: the time required to turn the tide of war.

Perhaps Churchill’s daughter, Mary, expressed better than anyone the debt the world owes to Britain’s greatest prime minister. “In addition to all the feelings a daughter has for a loving, generous father,” she wrote, “I owe you what every Englishman, woman and child does — Liberty itself.”