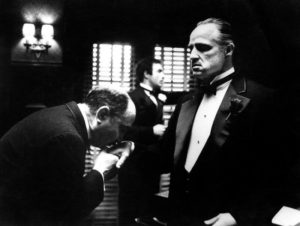 The tragicomic irony of Chris Cuomo’s pugilistic outburst earlier this week — cursing and physically threatening a man for taunting him with a reference to the movie The Godfather — is that the CNN anchor reinforced the usual tropes about Italian Americans. We are all wise-guys, goons, and Mafiosi, just itching to beat the stuffing out of anyone who gives us the malocchio, the evil eye.

“No, punk-ass b—es from the right call me ‘Fredo.’ My name is Chris Cuomo. I’m an anchor on CNN,” Cuomo says in a video that went viral. Cuomo is painfully aware that conservative talk-show hosts routinely refer to him as “Fredo,” i.e., Frederico Corleone, the dumb, wimpish brother from the Godfather trilogy.

The argument between the two men escalates:

“What are you going to do about it?”

Cuomo: “I’ll f—ing ruin your sh—t. I’ll f—ing throw you down these stairs like a f—ing punk…Take a swing, c’mon boy.”

In his feverish imagination, Cuomo is gallantly defending his honor and ethnic heritage in front of his wife and nine-year-old daughter. In his stunted emotional world, threatening to maim or murder a man for calling him an idiot should inspire admiration.

And it does, beginning with CNN. “Chris Cuomo defended himself when he was verbally attacked with the use of an ethnic slur in an orchestrated setup,” wrote CNN spokesman Matt Dornic in a statement. “We completely support him.” People as ideologically diverse as actor Alec Baldwin and Fox News host Sean Hannity — who seem to know as much about Italian Americans as they do about anger management — offered their support. What Cuomo and his defenders cannot understand is that rather than exonerating himself, he reduced himself to a cultural stereotype.

Other than Chris Cuomo, no Italian American thinks that “Fredo” is the moral equivalent of the N-word to African Americans. In fact, we have a much more colorful stock of words to insult people for their lack of intelligence or other infirmities. Let me share a few.

There is the provocative scungille, which literally means a large snail. We might toss them in a salad or serve them in a red sauce (scungilli a la marinara). But, as urban dictionaries indicate, we often use it to mean “a slow person who cannot perform ordinary tasks.” At a baseball game, for example, if an infielder for the home team keeps bobbling routine ground balls, we might say, “Get that scungille off the field.”

There is the rhythmic mammalucco. It means a chump, a patsy, a guppy. As the older Italian brother might say, “My sister is dating a real mammalucco.”

There is the innocuous-sounding ciuccio, which literally means a baby’s pacifier. But we use it (along with the abbreviated slang chooch) to mean a moron or a jackass: “Tony gambled away his nest egg for retirement. What a chooch.”

There is the unpleasant fa schifo, which means “you make me sick, that’s disgusting.” Italian mothers use this phrase all the time, usually aimed either at their husbands or whatever mess their children are getting themselves into.

And there is the lyrical mezza stunad, a Loconte family favorite. It is derived from the Italian stonato, “out of tune.” It means you have your head in the clouds, or you’re not paying attention to reality: “Hey, mezza stunad, you walked right past me and didn’t say hello.”

My father was born in southern Italy, near Bari, and my mom’s family (Aiello) emigrated from an island off the coast of Naples, and so these were everyday expressions in the Loconte household.

I should add that throughout the years of the Clinton administration, my father became very fond of the word bugiardo, which means liar. Which brings us back to Chris Cuomo. There is nothing racist about being called Fredo. It means you are dimwitted and insecure, if sometimes well-intentioned. It was a lie to pretend otherwise — a race-baiting slander that has become the immoral reflex of the disciples of modern liberalism.

Although Cuomo has shown a glimmer of regret for his unhinged, violent outburst, he has revealed himself fully for what he has long appeared to be: a teppista, a thug in a thousand-dollar suit. Cuomo is the ugly embodiment of what is happening in elite circles in America — in politics, in the academy, entertainment, and journalism. Rational debate is being replaced by self-righteous rage, the citizen displaced by the stormtrooper.

Fredo, in fact, would be an improvement.

Previous: Wall Street Journal: The Versailles ...
Next: National Review: Oxford Don vs. the ...