National Interest: America Has a History of Pandemic Denial 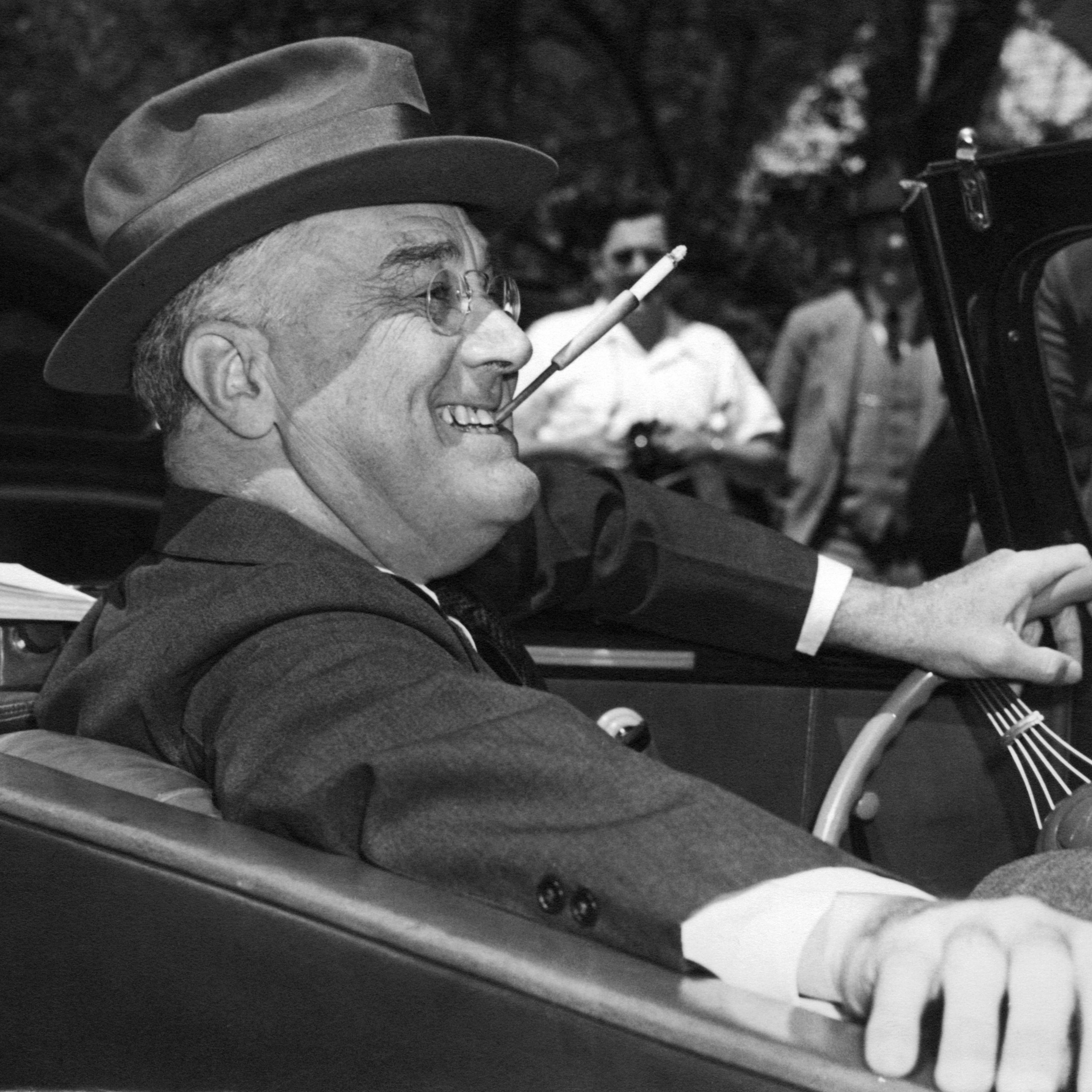 Donald Trump wasn’t the first president to misunderestimate a national threat. Franklin Roosevelt played his part in the collective denial and dishonesty of the age—until the “ideology of fascism” contagion came knocking.

FDR, we are told, realized early the threat of Nazi Germany and worked relentlessly to shake the United States out of its isolationist slumber. David Nasaw described in a book review for the New York Times that “almost from the moment he entered office, Roosevelt set out to educate the nation to the fact that the United States was threatened not only by economic depression at home, but also by fascist aggressions abroad.” Likewise, Doris Kearns Goodwin claimed that long before America went to war, Roosevelt could “recognize the future” and sought to prepare the United States for its role as the “arsenal of democracy” against fascism.

This is hagiography masquerading as history. From almost the moment FDR became president, in 1933, he adopted a foreign policy of denial, deception, and indecision: a vain attempt to insulate the United States from a new pandemic—the scourge of totalitarianism—that was spreading around the globe.

Consider that in November of 1933, after less than a year in office, Roosevelt became the first American president to formally recognize the Soviet Union—at a high-water mark of communist barbarism. In 1929, Soviet leader Joseph Stalin ordered the collectivization of agriculture, seizing the land and assets of the peasant population. Anyone resisting was sent to labor camps or executed. The result: famine and mass starvation. By the spring of 1933, twenty-five thousand people were dying every day in Ukraine, which was the grain belt of the Soviet Union. From 1929 to 1934, between ten million and fourteen million Soviet citizens perished.

Leszek Kolakowski, the Polish philosopher who rejected Marxism and inspired the Solidarity movement, has called this episode “probably the most massive warlike operation ever conducted by a state against its own citizens.” Instead of isolating the communist contagion, FDR extended an open hand: an act of genocide denial. Once he became a wartime ally, Joseph Stalin—a sadistic and murderous psychopath—was transformed by the American president into “Uncle Joe.”

Roosevelt’s posture of magical thinking stiffened throughout the 1930s as another fearsome “pandemic”—the ideology of fascism—began to threaten the freedom of Europe. Promising to tear up the Treaty of Versailles when he became chancellor in 1933, Adolf Hitler withdrew Germany from the League of Nations. In 1936, the German military occupied the Rhineland, a flagrant violation of the Versailles Treaty. The demilitarized zone in the Rhineland had been established by three separate articles in the treaty: It forbade military forces, maneuvers and mobilizations. Any breach of the treaty was considered an act of war.

The United States had never ratified the Versailles Treaty, and FDR’s response, delivered through his Secretary of State, made clear that Hitler’s intervention was not America’s problem: “It would appear . . . that the action of the German Government has constituted both a violation of the Versailles and Locarno pacts, but as far as the United States is concerned it does not appear to constitute a violation of our treaty of August 25, 1921 with Germany.” Trade with Germany continued apace.

From 1935—37, amid deepening anxiety about the possibility of another European conflict, Roosevelt signed the Neutrality Acts, prohibiting U.S. assistance to either side in a European or Asian war, no matter what the cause. “I have approved this joint resolution because it was intended as an expression of the fixed desire of the Government and the people of the United States to avoid any action which might involve us in war,” FDR wrote. “The purpose is wholly excellent, and this joint resolution will to a considerable degree serve that end.” He would soon regret it.

FDR’s admirers like to draw attention to his 1937 “quarantine speech,” in which he warned about international aggression by nations such as Italy (in Ethiopia), Japan (in Manchuria) and Germany (in the Rhineland). Roosevelt suggested that the democracies join in a “quarantine” of belligerent states:

“It seems to be unfortunately true that the epidemic of world lawlessness is spreading. When an epidemic of physical disease starts to spread, the community approves and joins in a quarantine of the patients in order to protect the health of the community against the spread of disease.”

Isolationists in both parties called it a war-mongering speech, but FDR never explained what he meant, even when pressed by reporters. He swiftly dropped the subject.

Then came the watershed acts of appeasement in 1938. In March, Germany annexed Austria, making it effectively a vassal state. There was no official reaction from Washington. Next came Czechoslovakia. Hitler signaled that he intended to bring the Sudetenland, with large numbers of ethnic Germans, back into the German fold. Tense negotiations between Germany, Britain, France, and Italy were held in September in Munich. At a dinner party, Roosevelt said that any suggestion that the United States would align itself with the democracies was “100 percent wrong.” He sent a personal note to Hitler: “The government of the United States has no political involvements in Europe and will assume no obligations in the conduct of the present negotiations.”

Hitler got the message: there would be no quarantine to check his ambitions. When British Prime Minister Neville Chamberlain returned to London waving a peace agreement with Hitler—a plan to dismember the Czech Republic—the American president sent Chamberlain a two-word telegram: “good man.” Six months later Germany took over the rest of Czechoslovakia.

In books such as Franklin D. Roosevelt: A Political Life, biographer Robert Dallek writes glowingly of FDR’s “political genius” in confronting national and international crises. Really? Even Jean Edward Smith, in his laudatory FDR, admits that “Roosevelt swam with the isolationist tide” and “kept the army on a starvation budget.”

That’s putting it gently. Roosevelt kept himself, and the American people, willfully ignorant of bitter truths as the catastrophe enveloped Europe. Even after war broke out in September 1939, after Germany and the Soviet Union invaded Poland, Roosevelt continued to deny and dissemble. He repeatedly assured the American people that the United States would remain “un-entangled and free.” He persisted with these empty pledges—despite all evidence to the contrary—through the end of 1940, when the German military had conquered much of Europe, bombed London, launched an assault on European Jews, and threatened the survival of European Civilization.

The year 1940, of course, was a presidential election year, and Roosevelt marched in lockstep with the isolationist crowd throughout his campaign. On October 30, he told a Boston audience: “I have said this before, but I shall say it again and again and again: Your boys are not going to be sent into any foreign wars.” On November 1, in Brooklyn, it was this: “I am fighting to keep our people out of foreign wars. And I will keep on fighting.” On November 2, he promised voters in Buffalo: “Your president says this country is not going to war.” British historian Max Hastings offers this rough judgment of Roosevelt’s pre-war leadership: “In the absence of Pearl Harbor, it remains highly speculative when, if ever, the United States would have fought.”

If Trump is rightly criticized for his early handling of the coronavirus outbreak and the nation’s lack of preparedness, then the heartbreaking realities of the pandemic have dampened the impulse toward complacency. In addition to a raft of draconian limitations on individuals and businesses, the president has even suggested a quarantine of New York City.

Likewise, the Japanese attack at Pearl Harbor on December 7, 1941, cured Roosevelt of his blindness to the gathering pandemic of totalitarianism. FDR successfully converted America’s industrial sector into a war machine. But he waited almost too late, and the nation was totally unprepared: America endured devastating losses against the Japanese in the Pacific and could not stage its D-Day invasion into France until June 1944.

Thus, throughout the 1930s, when the totalitarian disease was spreading globally, the democracies of the West—including the United States—appeared impotent. It was simply not true, as historian Kerns Goodwin claims, that “no one saw it coming.” The evidence of its malicious intent and power was everywhere present. Thus, W. H. Auden called the 1930s “a low, dishonest decade.” Franklin Roosevelt played his part in the collective denial and dishonesty of the age—until the contagion came knocking.

“Virtuous motives, trammeled by inertia and timidity,” wrote Winston Churchill, “are no match for armed and resolute wickedness.” It is a truth that applies equally to natural and man-made evils.

Previous: National Interest: The Future of Fre...
Next: National Review: The Queen’s S...