The Hill: On D-Day’s anniversary, Eisenhower reminds us of just war in action 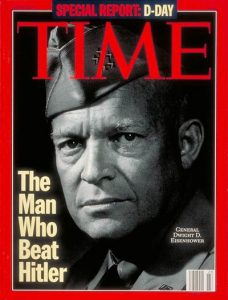 On the eve of the Allied invasion at Normandy, June 6, 1944, the architect of the greatest amphibious assault in history drafted a handwritten note, to be delivered to the press if the campaign ended in disaster. “Our landings…have failed…and I have withdrawn the troops,” he wrote. “The troops, the air and the Navy did all that bravery and devotion to duty could do. If any blame or fault attaches to the attempt it is mine alone.”

The chief reason for the stunning success of D-Day was Dwight D. Eisenhower, the supreme commander of the Allied Expeditionary Forces in Europe. Writes biographer Stephen Ambrose: “Only his worries were infinite, only he carried the awesome burden of command.” And yet the story of Eisenhower’s capacity to shoulder the terrible burden of command has largely been left untold. Of all the forces that shaped Eisenhower’s approach to war — to his responsibility as a leader in wartime — the teachings of the Bible were decisive.

He was an unlikely war hero: the third son of David and Ida Eisenhower, common laborers from Abilene, Kan. Members of the Mennonites, they were pacifist in their politics and conservative in their Christianity. They communicated to their sons the old-fashioned virtues of honesty, ambition, integrity, and fear of God. Above all else, they gave Eisenhower a reverence for the Scriptures. “Our civilization is built upon its words,” he said. “It describes the condition of man and the promise of man with such power that, through many eras and generations, it has made the mighty humble and has strengthened the weak.”

Historians tend to disregard Eisenhower’s religious beliefs as political posturing. He once remarked that “our form of government has no sense unless it is founded in a deeply felt religious faith, and I don’t care what it is.” But the remainder of the quote, uttered during the Cold War against Soviet communism, makes clear what he had in mind: “With us of course it is the Judeo-Christian concept, but it must be a religion that all men are created equal.” Eisenhower grasped intuitively the biblical taproot of American democracy.

He also believed that, even in wartime, democracy must not be defended by abandoning its central moral claim: the dignity and worth of every human soul. It is taken for granted today that the Allied forces attempted to wage a just war in Europe against the Nazis, not a brutal campaign of blind vengeance, of mass rape and mass executions. Whatever its excesses, the American-led military was not indifferent to the lives of soldiers and civilians. Moral cynicism was the defining feature of the Soviet military on the road to Berlin, not the Allied forces under Eisenhower.

To have advanced faster and further than the Russians into Eastern Europe, “it would have been necessary for the Western Allies to fight a very different and more ruthless war, at much higher cost in casualties,” writes historian Max Hastings. “Stalin and his marshals cared nothing for the preservation of civilian life or property… For all its commanders’ military sophistication, this was a barbarian army, which had achieved things such as only barbarians could.” It makes a difference if a nation’s military is led by individuals steeped in atheistic communism or rooted in the moral precepts of the Bible.

Biographers, however, often overlook a critical feature of Eisenhower’s approach as a military commander: the Christian assumptions that subordinated his ego to a noble cause. Unlike other successful generals, Eisenhower could never forget the individual human costs of war. Prior to D-Day, Ike spent many hours visiting troops in the field, because he wanted as many soldiers as possible to look into the face of the man ordering them into harm’s way. He was anxious to avoid “the unbearable burden of a conscience justly accusing me of the stupid, blind sacrifice of thousands of the flower of our youth.”

Probably no American general was more sober about the tragic nature of war. As Eisenhower put it in his farewell address as president, he had “witnessed the horror and the lingering sadness of war.” Nevertheless, he upheld the concept of the just war: the moral obligation to defend the innocent against the forces of evil. For Eisenhower, this became a personal obligation that could not be evaded, a truth he must have absorbed during the daily family Bible readings of his youth. “The only unforgivable sin in war,” he declared, “is not doing your duty.”

When Germany surrendered in May of 1945, Eisenhower was in command of more than three million American troops. An international hero, he was invited to give a speech in London, a victory celebration in Guildhall, where he would be honored with the Duke of Wellington’s sword. “I come from the very heart of America,” he said. “To preserve his freedom of worship, his equality before the law, his liberty to speak and act as he sees fit … a Londoner will fight. So will the citizen of Abilene.”

Here was a military leader who understood the political principles he felt called to defend. As he framed it in his war memoir: “We believe individual liberty, rooted in human dignity, is man’s greatest treasure.” Here was a commander of millions who submitted his own conscience to the moral demands of the Word of God. “To read the Bible,” he said, “is to take a trip to a fair land where the spirit is strengthened and faith renewed.”

Dwight Eisenhower made that trip many times during his military career, especially on D-Day. Throughout his life, Ike viewed the Bible as the Freedom Book: the basis for self-government, the bulwark against tyranny, and “the unique repository of eternal spiritual truths.” His great campaign, launched 74 years ago, helped to liberate a continent and to reassert these truths in the fog of war.