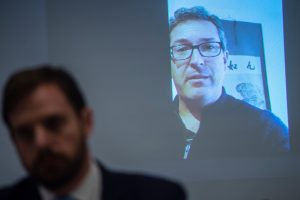 LONDON—If we needed more evidence of China’s deep insecurity about its communist rule, it could be found in a sleepy bedroom community outside London. On the day of my arrival recently at the home of Benedict Rogers, a leading British human rights advocate, I learned that my friend—along with his neighbors and his 77-year-old mother—had just received the latest of a series of anonymous letters attacking him for his criticism of China’s policy toward Hong Kong. The letters were postmarked from Hong Kong.

“In more than two decades of human rights advocacy work, including working on countries such as North Korea, Burma and issues such as radical Islamism in Pakistan and Indonesia,” Rogers told me, “this is the first time I have ever received letters of this kind or been subjected to this type of attempt at intimidation.”

When Great Britain transferred sovereignty of Hong Kong to China in 1997, Beijing agreed by treaty to respect the political and economic freedoms of the semi-autonomous city—the “one country-two systems” principle. Instead, China has orchestrated a campaign to erode Hong Kong’s civil liberties, prompting Rogers to launch Hong Kong Watch in 2017. He also has been a vocal critic of Beijing over its human-rights record. Last year, he was denied access to Hong Kong by immigration officials, ostensibly as a “threat to national security,” a claim echoed in the defamatory letters sent to his home. Two letters sent to his neighbors in Surrey instructed them to “keep an eye” on Rogers and included a photograph of him with the caption, “Watch him.” The letter to Rogers’s mother complained that he had “decided to take on a ‘crusade’ like attitude towards my country China and city Hong Kong,” and urged her to “talk some sense into him.”

Although Rogers says he doesn’t know the source of the anonymous correspondence, experienced observers from China and Hong Kong say that it is a common tactic of the Chinese regime. In October 2017, for example, a series of anonymous letters similar to those sent to Rogers and his neighbors were delivered to staff members at the Hong Kong Free Press, accusing them of spreading “hatred and dividing Hong Kong, China society.”

Rogers—like his mother, whom I have met—is not a wilting wallflower. As deputy chairman of the Conservative party’s Human Rights Commission, he has traveled extensively in China and southeast Asia and written widely about human rights abuses in the region. He told me that he established Hong Kong Watch because he believes that China is violating the terms of the Sino-British Joint Declaration, a legally binding treaty at the United Nations that safeguards the “rights and freedoms” of Hong Kong citizens. Those rights—which are not protected in communist mainland China—include freedom of speech, the press, assembly, association, private property, travel, choice of occupation, academic research, and religious belief.

“In recent years, China has completely disregarded its obligations under the Sino-British Joint Declaration, and trampled with increasing vigor on Hong Kong’s freedoms,” Rogers says. “Hong Kong is an international city, respected as the only city in China to have these freedoms based on the rule of law. It is therefore in all our interests to ensure that Hong Kong’s way of life is protected.”

Over the last several years, Beijing has become less tolerant of any signs of dissent across its territories, and President Xi Jinping has set the tone. “The party exercises overall leadership over all areas of endeavor in every part of the country,” Xi told delegates at a recent Communist party Congress meeting. No aspect of civil society, it seems, is beyond party control: All “socialist literature,” he explained, must extol “our party, our country, our people, and our heroes.”

Thus, five Hong Kong booksellers who went missing in 2015 turned up in the custody of mainland Chinese authorities. Control of all print media, including books, is now in the hands of the Communist party’s Central Propaganda Department. Also in 2015, the government targeted about 300 human rights lawyers, legal staff, and activists across 25 provinces, harassing, arresting, and detaining many of them for months. Earlier this year, China demanded that more than 30 international airlines, including some American carriers, delete from their websites any information suggesting that Taiwan, Macau, or Hong Kong are not part of China.

“It is increasingly clear that China is reaching well beyond its borders to silence critics, at the same time as becoming ever more repressive of dissent and debate within China,” Rogers explains. “Xi Jinping has presided over the worst deterioration in human rights in China since the Tiananmen massacre of 1989.” That’s no exaggeration.

Nevertheless, among Western political and economic leaders, the idea persists that the price of trade with China is silence on human rights. Some U.S. lawmakers have grown increasingly critical of China’s policies toward Hong Kong, including Rep. Chris Smith (R-N.J.), Sen. Marco Rubio (R-Fla.), and Sen. Ben Cardin (D-Md.), who introduced legislation authorizing “punitive measures” against government officials in Hong Kong or mainland China who are responsible for “suppressing basic freedoms in Hong Kong.” But the bill has yet to receive a hearing in either the House or Senate. In December, the Trump administration included on a sanctions list a Chinese police official it held accountable for the death of a rights activist, Cao Shunli, in 2014. However, the Washington-based Chinese Human Rights Defenders expressed “regret that the US Administration only named a low-level Chinese official.” The Washington Post reported in late June that Sam Brownback, the U.S. ambassador-at-large for religious freedom at the State Department, was urging the White House to punish Chinese officials cracking down on faith groups.

In the meantime, Beijing will continue to try to bully anyone—anywhere—who challenges its morally debased communist narrative. “If we do not act, to defend our values of democracy and human rights and to speak up for those who are repressed,” Rogers warns, “we will find China becoming ever more intrusive and invasive.”