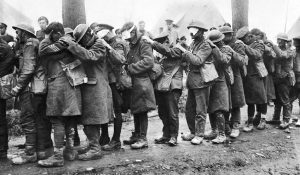 In the spring of 1918, Germany and the Central Powers staged a final massive offensive that threatened to overwhelm British and French forces along the Western Front. Sir Douglas Haig, commander of the British Expeditionary Force in Europe, issued the order: “Every position must be held to the last man. . . . With our backs to the wall and believing in the justice of our cause, each man must fight to the end.”

One of the young soldiers with his back to the wall was Second Lieutenant Clive Staples Lewis. A confirmed atheist at the time, C. S. Lewis would survive the storm and steel of the First World War. But the experience of war would transform him, launching him on a spiritual journey that culminated, years later, in his conversion to Christianity. He would earn worldwide fame as a Christian apologist and author of a series of children’s books, The Chronicles of Narnia, which tell the story of “a great war . . . with all the world looking on,” a battle between the forces of Light and Darkness.

On the morning of April 15, 1918, however, Lewis was a long way from the religion of the Bible. His battalion, the Somerset Light Infantry, had come under German bombardment at the French village of Riez du Vinage. After five months in the trenches, he had had enough of war: “the frights, the cold, the smell of high explosive, the horribly smashed men still moving like half-crushed beetles.” His poetry during this period rails against a silent and indifferent universe: “Come let us curse our Master ere we die / For all our hopes in endless ruin lie.” Lewis might have joined the ranks of anti-war poets such as Siegfried Sassoon and Wilfred Owen.

He might just as easily have been killed. A shell exploded nearby, obliterating his sergeant and wounding him with shrapnel. Lewis was dragged from the battlefield and taken to a hospital near Étaples. “I could sit down and cry over the whole business: and yet of course we have both much to be thankful for,” he wrote his father. “If I had not been wounded when I was, I should have gone through a terrible time.”

It was a terrible war, the most brutal and destructive conflict the world had ever seen. “When it was all over, Torture and Cannibalism were the only two expedients that the civilized, scientific, Christian States had been able to deny themselves,” wrote Winston Churchill, “and these were of doubtful utility.” On average, roughly 6,000 men were killed every day of the war. Before it was over, 9.5 million soldiers lay dead, millions more wounded. About half of the British soldiers fighting in France became a casualty of some sort. Lewis lost most of his closest friends in the final year of the conflict.

Yet the war and its aftermath seem to have stirred Lewis’s spiritual longings. On a train ride to a London hospital to recover from his wounds, he was seized by a sense of the transcendent as he beheld the natural beauty of the English countryside. “I think I never enjoyed anything so much as that scenery — all the white in the hedges, and the fields so full of buttercups that in the distance they seemed to be of solid gold,” he wrote a friend. “You see the conviction is gaining ground on me that after all Spirit does exist. I fancy that there is Something right outside time and place. . . . You see how frankly I admit that my views have changed.”

Nevertheless, Lewis insisted that he had no intention of “falling back into the most childish superstitions” of his youth. He was in good company. The mechanized butchery of the First World War instigated a mood of doubt and disillusionment among Europeans of all classes. For T. S. Eliot, the postwar world was a wasteland of despair. “I think we are in rats’ alley,” he wrote, “where the dead men lost their bones.” Erich Remarque’s All Quiet on the Western Front (1928) saw a generation of men “weary, broken, burnt out, rootless, and without hope.”

Yet, at Oxford University, where Lewis joined the faculty as a tutor in English literature, the Hound of Heaven seemed in hot pursuit. New friendships with scholars such as J. R .R. Tolkien — a veteran of the battle of the Somme and a devout Catholic — challenged his materialistic outlook. He read numerous works of philosophy and literature exploring the nature of God, myths, and the meaning of Christian atonement. “Now that I have found, and am still finding more and more of the element of truth in the old beliefs, I feel I cannot dismiss even their dreadful side so cavalierly,” Lewis admitted to a friend. “There must be something in it: only what?”

What Lewis found was something the Great War nearly destroyed for him: an explanation for his deepest longing, the desire for joy. What he discovered, from his own careful study of the gospels, helped him to cast off his doubts: a vision of God’s grace as well as his holiness. Here, in the life and teachings of Jesus, was “the only comfort” as well as “the supreme terror.”

Perhaps this was one of the lingering effects of Lewis’s experiences at the front. The grief and horror of combat was punctuated by acts of decency, compassion, and heroism. Lewis tasted the hatreds of war, but he also knew the intense camaraderie of soldiers under fire: the fears and friendships and loyalties of men caught up in a great conflict. He could not romanticize the concept of war — “we remember the trenches too well” — but neither did he reject war as an unmitigated evil.

Instead, the intimate experience of combat helped Lewis to imagine the mythical Narnia, a kingdom that bears the wounds — and the consolations — of a world at war. Its noble king, Aslan the Great Lion, is both a warrior and a peacemaker. “This is my real country!” Lewis wrote in The Last Battle. “This is the land I have been looking for all my life, though I never knew it till now.”

Many others have made the same discovery. Lewis’s work, considered a children’s classic, has sold over 100 million copies and been translated into 46 languages. Not bad for an atheist in a foxhole.