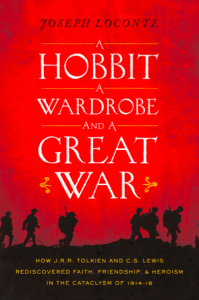 In this Evening Conversation, Loconte will share the untold story of how the devastation of the First World War shaped the moral imagination of two young soldiers, J.R.R. Tolkien and C. S. Lewis. Although the “Great War” destroyed the faith of many in their generation, Tolkien and Lewis–who fought in the trenches on the Western Front–used their literary gifts to produce epic stories about sacrifice, courage, and grace that continue to captivate millions. This is the first book to explore their work and friendship in light of the spiritual crisis sparked by the First World War.

Dr. Joseph Loconte is an Associate Professor of History at The King’s College in New York City, where he teaches Western Civilization and American Foreign Policy. Loconte previously served as a Distinguished Visiting Professor at the School of Public Policy at Pepperdine University. His insights and commentary on religion and democracy, human right, and international religious freedom appear frequently in the nation’s leading media outlets, including The New York Times,The Wall Street Journal, The Washington Post, and National Public Radio. He is also a regular contributor to the London-based Standpoint Magazine and Italy’s La Stampa.

This event is held in partnership with Pepperdine University.

Previous: The Weekly Standard: Turkey, Islamis...
Next: CNN: Should the Pope Address Climate...