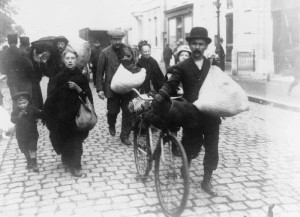 How the refugees of the Great War informed the works of two great Christian writers.

Thomas Hardy, in “Poems of War and Patriotism,” described an appalling refugee crisis in the heart of Europe a century ago. They were “pale and full of fear,” and came by the thousands to England’s shores: “From Bruges they came, and Antwerp, and Ostend, / No carillons in their train. Foes of mad mood / Had shattered these to shards amid the gear / Of ravaged roof, and smouldering gable-end.” They were families, mostly from Belgium, caught up in the German advance during the First World War.

As with the Syrian refugee crisis today, their plight touched the conscience of the West. Two of the 20th century’s greatest Christian authors, J. R. R. Tolkien and C. S. Lewis, encountered firsthand the human suffering of the Great War and enlisted their literary imagination to confront it. Their epic works — tales of valor and sacrifice in a great conflict between Good and Evil — do not evade society’s moral obligations to the victims of war.

In October 1914, the German army entered the Belgian port of Ostend, bringing most of Belgium under German occupation. Soon tens of thousands of refugees were fleeing for Great Britain, which had entered the war to defend Belgian neutrality. Many arrived in the village of Great Bookham, where Lewis was being tutored in the classics before being sent to France to fight for king and country. He wrote to his father: “Everyone at Bookham is engaged in a conspiracy for ‘getting up’ a cottage for Belgian refugees.”

In The Chronicles of Narnia, Lewis’s series of children’s books, the hardship and sense of loss endured by those caught up in war are themes woven throughout the works. In Prince Caspian, when the four Pevensie children return to Narnia after a long absence, they learn that the Telmarines rule with an iron fist and have sent the Narnians into hiding and exile. “Never in all these years,” explains Dr. Cornelius, “have we forgotten our own people and all the other happy creatures of Narnia, and the long-lost days of freedom.”

Serving as a second lieutenant in the British Expeditionary Force in France in 1916, Tolkien encountered many refugees along the Western Front. The images of these destitute families never left him.

Thus in The Lord of the Rings, Sam Gamgee and Frodo Baggins take flight from their beloved Shire, dependent on the kindness of others as they pursue their great quest to destroy the Ring of Power. “Certainly I have looked for no such friendship as you have shown,” Frodo tells Faramir. “To have found it turns evil to great good.”

We see the desperate inhabitants of Minas Tirith, escaping by wagon train before the battle of Pelennor Fields. We learn about “the Men who had come up the Greenway,” fleeing the forces of Sauron, the Dark Lord. They are refugees “on the move, looking for lands where they could find some peace.” It will not be easy for them to find safe haven: “The Bree-folk were sympathetic, but plainly not very ready to take a large number of strangers into their little land.”

Many Americans today also seem unwilling to accept even a small number of strangers fleeing war-torn Syria and Iraq. The Syrian refugee crisis — over 4 million people have left the country — has set off a debate within America’s churches about how to balance national-security interests with Christian compassion.

Even before the terrorist attacks in Paris and San Bernardino, some groups began calling for a ban on Muslims trying to enter the United States. “We urge the U.S. to stop Muslim migration,” announced Evangelicals for Biblical Immigration, “until Islamic culture comes peacefully as blessing.” Opinion polls suggest that this view is gaining ground nationally.

Yet for Tolkien and Lewis, their mythic tales — set in the crucible of war — were framed by the Christian themes of rescue and redemption. Lifelong friends who first met at Oxford in the 1920s, they both rejected the moral cynicism and agnosticism of their postwar generation. Their shared literary aim was to recover an older tradition of the epic hero, but to reinterpret the tradition for the modern mind.

Thus the most compelling characters of Middle-earth and Narnia — whether they are hobbits or elves or talking horses — owe a moral debt to the central figure of the Christmas story. In that story, a refugee family from the Middle East must flee to Egypt to escape a vicious and paranoid ruler. The experience would inform the ethics of the Nazarene: “I was a stranger,” Jesus taught his disciples, “and you invited me in.”

Previous: WNET/Channel 13: Author and Historia...
Next: Providence: End of the European Proj...