National Review: When Ronald Reagan Sent the Soviet Union to the Ash Heap of History 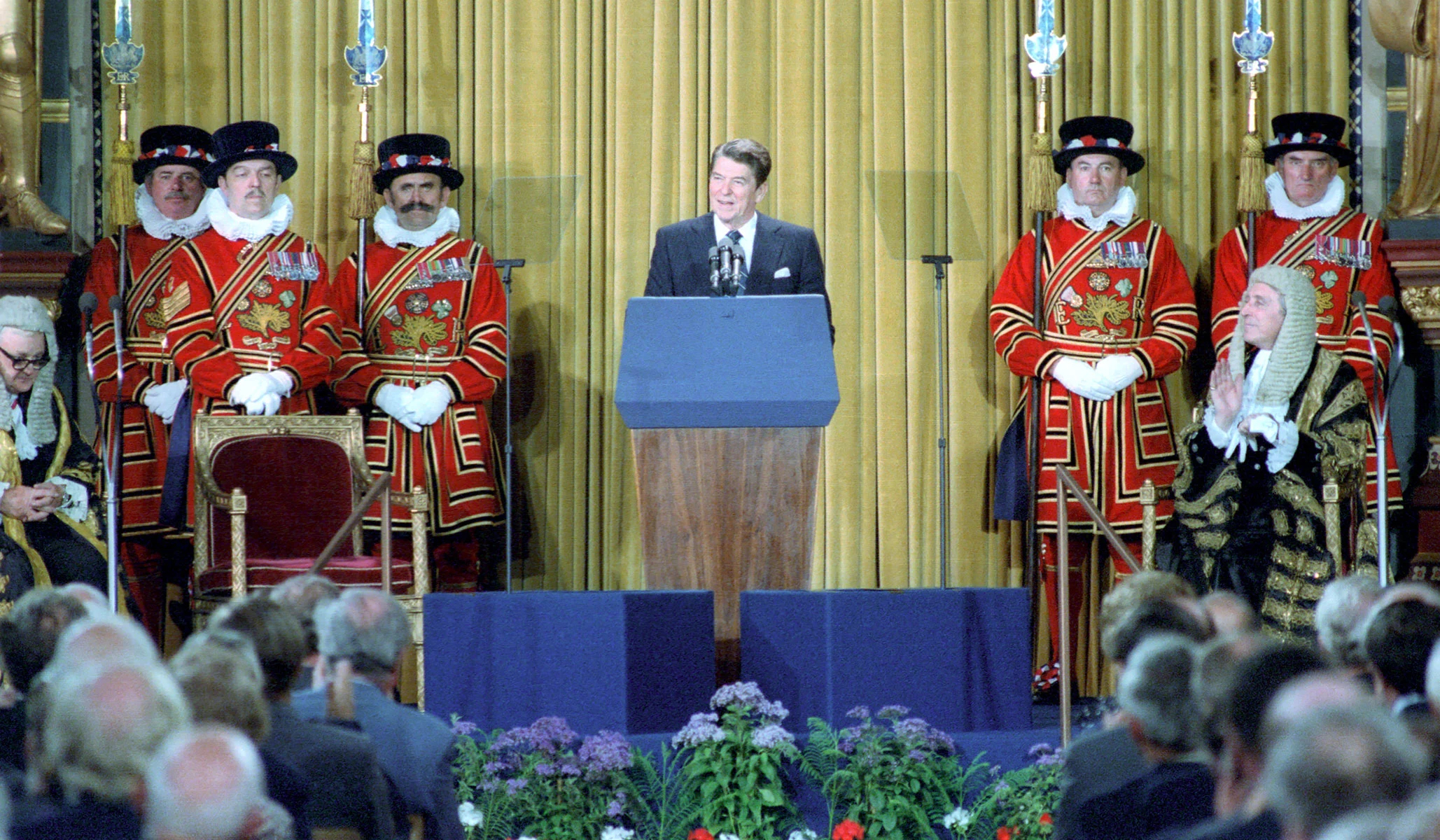 In the throes of the Cold War, when the American political and academic establishments almost in their entirety took for granted the continued strength and global influence of the Soviet Union, Ronald Reagan delivered a jeremiad against it — a prophecy about the total collapse of the Soviet communist empire.

Forty years ago, on June 8, 1982, Reagan stunned members of the British Parliament at Westminster when he turned Marxist revolutionary theory on its head:

In an ironic sense Karl Marx was right. We are witnessing today a great revolutionary crisis, a crisis where the demands of the economic order are conflicting directly with those of the political order. But the crisis is happening not in the free, non-Marxist West, but in the home of Marxism-Leninism, the Soviet Union. It is the Soviet Union that runs against the tide of history by denying human freedom and human dignity to its citizens.

Unlike today’s political Left and the New Right, Reagan believed deeply that liberal democracy — based on respect for the natural rights and freedoms of every person — was the best vehicle for human flourishing. Regimes founded upon the rejection of God and the negation of individual freedom, he said, would not endure.

Unlike today’s cynics and isolationists who reject America as a standard-bearer for democracy and human rights, Reagan announced a strategy for promoting democratic reform around the globe. “What I am describing now is a plan and a hope for the long term — the march of freedom and democracy which will leave Marxism-Leninism on the ash heap of history, as it has left other tyrannies which stifle the freedom and muzzle the self-expression of the people.”

Like no Cold War president before him, Reagan repudiated the doctrine of containment: The West would not merely restrain the growth of Soviet totalitarianism; it would triumph over it. Reagan’s rhetoric, his belief in American exceptionalism, enraged the apparatchiks in the Kremlin, as well as their liberal sympathizers in the American academy.

Indeed, it’s easy to forget that, to many in the West, the Soviet Union looked unstoppable. The Soviets had achieved strategic parity in the arms race and deployed nuclear missiles in Eastern Europe. Their satellite states were utterly compliant, and Moscow was waging proxy wars in Central America and southern Africa. The United States, by contrast, was still reeling from its catastrophic failure in Vietnam; the American economy was in a deep recession.

Thus, the popular view was one of equivalence: The United States and the Soviet Union had equally flawed, morally ambiguous political systems. They must work to “converge” and compromise for the sake of world peace. “Each superpower has economic troubles,” announced historian Arthur Schlesinger after a 1982 trip to Moscow. “Neither is on the ropes.” Harvard’s John Kenneth Galbraith parroted the Kremlin’s propaganda: “The Russian system succeeds because, in contrast to the Western industrial economies, it makes full use of its manpower.” MIT economist Lester Thurow called it “a vulgar mistake to think that most people in Eastern Europe are miserable.”

Reagan knew this was nonsense talk: He singled out and praised the democratic forces stirring in Poland. Launched in 1980, Solidarity, the first independent trade union behind the Iron Curtain, had gained more than 10 million members in a country of 36 million people. The movement was devoutly pro-Catholic, anti-communist, and pro-West. Its leaders campaigned for freedom of religion, speech, and the press and for free elections.

Six months before Reagan’s speech, in December 1981, Polish security forces had rolled into Warsaw, set up roadblocks, and arrested 5,000 Solidarity members in a single night. With Moscow’s backing, the communist regime declared martial law, driving the Solidarity movement underground. Reagan’s response to the Soviet crackdown in Poland delivered a clear message about America’s democratic objectives — unlike the mixed messages being sent by America’s response to the Russian invasion of Ukraine.

We can be grateful that the partisan voices degrading our political discourse today did not occupy the White House in 1982. The progressive Left, after all, views the United States as a racist and imperialist hegemon; the nationalism of the New Right renders it indifferent to human suffering outside our borders. Neither group would have exploited the crisis engulfing the Soviet Union.

Reagan understood that America’s security was linked to the security and freedom of Europe — and that Poland was poised to become the catalyst for massive democratic reform. “Poland is at the center of European civilization,” Reagan said. “It has contributed mightily to that civilization. It is doing so today by being magnificently unreconciled to oppression.”

As Reagan made clear in his speech, America’s plan to defeat Russian aggression involved both hard power and soft power. Reagan’s focus at Westminster was the latter:

While we must be cautious about forcing the pace of change, we must not hesitate to declare our ultimate objectives and to take concrete actions to move toward them. . . . The objective I propose is quite simple to state: to foster the infrastructure of democracy, the system of a free press, unions, political parties, universities, which allows a people to choose their own way to develop their own culture, to reconcile their own differences through peaceful means.

Toward this end, Reagan authorized the CIA to funnel tens of millions of dollars in aid to help keep the Solidarity movement alive. He launched the National Endowment for Democracy to create and nurture the civic institutions that make self-government possible. These and other efforts, in the words of John O’Sullivan, editor at large of National Review, “helped to midwife democratic revolutions around the world.” Poland, of course, was the match that ignited the political revolutions in 1989 that overturned the communist governments in Eastern Europe. The Orange and Rose Revolutions in Ukraine and Georgia also owe a debt to Reagan’s democratic vision.

After Reagan’s speech at Westminster, historian Robert F. Byrnes collected essays from 35 experts on the Soviet Union — elite thinkers in American higher education — in a book titled “After Brezhnev.” Their conclusion: Any thought of winning the Cold War was a fantasy. “The Soviet Union is going to remain a stable state, with a very stable, conservative, immobile government,” Byrnes said in an interview. “We don’t see any collapse or weakening of the Soviet system.”

Within a decade — on Christmas Day, 1991 — Mikhail Gorbachev announced the complete dissolution of the Soviet Union. The 40-year-old Cold War came to a peaceful end because American democratic capitalism had laid bare the economic, moral, and spiritual bankruptcy of Soviet communism. As Reagan told an adviser when asked about his policy toward the Soviet Union: “We win, they lose.”

Like no American leader since the Second World War, Ronald Reagan at Westminster was “magnificently unreconciled to oppression.” He sought to use the immense resources of the United States to help bring about a world in which “people are at last free to determine their own destiny.” In stark contrast, many voices today — on the left and on the right — seem to have made their peace with despotism, the administrative state, and the erosion of individual freedom.

If history is any guide, however, their outlook may find its final destination in the same tragic ash heap of human failure, disgrace, and sorrow.

Joseph Loconte is a Senior Fellow at the Institute on Religion and Democracy and the author of A Hobbit, a Wardrobe, and a Great War. The trailer for the forthcoming documentary film series based on the book can be found at hobbitwardrobe.com.