La Stampa: Cardinal Dolan, A Challenge for American Liberals. And for Obama.

Here is a Catholic leader whose record of advocacy for the poor and for social justice rivals that of any liberal lawmaker. At the same time, Dolan’s conservative Christian views on marriage and human sexuality—in perhaps the most militantly secular city in the nation—make him public enemy number one among progressives of all kinds. 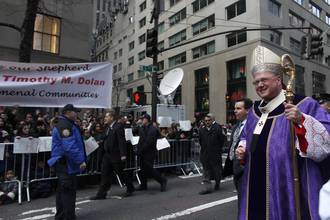 Cardinal Dolan now oversees a Catholic population of about 2.6 million souls, representing the most visible—if not the most important—Catholic See in the country. Comfortable in the spotlight, armed with a clear set of moral and religious convictions, Dolan brings two other weapons that are certain to confound his opponents: great warmth and an infectious sense of humor. Perhaps more than any cardinal in a generation, his leadership will help determine the direction and influence of Catholicism in America.

It might also help to decide the U.S. presidential election. Dolan has denounced President Obama’s health-care plan for forcing religious institutions to subsidize contraception, sterilization, and abortion-inducing drugs. In a letter meant to rally bishops around the country, the Catholic leader was unequivocal: “We strongly protest the violation of our religious freedom.” Court challenges and legislative remedies will keep the issue very much alive during the campaign.

Liberal Catholics and other progressives love to claim the Bible to justify their social agenda. But when it comes to Church teachings on marriage and abortion, their attachment to the Bible dissolves like a fly in a furnace. “We understand ourselves in far more mature, differentiated, and autonomous fashions,” claims theolgian and activist Mary Hunt.

That self-description—“mature, differentiated, and autonomous”—is a slippery and sophisticated evasion. In the best of the Catholic tradition, Cardinal Dolan symbolizes the moral consistency that his critics so conspicuously lack: Regardless of either politics or personal preferences, the faithful must allow the moral demands of Scripture to shape their everyday commitments.

Of course the Catholic Church, through its actions in the world, has failed many times to live out this ideal, often grievously. Yet Timothy Dolan’s elevation to Cardinal—in one of the most important cultural centers in the world—suggests that this holy desire is alive and well in the Holy See.

Giuseppe Loconte is professor of history at The King’s College in New York City and the author of the forthcoming book, The Searchers: A Quest for Faith in the Valley of Doubt.

Previous: La Stampa: For Obama, Freedom vs. He...
Next: Standpoint: Obama v. Madison