Joseph Loconte » Books » The Searchers: A Quest for Faith in the Valley of Doubt (Thomas Nelson, 2012)

The Searchers: A Quest for Faith in the Valley of Doubt (Thomas Nelson, 2012) 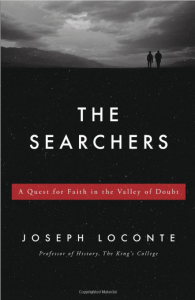 Never before had they known such hope.

In a world drenched in violence and oppression, here was a man armed with a message of peace and freedom. Into lives nearly overwhelmed by grief and sorrow, he brought compassion and healing and the deepest joy. To people who felt like outcasts and aliens, he showed the way home. And then, in one devastating night, all their hopes collapsed.

This is where our story begins—in the valley of despair. It is a tale of two friends, a stranger, and a search for truth in a world gone mad with doubt.

Historian Joseph Loconte unlocks the meaning of their exchange, set in the chaotic days following the execution of Jesus of Nazareth. Drawing from literature, film, philosophy, history, and politics, Loconte shows how this biblical drama is an integral part of our own story. Sooner or later, we will find ourselves among the searchers.

In The Press
1. CNN Interview

3. Socrates in the City Lecture

Reviews
“Every once in a while a book comes along that is so elegant and beautiful and vital, that you can’t imagine the world without it. Joe Loconte’s The Searchers is a masterpiece, one of those rare books you will want to give to almost anyone, believers and non-believers alike. It overflows with wisdom and vital information about the very thing that makes us human, our search for meaning in the universe.”

“Fresh, powerful, and often hauntingly beautiful, The Searchers starts with the well-known account of a brief, ancient journey and leads us on a tour of deep modern issues that no serious searcher can evade. With this book, Loconte moves beyond the journalist and the historian to write as a poet-philosopher on the deep questions of life.”

“Joe Loconte has written a beautiful book that is deeply Christian, but because it is so deeply particular it speaks to the universal. It is honest in its critique of religion, eloquent in its affirmation of the religious impulse and sensibility, and poetic in its description of how a living and humble faith transforms our heart and our world. The Searchers is a book every religious and secular person who is serious about living a life of meaning and purpose ought to read.”

— Rabbi Irwin Kula, president of The National Jewish Center for Learning and Leadership (CLAL) and author of Yearnings: Embracing the Sacred Messiness of Life

Eric Metaxas told Christianity Today about the top five books he recommends for nonbelievers, and Loconte’s The Searchers was #1! Here’s the snippet:

“Was there ever a more compelling writer than Loconte, who teaches history here in NYC? In The Searchers, he takes the familiar Road to Emmaus story and opens it up in fascinating ways. Along the way, he shows the infinite difference between phony religiosity and real faith in the Mysterious Stranger who appeared to the two pilgrims on that lonely road of grief.”

Read more about The Searchers on my publisher’s website. or buy now on Amazon.com!

Previous: The End of Illusions: Religious Lead...
Next: God, Lock, & Liberty: The Strug...

One Response to The Searchers: A Quest for Faith in the Valley of Doubt (Thomas Nelson, 2012)