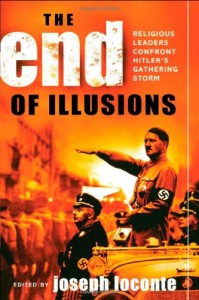 The rise of Islamic radicalism has led to heated discussions about how best to address the threat of religious terror. Disputes covering the right and wrong of war with Iraq, and the even bigger war on terrorism, continue to rage across America. But this is not the first argument of this nature—America was faced with a similar moral dilemma on the eve of World War II. Fascism was conquering Europe, and religious leaders across the nation vehemently debated how to confront Nazi Germany.

In The End of Illusions: Religious Leaders Confront Hitler’s Gathering Storm, Joseph Loconte brings together pieces from the most significant religious thinkers of the pre-war period. In these essays, the writers eloquently and passionately present their arguments for going to war or maintaining the peace. In doing so, they explore issues vibrantly relevant today, including the Christian cause for war, the problem of evil, and America’s role in the world. These urgently written pieces connect the past with the present and resonate with renewed clarity and poignancy.

Read more about The End of Illusions and learn where you can buy it on my publisher’s website!

Previous: Seducing the Samaritan: How Governme...
Next: The Searchers: A Quest for Faith in ...