Joseph Loconte » Commentary, Featured » National Review: Cicero: A Republic — If You Can Keep It

National Review: Cicero: A Republic — If You Can Keep It 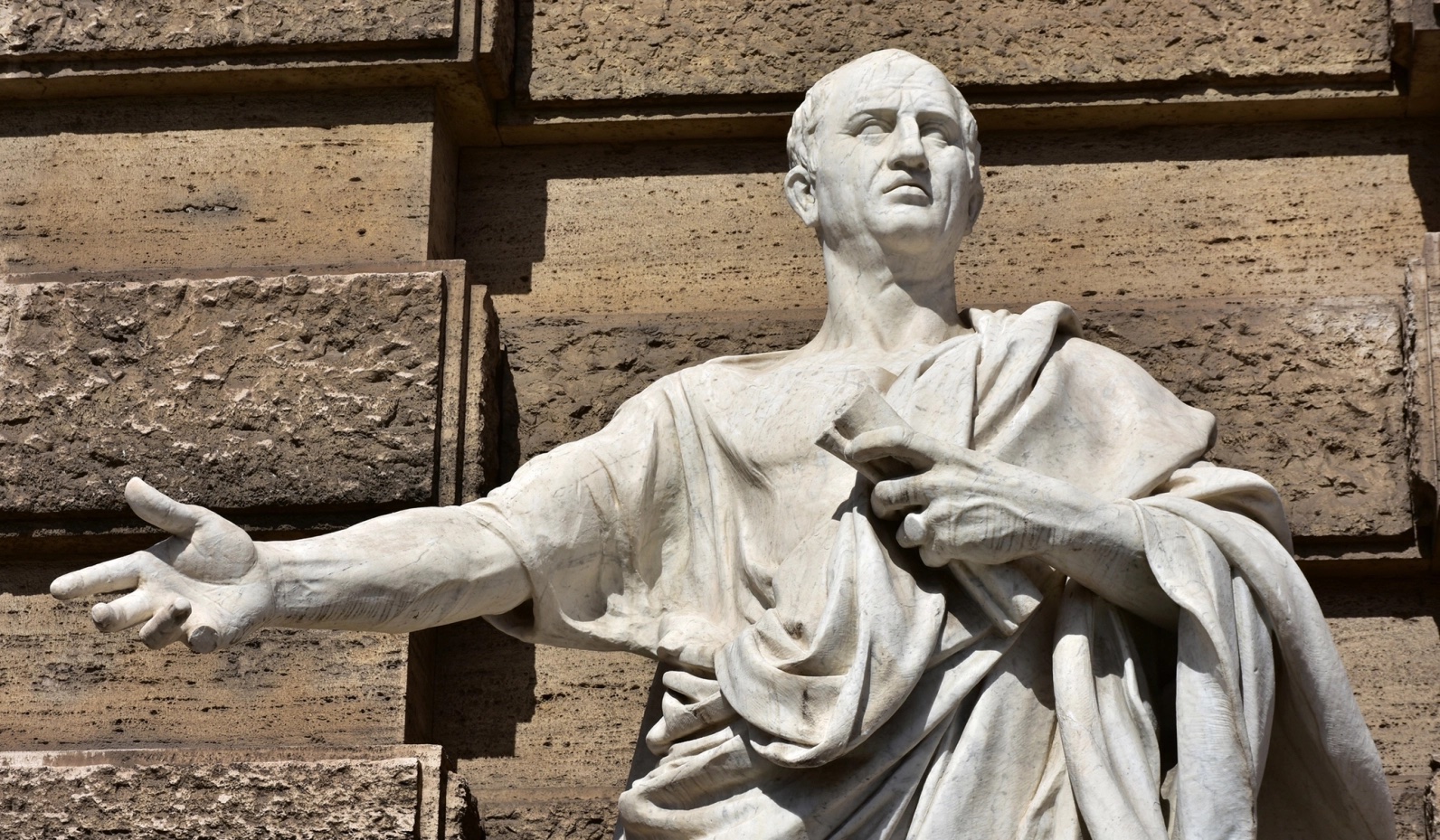 This essay series explores Italy’s unique contribution to the rich inheritance of Western civilization, offering a defense of the West’s political and cultural achievements. Find previous installments here and here.

Formia, Italy — When the American struggle for independence was beginning to look like a fool’s errand, John Adams left for Paris to help Ben Franklin secure a military alliance with the French. His ten-year-old son, the future president John Quincy, was with him when they sailed from Massachusetts in February 1778.

During the journey, Adams helped his son translate a famous address by Cicero in which he accused a Roman senator, Lucius Sergius Catilina, of planning to overthrow Rome’s republican government:

That destruction which you have been long plotting against us ought to have already fallen on your own head. . . .You will go at last where your unbridled and mad desire has been long hurrying you.

More than any other authority from the classical world, the American Founders looked to Marcus Tullius Cicero (106–43 b.c.), Rome’s greatest statesman, as they sought to design a democratic republic that would not collapse into despotism.

Cicero’s career was a cautionary tale. His decades-long struggle to preserve Rome’s republic — with its “mixed” constitution — ended here, in his seaside villa north of Naples. In 43 b.c., assassins sent by Marc Anthony, his political rival, approached him with swords drawn. “There is nothing proper about what you are doing, soldier,” he reportedly told them, “but try to kill me properly.” They cut off his head.

“Cicero came to stand for future generations as a model of defiance against tyranny,” writes Anthony Everitt in Cicero: The Life and Times of Rome’s Greatest Politician. More importantly, the writings of Tully (as his name was Anglicized) were required reading for all educated people in 18th-century Britain and the United States. As a result, writes Everitt, “he became an unknowing architect of constitutions that still govern our lives.”

Cicero’s most important contribution to modern political thought was the concept of mixed government, an idea he got from the Greeks. Plato identified three basic forms of government: monarchy, aristocracy, and democracy. In his Politics, Aristotle argued that a combination of the three, in which their powers were balanced, was the best form of government.

Cicero seized upon the concept and made it the centerpiece of The Republic (54–51 b.c.), written just before the outbreak of civil war. No one form of rule should be allowed to dominate the political system, he said, because “each of these governments follows a kind of steep and slippery path which leads to a depraved version of itself.” Rome’s leadership ignored Cicero’s warning, putting an end to him — and to the republic that he idolized.

The Founders knew this history well. They wanted a constitution that could weather the storms of faction, jealousy, and lust for power. As James Madison put the matter in The Federalist Papers (1787–88), the Americans sought “a republican remedy for the diseases most incident to republican government.”

And they seized upon Cicero. In his influential Defense of the Constitutions of Government of the United States (1787), which circulated at the Constitutional Convention, Adams traced the development of the balanced constitution from Aristotle to Cicero, his hero. “As all the ages of the world have not produced a greater statesman and philosopher united in the same character,” Adams wrote, “his authority should have great weight.”

The Founders also turned to thinkers such as the French philosopher Montesquieu (1689-1755), author of The Spirit of Laws, one of the great works in the history of political thought. Montesquieu famously developed a theory of the separation of powers: legislative, executive, and judicial. “When the legislative and executive powers are united in the same person, or in the same body of magistrates,” he wrote, “there can be no liberty.” Yet, in this, Montesquieu acknowledged his own intellectual debt to Cicero and Rome’s example.

In addition to his politics, Cicero was beloved among the Founders because of his eloquence. Lawyer, senator, consul, philosopher — in each of these roles Cicero honed his reputation as one of Rome’s greatest orators. Fifty-two of his speeches, including his Catiline Orations, delivered to the Roman senate in 63 b.c., have survived. In works such as De Oratore (55 b.c.), Cicero argued that the effective speaker must combine logic and wisdom with the heart of a poet and the instincts of an actor. “Nothing, therefore, is more rarely found among mankind,” he complained, “than a consummate orator.”

The American Revolution produced more than a few. By 1776, there were nine colleges in the colonies, all with essentially the same entry requirements, namely, the ability to read Cicero and Virgil in Latin and the New Testament in Greek. When he applied to King’s College (now Columbia), John Jay had to translate three orations from Cicero. John Adams, James Madison, and Alexander Hamilton faced similar requirements for their entrance exams to Harvard, the College of New Jersey (now Princeton), and King’s College, respectively. As president of the College of New Jersey (1765–1792), the Reverend John Witherspoon transformed the school into an academic training ground for statesmen, elevating rhetoric along Ciceronian lines. (Witherspoon named his home Tusculum, after Cicero’s Italian villa.)

Cicero wrote with great insight about the concepts of justice, education, morals, and the character of the ideal statesman. But perhaps his most important contribution to the American political order was his understanding of natural law.

Cicero believed that a rational Providence oversaw the world, a world embedded in divine law: a set of moral and religious truths that govern the human condition. These truths were etched into the mind and conscience of every human being. “The nature of law must be sought in the nature of man,” he wrote in The Laws. “Man is a single species which has a share in divine reason and is bound together by a partnership in justice.”

As Cicero explained it, a political commitment to justice was only possible because of the universal and unchangeable character of natural law. It alone provided “the bond which holds together a community of citizens.” His description of natural law would be embraced by thinkers ranging from Thomas Aquinas to John Locke to Thomas Jefferson:

We cannot be exempted from this law by any decree of the Senate or the people; nor do we need anyone else to expound or explain it. There will not be one such law in Rome and another in Athens, one now and another in the future, but all peoples at all times will be embraced by a single and eternal and unchangeable law; and there will be, as it were, one lord and master of us all—the god who is the author, proposer and interpreter of that law. Whoever refuses to obey it will be turning his back on himself. Because he has denied his nature as a human being he will face the gravest penalties for this alone.

The great innovation of the advocates of republicanism in the 17th and 18th centuries was to base their arguments for “unalienable” natural rights on a universal natural law. Neither Cicero nor any of the other classical philosophers made this conceptual jump.

In the history of political theory, the most developed and persuasive account of natural rights appears in Locke’s Second Treatise of Government (1689), the document that helped to ignite the American Revolution. It is no accident that Locke absorbed the writings of Cicero and deployed his natural-law concepts for his own revolutionary purposes. Indeed, in explaining the potency of the Declaration of Independence, Jefferson confessed thus: “All its authority rests, then, on the harmonizing sentiments of the day, whether expressed in conversation, in letters, in printed essays, or the elementary books of public right, [such] as Aristotle, Cicero, Locke, Sidney, etc.”

With the ideals of Western Civilization under intense assault, how should we evaluate Cicero’s legacy? The remains of an ancient villa in Formia are said to contain his tomb, an easily overlooked tourist destination. His statue sits majestically in front of the Palace of Justice in Rome, home of Italy’s Supreme Court. That seems fitting. In his political theory and his public career, Cicero embodied an outlook that is essential for a healthy democratic society: an authentic passion for justice. “Nothing can be sweeter than liberty,” he wrote. “Yet if it isn’t equal throughout, it isn’t liberty at all.”

For all his faults and personal ego, Cicero also possessed a quality desperately lacking in our degraded political culture: the willingness to surrender power for the sake of the republic.

In his speech before the Roman Senate, Cicero exposed Catiline’s plot to ignite an insurrection across Italy and seize power. Before he finished speaking, Catiline fled the Senate; he and other leading conspirators were either killed in battle or executed. As consul, Cicero was granted emergency powers. Instead, he walked away from absolute rule and restored the republic. Cicero was awarded the honorary title of Pater Patriae, Father of the Country, the same title given to George Washington, who willingly resigned his military commission and repeatedly declined to serve as king.

“The people that is ruled by a king lacks a great deal,” wrote Cicero, “and above all it lacks liberty, which does not consist in having a just master, but in having none.” Can Americans recover Cicero’s insights into human nature and the nature of political power? Upon the answer to that question hangs the future of this republic.