This article was originally posted at The Times. 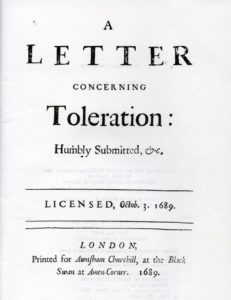 The presidency of Donald Trump, barely twenty-four hours old, has left many Muslims in the United States anxious about their futures. Although Trump has backed off his campaign pledge to ban Muslim immigration outright, talk of a Muslim “registry” persists. Some members of his cabinet, not to mention many of his supporters, seem to regard Islam as a threat to liberal democracy. Conservative Christians, a key Trump constituency, are among the staunchest advocates of curtailing immigration from Muslim-majority countries.

There is a certain irony here, especially given the Trump mantra to “make America great again.” The architects of the American experiment tethered its political ideals to religious belief: they draw on the Christian tradition as a foundation for a political society upholding justice and equity for people of all faiths.

In this the American Founders looked to thinkers such as the seventeenth-century English philosopher John Locke, who lived during a similar season of anti-Muslim fervor. The Anglican Church, to which Locke belonged, viewed itself as a bulwark against the advances of Islam and the Ottoman Empire. To many of Locke’s contemporaries, Muslims were “Scorpion Locusts” who advanced “the Satanical Kingdom of Mahomet.” Church and state were united in their hatred of the Turks, who were narrowly defeated on the battlefield on September 11, 1683, during the siege of Vienna.

Yet two years later, in the winter of 1685, Locke drafted A Letter Concerning Toleration, which advanced a concept of equal rights for Europe’s most despised religious minorities—including Muslims.

As Locke saw it, the principle of equity offered the best hope for civic peace: “But those whose doctrine is peaceable, and whose manners are pure and blameless, ought to be upon equal terms with their fellow-subject…Nay, if we may openly speak the truth, and as becomes one man to another, neither Pagan, nor Mahometan, nor Jew, ought to be excluded from the civil rights of the commonwealth, because of his religion.”

Here is the radical idea of impartial justice, applied equally to all citizens, regardless of creed. Here is the beginning of the concept of a secular commonwealth. Universally embraced by the American Founders, Locke’s Letter became part of the canon of the liberal democratic tradition.

Near the heart of Locke’s argument, however, is a deeply Christian approach to the challenge of religious pluralism. Though considered an early Enlightenment figure, Locke never abandoned his belief in Christ’s redemptive purpose for all mankind. As he argued in his Letter, the idea of religious liberty for people of all faiths was “agreeable to the Gospel of Jesus Christ, and to the genuine reason of mankind.” As Locke wrote elsewhere, Jesus “opened the kingdom of heaven to all equally, who believed in him, without any the least distinction of nation, blood, profession, or religion.”

Other reformers had interpreted the teachings of Jesus as an argument for toleration. But until Locke, no one had combined an appeal to the moral life of Christ—“the Captain of our salvation”—with such a broad and inclusive vision of a just society. According to Locke, the message of divine mercy, intended for all, carried social and political implications.

Thus Locke began his Letter with an appeal to religious leaders, the custodians of the conscience of Europe: “I esteem that toleration to be the chief characteristical mark of the true church.” From the onset of the Protestant Reformation, which shattered the unity of Christendom, arguments raged over which religious tradition bore the marks of the “true church.” Locke helped to transform the debate by putting the emphasis on acts of compassion and forbearance toward one’s enemies. “We must not content ourselves with the narrow measures of bare justice,” he wrote. “Charity, bounty, and liberality must be added to it.”

The American presidential election has exposed a deficit of charity toward our Muslim neighbors, whether here at home or toward those hoping to find refuge in the West. There are legitimate concerns about radical Islamists infiltrating and subverting our open, democratic societies. Locke, the father of modern liberalism, shared them. He insisted that religious doctrines be “peaceable”—that they conform to liberal and constitutional norms. No one should be tolerated, in other words, who openly threatened civil society.

Most Muslims, especially those fleeing the chaos and violence of war, don’t belong in this category. They need advocates, not accusers. They need more defenders who are devoted, in Locke’s words, to “the perfect example of the Prince of Peace.”

Previous: BBC Interview: What Eisenhower Might...
Next: National Interest: Can John Locke Sa...