Wall Street Journal: What World War I taught the Clergy 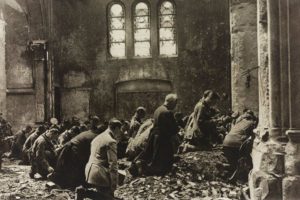 The catastrophe of World War I, which ended 100 years ago Sunday, reshaped more than geopolitics. It also transformed a generation of Western Christians from holy crusaders into antiwar activists. This shift in thinking, coinciding with the rise of European fascism, contributed to the outbreak of World War II.

Religious leaders on both sides of the conflict demonized one another and conferred divine legitimacy on their war aims. In October 1914, German theologians endorsed a letter by prominent intellectuals that declared Kaiser Wilhelm II’s war policy a defensive necessity. In turn the Allies, backed by their national churches, characterized the German leader as “the Beast of Berlin.” London’s Bishop Arthur Winnington-Ingram said churches had a duty “to mobilize the nation for a holy war.” Germany, he argued, had abandoned Christianity for paganism. “The god the German leaders worship is an idol of the earth,” intoned G.A. Studdert Kennedy, one of Britain’s best-known chaplains: “a crude and cruel monster who lives on human blood.”

Although officially secular, the French government welcomed the crusading rhetoric of the Catholic clergy and helped lead the nation into a union sacrée. American Baptist leader Samuel Batten captured the apocalyptic mood when he called the war “a continuation of Christ’s sacrificial service for the redemption of the world.”

Four years of mechanized slaughter left the righteous crusade looking like an unholy debacle. With European democracy in tatters, a profound sense of disillusionment descended. The clergy were particularly affected.

By the early 1920s, churches on both sides of the Atlantic passed hundreds of resolutions renouncing war. Membership in peace societies exploded. In 1924 the Chicago Federation of Churches, representing 15 denominations, declared itself “unalterably opposed to war.” A nationwide poll found 60% of clergymen opposed any future war and nearly half vowed not to serve as wartime military chaplains.

The pacifist outlook culminated in the 1928 Kellogg-Briand Pact. Signatories, including the U.S., Germany, Japan and France, agreed to abandon war as a tool of national policy. Church leaders mobilized for passage. The U.S. Senate ratified the treaty in 1929. The Christian Century, liberal Protestantism’s leading journal, opined: “Today international war was banished from civilization.”

Yet within a decade, a series of political crises rendered the document moot. Japan invaded Manchuria, Mussolini marched into Ethiopia, and Hitler occupied the Rhineland and annexed Austria. Meanwhile in 1933, the University of Oxford’s debating society had decided overwhelmingly “that this House will under no circumstances fight for King and country.” Neither Britain nor France was in any mood to confront international aggression. President Franklin D. Roosevelt—with enthusiastic Christian support—signed the Neutrality Acts of 1935 and 1936, banning military aid to any nation in wartime.

When Hitler orchestrated the Munich Agreement in 1938—a desperate act of democratic appeasement that dismembered Czechoslovakia for a promise of peace—church leaders rejoiced. “The peace of Munich was possible,” Jesuit priest John LaFarge Jr. wrote in the Catholic journal America, “because of the habits and methods of peacemaking learned through two decades of international intercourse in the halls of the League of Nations.” Within a year Germany invaded Poland.

Throughout the 1930s Christian leaders played down the differences between Western democracies and the fascist regimes in Italy and Germany. When Britain declared war on Germany in 1939, Charles Clayton Morrison, editor of the Christian Century, denounced a potential Anglo-American alliance as “a war for imperialism.” Harry Emerson Fosdick, the popular social-gospel minister at New York’s Riverside Church, warned that American involvement in the war against Nazism would be “a colossal and futile disaster.”

Some Christian thinkers repented their pacifism as the Nazi blitzkrieg enveloped Europe. Protestant theologian Reinhold Niebuhr, on launching the magazine Christianity and Crisis, excoriated liberal churchmen for evading the problem of radical evil: “This utopianism contributed to the tardiness of the democracies in defending themselves against the perils of a new barbarism.” Christian apologist C.S. Lewis, who fought in France during the Great War, told a friend on the eve of World War II that “death would be much better than to live through another war.” Nevertheless, he saw no moral alternative in a world ravaged by the will to power.

“We know from the experience of the last twenty years,” Lewis wrote in 1944, “that a terrified and angry pacifism is one of the roads that lead to war.” It is a truth that bears repeating as the world reflects on the tragedy of World War I.

Previous: National Review: The Maker of Middle...
Next: Weekly Standard: Tolkien, Lewis, and...