The Hill: An immigrant’s journey to US citizenship rebukes extremists in immigration debate 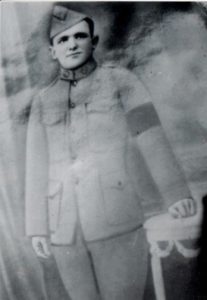 When the United States began sending troops to Europe during the First World War, European and Latino immigrants living and working in America — often amid intense discrimination — were given a chance to prove their patriotism and civic worth. If they joined the U.S. military and survived the trenches of France, they would be put on a fast track to citizenship. My Italian grandfather, 23-year-old Michele Loconte, was one of them.

Like the vast majority of the roughly 2 million Italians who arrived in the United States at the turn of the 20th century, my grandfather was looking for a better future. He found it in Brooklyn: a world away from his impoverished, small-town roots in Bitritto, a village outside of Bari. Like so many other immigrants, his journey toward citizenship — his love of country, commitment to family and entrepreneurial spirit — offers a rebuke to the extreme voices on both sides of the immigration debate.

In the years leading up to the Great War in 1914, my grandfather moved from job to job, across the United States, wherever he could find work: at an automobile assembly plant in Michigan; at the Hoover Dam in Nevada; in the vineyards of northern California. It could not have been easy. Southern Italians endured vicious stereotypes and discrimination. Referring to the influx of Italians at the turn of the century, a New York City newspaper complained: “The dam is washed away. The sewer is unchoked. Europe is vomiting!”

The influential immigration study by the congressional Dillingham Commission, released in 1911, concluded, among other things, that various types of criminal behavior “are inherent in the Italian race.”

My grandfather never played the victim. He was an exceptionally hard worker and felt lucky to be in the United States. But he also was an unskilled laborer with little education and meager English-language skills. Today, under the White House plan to favor immigrants with “professional specialized vocations,” he probably wouldn’t make the cut.

Yet my grandfather loved America. When war came, he could have chosen to serve in the Italian army, but instead he enlisted in the American Expeditionary Force, was attached to the 91st Division, and sent into some of the fiercest fighting of the conflict, at the Meuse-Argonne. He rarely spoke about the devastazione — the devastation — which he must have witnessed in France and Belgium. But his war experience deepened his attachment to his adopted country, and America made good on its promise: A hundred years ago, on Sept. 13, 1919, Michele Loconte became a U.S. citizen.

Conservatives often talk as though most of the people trying to make America their home are indolent, tribalistic and uninterested in becoming part of a larger political community. Like many recent Italian arrivals living in New York City, my grandfather found community with relatives and other Italians in his neighborhood, typically from his hometown. His parish priest was Italian. Conte Farms, the egg-butter-and-cheese delivery business, was a family affair.

But his loyalties shifted. After the Dodgers left Brooklyn, he cheered for the Mets. More importantly, he cheered for America. When Benito Mussolini seemed to be successfully modernizing Italy, many Italian Americans admired him. Once he brought fascist Italy into an alliance with Hitler’s Germany against the United States, however, Mussolini became persona non grata. When my grandfather heard Il Duce’s voice over the radio, he would holler back, “Il bugiardo!” — the liar — among other epithets.

For all of its contradictions and injustices, the American melting pot did a remarkable job of transforming millions of immigrants — often poor, uneducated and unfamiliar with stable, democratic government — into productive citizens. How, within a single generation, did it succeed?

Many liberals seem to believe that protecting our national borders is a hate crime and that upholding clear standards for citizenship is a form of cultural imperialism. But the historical record suggests just the opposite: Good policy reinforces democratic norms which, over time, convert immigrants into patriots. A 1948 graduation message from the principal at my father’s public high school in Brooklyn, printed in his journal, put it this way: “You, as graduates of P.S. 10, in an era of peace, have a great responsibility in the further building of an America of which we can continue to be proud. You will be the new car-makers, the new engineers, the new statesmen, the new voters. I hope that you will develop the good traits of character and citizenship that you have learned here.”

It was the same basic message of opportunity — and responsibility — that countless immigrants absorbed from the moment they arrived at Ellis Island.

Of the more than 1 million American soldiers deployed in Europe in 1918, about a quarter of them were foreign-born. Like my grandfather, many had seen enough of the world to believe that the future belonged to the United States. They were the kind of people that America’s leaders always expected the country to attract. As George Washington expressed it: “I had always hoped that this land might become a safe and agreeable asylum to the virtuous and persecuted part of mankind, to whatever nation they might belong.”