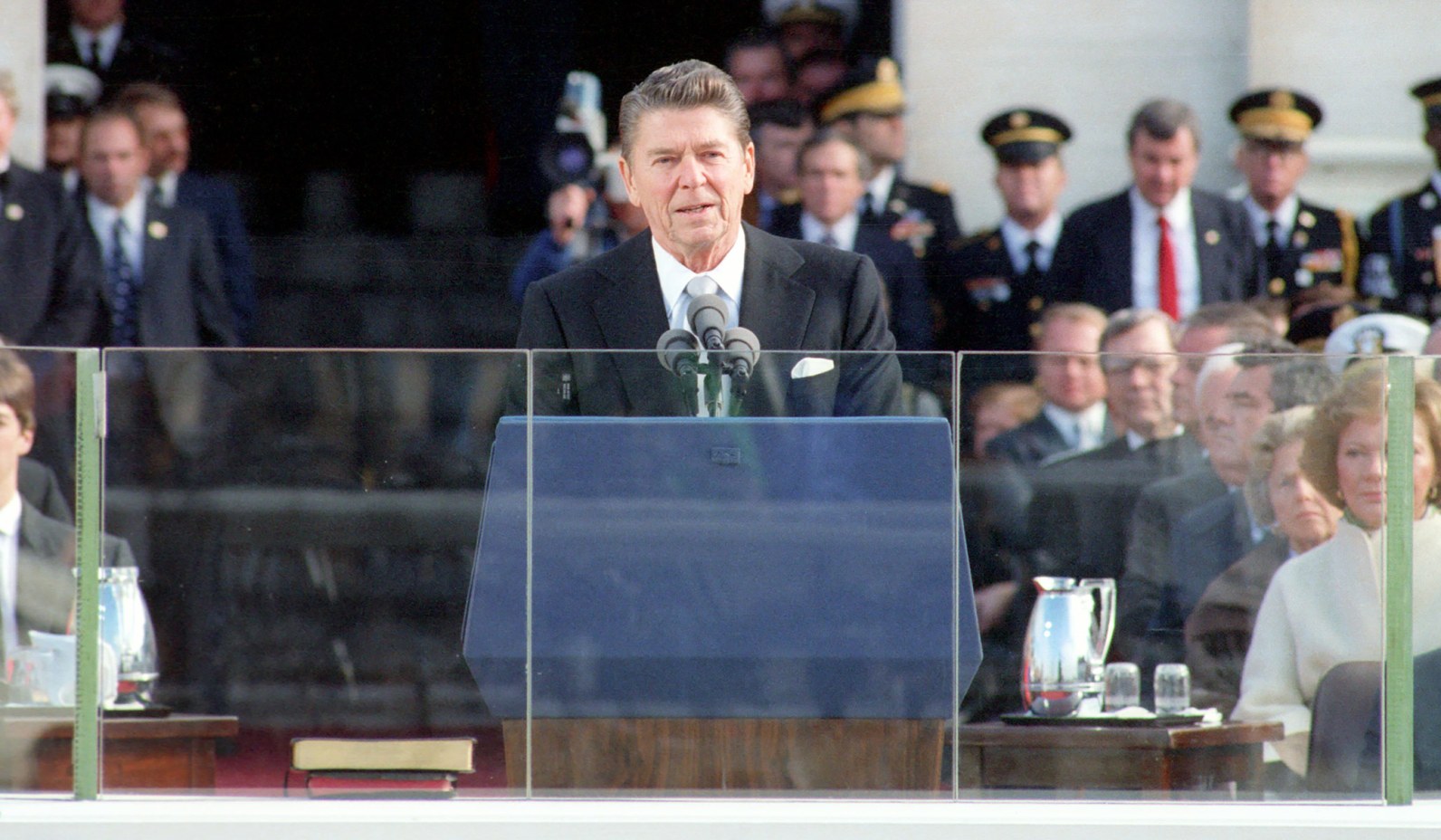 Forty years ago, on January 20, 1981, Ronald Reagan was sworn in for the first time as president of the United States. He faced turmoil at home and abroad: His Democratic predecessor, Jimmy Carter, had presided over the worst recession since the Great Depression, staggering rates of inflation and unemployment, the Soviet invasion of Afghanistan, the Iran hostage crisis, and a mood of defeatism and exhaustion in the aftermath of the Vietnam War and Watergate.

Despite all this, Reagan laid out a bracing vision of American renewal in his inaugural address. In language both plain and stirring, he appealed to the “moral courage of free men and women,” asking Americans to rededicate themselves to noble purposes. Rejecting the dreary politics of national self-loathing practiced by the Left, he revived the concept of American exceptionalism to unite and embolden a dispirited citizenry.

Though Carter’s campaign against Reagan devolved into personal attacks, Reagan never responded in kind. He thanked Carter, sitting stone-faced behind him, for offering “gracious cooperation in the transition process.” In a stunning reminder of how profoundly America’s political culture has changed, he said to Carter: “Mr. President, I want our fellow citizens to know . . . you have shown a watching world that we are a united people pledged to maintaining a political system which guarantees liberty to a greater degree than any other.” Reagan never missed an opportunity to educate the world about America’s democratic achievements.

Anticipating a rising tide of identity politics and tribalism, Reagan defended the common good. He lauded the American democratic ethos that, in times of crisis, knows no ethnic or racial divisions. “All of us together, in and out of government, must bear the burden,” he said. “The solutions we seek must be equitable, with no one group singled out to pay a higher price.” The key was to recover a vibrant, dynamic free-market economy. This objective — not massive government spending and tax increases — was the surest path to providing “equal opportunities for all Americans with no barriers born of bigotry or discrimination.”

Though it’s easy to forget at this historical distance, Reagan spoke to the populist and egalitarian impulses that continue to shape American political life. He decried the stagnant economy that “crushes the struggling young and the fixed-income elderly alike” and “threatens to shatter the lives of millions of our people.” The unemployed, he said, had been plunged into “human misery” and “personal indignity,” while those who work faced a punitive tax system that harassed them and held them back.

Reagan praised ordinary citizens — the “men and women who raise our food, patrol our streets, man our mines and factories, teach our children, keep our homes, and heal us when we’re sick: professionals, industrialists, shopkeepers, clerks, cabbies, and truck-drivers” — for their quiet courage in serving others. This was more than campaign rhetoric; it was an outlook on American civic life forged from the experiences of being born into a poor family in a small Midwestern town, living through the Great Depression, and witnessing the nation’s resilience during the Second World War.

In one moment, Reagan declared that “government is not the solution to our problem; government is the problem.” In the next, he pledged that “your dreams, your hopes, your goals are going to be the dreams, the hopes, and goals of this administration, so help me God.” Long before George W. Bush coined the term “compassionate conservatism,” Reagan envisioned a government in partnership with its citizens, one ready “to stand by our side, not ride on our back.” Together, they would care for the neighbor in need: “We shall reflect the compassion that is so much a part of your makeup,” he said. “How can we love our country and not love our countrymen; and loving them, reach out a hand when they fall, heal them when they’re sick, and provide opportunity to make them self-sufficient so they will be equal in fact and not just in theory?”

It is worth remembering that Reagan began his political journey as a Democrat and voted four times for Franklin Roosevelt. As he saw it, however, the party of FDR had gradually abandoned the concept of personal responsibility for the false security of the paternalistic state. Here, perhaps, was his attempt to realize, on conservative terms, a political society that takes care of its most vulnerable.

For the first time in American history, the inauguration event was held on the west side of the Capitol, thus facing the direction that had always symbolized the American future. (“We go westward as into the future,” wrote Thoreau, “with a spirit of enterprise and adventure.”) Looking out over the crowd of half a million people, Reagan could see the monuments to Washington and Jefferson. Beyond the Reflecting Pool sat the Lincoln Memorial, the marble temple of the Great Emancipator, the man who embodied both the tragedy and nobility of the American story like no other. Reagan’s simple tribute seems deeply relevant in our age of rage: “Whoever would understand in his heart the meaning of America will find it in the life of Abraham Lincoln.”

Gazing beyond the monuments, Reagan drew attention to the graves at Arlington National Cemetery, representing “only a tiny fraction of the price that has been paid for our freedom.” He praised the American heroes who fought and died at the Argonne, Omaha Beach, Guadalcanal, Pork Chop Hill, “and in a hundred rice paddies and jungles of a place called Vietnam.” The reference to Vietnam touched a nerve: Reagan despised the Left for treating Vietnam veterans with contempt; he was determined to valorize them instead.

America would be prepared to defend its democratic way of life on the world stage, Reagan declared, just as it always had done. “As for the enemies of freedom . . . they will be reminded that peace is the highest aspiration of the American people. We will negotiate for it, sacrifice for it; we will not surrender for it, now or ever.” The principle of “peace through strength,” important from the earliest days of his political life, would undergird his entire foreign policy. The world was already getting the message, too: Historians debate the circumstances, but even as Reagan spoke the Iranians were putting their 52 American hostages on a plane home.

Reagan’s liberal critics were wrong about him and about nearly every important political issue on which they opposed him: the dynamism of free-market capitalism, the power of democratic ideals, the nature of Soviet communism, the strategy for peacefully ending the Cold War. The progressive Left, to this day, remains in a state of denial about the man and his achievements. Some conservatives, too, seem to have forgotten Reagan’s political and moral insight. They have no memory of the fearsome cultural opposition he faced — or how he overcame it. They deride those who seek a return to his political philosophy, accusing them of dispensing “Reagan bromides” and engaging in nostalgia to evade present-day realities.

Yet, as Reagan liked to say, “facts are stubborn things.” After his first term in office, with the American economy roaring back to life and the Soviet Union in steep decline, he won a second term, prevailing in 49 out of 50 states — one of the greatest electoral landslides in American political history. Behind these facts are lessons for the intellectually curious.

Like no other political leader, Reagan united all of the major currents of modern conservatism: free-market economics, individual responsibility, limited government, a strong national defense, patriotism, populism, civic virtue, and faith. He made American exceptionalism his lodestar. Viewed objectively, his oratory — his natural eloquence, historical awareness, and moral clarity — rivals that of the greatest statesmen of the last century. Reagan neither bullied the American people nor treated them as hapless victims. He proved that the best way to move hearts and minds was to articulate a political philosophy: clearly, compellingly, and with a touch of humor that could disarm even his toughest critics.

Reagan wrote the first draft of his inaugural address and made sure that every line bore his imprint. He closed the speech with a story about sacrifice for a noble cause. As he quoted from the diary of Martin Treptow, an American soldier in the First World War, his voice cracked with emotion: “America must win this war. Therefore I will work, I will save, I will sacrifice, I will endure, I will fight cheerfully and do my utmost, as if the issue of the whole struggle depended on me alone.”

In the aftermath of last week’s riot in the Capitol, it is blindingly clear that the promise of America — the concept of government by consent of the governed — is under attack. Thus, Reagan’s vision is needed more than ever. Indeed, the outcome of this struggle depends upon its revival: on ordinary Americans, united by their love of country, fighting to preserve the world’s most daring experiment in human freedom.

Previous: National Review: Walter Hooper, R.I....
Next: The Federalist: How the Suffering of...